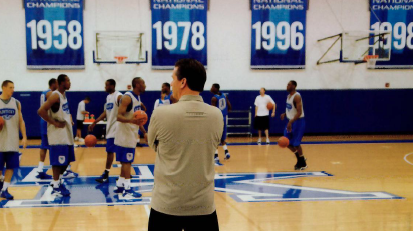 BY TOM LEACH • PHOTOS BY TIM WEBB (From the October 2009 issue of Kentucky Living.)

“Don’t measure yourself by what you have accomplished, but by what you should have accomplished with your ability. “Those words come from legendary UCLA basketball coach John Wooden. And that sentence might just sum up why John Calipari embraced the challenge of leaving the University of Memphis in late March to lead college basketball’s winningest program at the University of Kentucky. It’s a place where the bar of expectations is set at its highest level—not to win the title every year, mind you, but to at least be a part of the discussion. It’s a place where the spotlight can be withering and the demands for one’s time seemingly endless. But it is also a place with boundless support and all of the resources and assets a coach would need to achieve his goals.

John Calipari appears uniquely qualified to not only handle that environment but flourish in it. “I think particularly at the time he came along in 2009, he was absolutely the guy,” says Sporting News columnist Mike DeCourcy, a veteran observer of the college roundball scene. “In 2007 when things were less damaged, I honestly thought Tom Crean was the right person for the job. But when we got to 2009 and things were even more broken than they had been, then I think John was the perfect choice, to lift them up more quickly than anyone else could.” “Without a question, he will have a major impact,” gushes ESPN commentator Dick Vitale. “He’s a masterful communicator, especially with the modern-day athlete. If he can build programs at Massachusetts and Memphis, all I say is ‘Wow, what he’ll do with the resources at Kentucky.”

Former Wildcat star Mike Pratt assisted UK officials with this latest coaching search and he was part of Calipari’s initial interview. Pratt, who also serves as the analyst on the Big Blue Radio Network, saw a coach who welcomed the lofty expectations that come with this job. “I think that’s the most important thing. There’s a lot of guys who can coach, but this job is special, because of all that goes into it besides coaching,” Pratt observes. “There’s recruiting, dealing with the BigBlue fan base, being a part of the community. If you don’t care to do them, it’s not going to be a perfect fit. “I think Cal has very good people skills. He enjoys the interaction and I think that really helps,” Pratt continues, noting that he was particularly impressedwith the homework Calipari did before his meeting with UK President Dr. Lee Todd and Athletics DirectorMitch Barnhart. “He was so well-prepared. He really understood the big picture of the program. He understood that it’s more than about winning and losing. He understands what it (this program) means to this state,” says Pratt. “That means he had looked at this job and maybe even had it in his mind that this was the top of the ladder for him, to test his skills as a leader.”

“He likes a challenge,” says Calipari’s wife, Ellen, “and he knows this is a challenge and I think he’ll rise to the occasion. You tell him something’s hard or youcan’t do it, he will prove that you can do it. And he’lltry to do it in a different way or a better way. He’s open to new ways of thinking, which has been proven with the (dribble drive) offense that he runs for the team.” Make no mistake about the winning and losing part—if the Kentucky coach comes up short in that department, little else will matter. That is a given with programs of this stature. But coaching the game itself is a smaller percentage of the overall role of being theKentucky coach than with perhaps any other team. “He’s the CEO of this basketball program. It’s a huge responsibility. It’s like running a major company and you’ve got so many constituencies and so many things that you have to manage,” notes longtime sports marketing guru Jim Host, whose company started the UK Radio Network and grew it into the largest of its kind in the nation.”He understands that. A good CEO gathers input and then makes the final decision. A good CEO surrounds himself with people who are strong, if not stronger than he is, takes their advice, and then makes a decision,” adds Host, who says he’s never seen a college coach with better interpersonal communication skills. Ellen Calipari says that’s the management style her husband has always employed. “He sounds things off a lot of people, compiles his information, and does his homework. But in the end, he will do what he thinks is right. He’s not afraid to ask what other people think,” she says.

CBS announcer Clark Kellogg thinks Kentucky hit a “homerun” with the hiring of Calipari. Kellogg’s first major TV job was serving as analyst on the Atlantic-10 network when Calipari was coaching at the University of Massachusetts in the early 1990s, and he remembers the strong first impression he had.”He’s got tremendous energy and passion. That’s what jumps out at you. “And when you watched him work, you could see he really knew how to get the most out of kids. Terrific teacher and motivator and he knows the game,” he explains. “He’s had a varied experience as a coach. He’s been at the pro level and he’s been around some great coaches. That tends to fortify your resolve and illuminate that being who you are is how you have to roll, no matter what naysayers may say. He’s a personableand charismatic guy anyway. He has a comfort level for being in the kind of fishbowl that is unique to UK basketball.”

When Calipari steps out of that spotlight and goes home, Ellen says they don’t talk that much about work. She is her husband’s biggest fan but doesn’t follow sports much otherwise, save for the activities of their three children—Erin, Megan, and Brad. “Mostly, it’s the home front and what the kids are doing. He’s much calmer at home. He’s nothing like he is during the games. He doesn’t have that intensity level at home—or the language. That’s a work persona,” she says with a chuckle. “We do talk about the players. Sometimes I can see things from the mother side of it. Sometimes he listens and sometimes he doesn’t. That’s okay; he can pick and choose. I think the team is a big part of our life. We don’t have family around, so they’re our family. They’re welcome in our house. We care about them and want to help them in whatever way we can. I pull for them like a mom would. “There’s nothing for Calipari to prove at Kentucky as a coach. He’s a known commodity, having led UMass to its only Final Four appearance and taking Memphis to the championship game for the second time in its history in 2008. But Pratt thinks the opportunity to measure himself against the Kentucky tradition was especially appealing to Calipari. “I think what he wants to do is test his skills as a coach andmotivator against the previous guys that were there, the terrificcoaches that Kentucky has had, and the championships theyhave won. That’s where the real test is—to see if you can hang abanner and keep this program at the level those coaches did,”

Pratt says. “He’s going to be a winner wherever he is, but I sense that he wants that challenge to put his mark alongside the great coaches and the great teams that have been at Kentucky.”

Having a coach that embraces that kind of goal and has the skillset to achieve it has reignited a fire in the Big Blue Nation. “It just kind of re-energized the fan base up here,” says Ira Combs, who hosts the popular Inside the Locker Room radio show based in Hindman,  part of the Appalachian Mountains region of Kentucky. “People go through hard times up here. They’re criticized about their way of life. That ‘hillbilly’ thing hits harder up here than anywhere else in the state. As my brother Oscar (founder of the Cats’ Pause  magazine) used to say, ‘We feel rejected and neglected but when basketball season rolls around, we feel like we’re equal to anybody in the nation,” Combs adds. “Kentucky basketball is the one thing that bonds everyone when they go to their lunches every day or their churches on Sunday or their high school events on Friday night. The one thing everybody wants to talk about is Kentucky basketball. That kind of drifted into the background the last two years. No one really desired to be attached to Kentucky basketball.”

David Shelton is treasurer of the UK alumni chapter in Atlanta, the largest outside the state of Kentucky, and he has witnessed a similar reaction from fans there. “We’re really thrilled we have somebody that understands and appreciates the tradition of Kentucky basketball. He gets it,” Shelton says. “And he really expresses with sincerity what the program means to the whole Commonwealth, not just the university.”