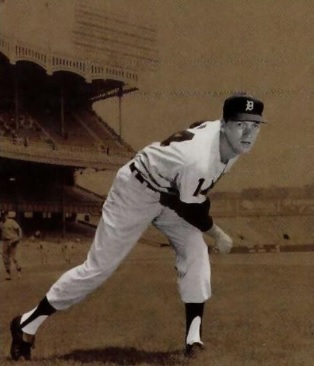 Jim Bunning pitches during a practice game with the Detroit Tigers in 1957. Photo: Photfile/Getty Images from July, 2004 Kentucky Living

You could field an excellent baseball team out of Kentucky-bred Major Leaguers—if only they’d played at the same time rather than across the 133-year history of the sport.

In a Kentucky “field of dreams” team the outfield would be anchored by Hall of Famer Earle Combs, sometimes called “the first of the great New York Yankees centerfielders.” Born in Pebworth, Combs played for the Bronx Bombers from 1924 to 1935.

Sandwich Combs between Jay Buhner of Louisville, a Seattle Mariners standout during the 1990s, and Gold Glove winner Steve Finley of Paducah, who helped the Arizona Diamondbacks win the World Series in 2001. That would leave you with strong reserves. Sitting on the bench could be Louisvillians Gus Bell, who played from 1950 to 1964, Mike Greenwell, 1985 to 1996, and, yes, Hercules Burnett, 1888-1895.

Your infield would feature a Hall-of-Famer, too: legendary Brooklyn Dodgers shortstop and 10-time All Star Pee Wee Reese, born in Ekron. Next to him you could start Travis Fryman of Lexington, rock-solid third baseman for the powerhouse Cleveland Indians teams of the late 1990s. The right side of the infield would include journeyman ballplayers from the past 30 years Denny Doyle, Glasgow, at second, and Todd Benzinger at first.

There’s no question who would be the ace pitcher. Jim Bunning, of Southgate, was inducted into Baseball’s Hall of Fame in 1996, and into the U.S. Senate, as a Republican from Kentucky, in 1998. He won 224 games between 1955 and 1971, mostly for the Tigers and Phillies. Bunning was also the first 20th-century pitcher with a no-hitter in each league.

Since we’re dealing in fantasy, we can team Bunning with a Kentuckian who pitched half a century earlier. Carl Mays, of Liberty, was a righthander on the same pitching staff with Babe Ruth when they helped carry the Boston Red Sox to World Series victory in 1918.

At catcher you could place Clarence (Kid) Baldwin of Newport, receiver for the oldest team in baseball, the Cincinnati Red Stockings, from 1885 to 1890.

And no Kentucky fantasy team would be complete without Pete Browning, the original “Louisville Slugger,” who played infield and outfield for the Louisville Eclipse of the American Association in the 1880s, and used to knock ’em out of the yard even in the “deadball era.”

In all, www.Baseball-Reference.com lists 251 Kentuckians who have played in the big leagues, from Elisha (Dale) Williams, of Ludlow, who twirled for the Red Stockings in 1876, to young players like Austin Kearns of Lexington, now with Cincinnati, and Jon Rauch of Louisville, now trying to make his mark with the Chicago White Sox.