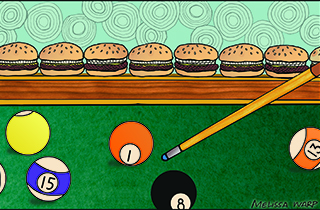 My longtime friend and onetime eight-ball opponent, Ron Bland of Bagdad, asked the other day what’s happened to all the poolrooms that once were fixtures in most towns across Kentucky.

“The answer is that small-town poolrooms went away with farming,” according to Gunnar Graven, vice president of Louisville’s Steepleton Company, which for generations has supplied tables and other equipment to poolrooms across Kentucky, Indiana, and Tennessee.

Time was when many farmers had breakfast or lunch at the local pool hall, and then spent hours shooting pool, especially in the winter months and on rainy days when they couldn’t work in the fields. But as weekend farmers with other careers replaced retiring full-time farmers, an estimated 70-80 percent of Kentucky’s poolrooms vanished.

All that lingers of many of these sanctuaries of secondhand smoke are colorful recollections of characters who passed through their doors, and aromatic, onion-laced memories of hamburgers, chili dogs, and other tasty foods from their grills. Some of the recipes were—and still are—closely guarded secrets.

Clyde Honaker Jr. of Lexington remembers “meal burgers” were the claim to fame of Jimmy “Hick” Warner’s poolroom in his hometown of Owingsville in Bath County. Hick’s wife, Margaret, mixed the hamburger with cornmeal and reportedly could get 18 to 20 burgers out of a pound of ground beef. They sold for 10 cents each with a slice of onion and mustard at no extra charge.

Kenneth Croslin of Warren County tells of seeing his brother Tommy shooting pool at Simpson’s poolroom in Bowling Green when a cue ball jumped the table on a break and splashed smack-dab in the middle of a bystander’s bowl of that poolroom’s beloved beef stew.

Most poolrooms didn’t allow women until well into the 1970s. There’s a long-ago story of a gruff poolroom owner in the rural Mason County village of Mayslick who is said to have turned away several members of an out-of-town motorcycle gang and their female companions with the matter-of-fact greeting: “Sorry, fellas, we don’t allow women in here.”

Ed Waggener of ColumbiaMagazine.com remembers that when he was a student at Lindsey Wilson College back when there were only 142 students at the Adair County school, chapel was mandatory and one of the dean’s jobs was to patrol Columbia’s poolrooms to find absentees from chapel on Wednesday mornings.

“He did the job with great zeal, at least feigned great zeal,” Ed says. “It was interesting to note that after he retired, any time he was needed he could be very often found in a poolroom.”

John Smith was in Hugh Sam Holtzclaw’s poolroom in Stanford years ago when Oscar Camenisch, a Lincoln County dairy farmer, bet someone $5 that he could eat a dozen eggs. Asked how he wanted his eggs cooked, Oscar said he didn’t. He broke 12 eggs into a glass, stirred them up, drank them down, and asked if anyone else wanted $5 worth.

BYRON CRAWFORD is Kentucky’s storyteller—a veteran television and newspaper journalist known for his colorful essays about life in Kentucky. E-mail him at bcrawford@KentuckyLiving.com.