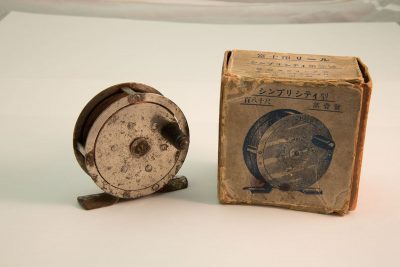 The Japanese copy and box of the Gayle No. 6 fishing reel. Photo: Gene Burch/Capital City Museum

Fishing reels and World War II? It may be hard to believe, but fishing reels—hand-tooled, precision-machined, and elaborately designed with jewels, silver, gold, and ivory handles—played a supporting role in this epic event. A new temporary exhibit at the Capital City Museum in Frankfort reveals the connection.

Beginning in the 1830s, multiplying gear bait-casting fishing reels were perfected and produced in Kentucky’s capital by a handful of highly skilled clockmakers, silversmiths, and jewelers. The names are legendary in the fishing reel industry: brothers Jonathan and Benjamin Meek, Benjamin Milam, George W. Gayle & Sons, and James Sage, who apprenticed with the Meek brothers. For all but Sage, generations of the families would remain in the trade.

Through October 2017, “Frankfort’s Fishing Reels, Jewels of the Bluegrass,” will show off about 30 of these finely wrought, customized works of art.

“There is one Smithsonian Institution-worthy artifact in this exhibit with a unique history of world history proportions,” says curator John Downs. “It is the not-so-pretty iron and brass metal working lathe of the men who made the reels.”

In the 1930s, Clarence Gayle, son of George Gayle, was the last craftsmen to own and use this lathe. The Japanese flooded the U.S. market with fly fishing reels, duplicating Gayle’s design right down to the rivet heads. In fact, these imitation reels even had Gayle’s name and the city of Frankfort stamped on them, and they arrived in similar packaging.

“The Japanese copies were cheaper and Gayle’s market dried up,” says Downs.

But there’s more to the story—and some might say it is of karmic proportions.

Gayle eventually got a top-secret government contract to make precision parts for the Clinton Engineer Works, the front organization for the Manhattan Project, which was based in Oak Ridge, Tennessee. Most of the parts Gayle milled were decoys; however, at least one part had a very special and specific objective.

“A Japanese fly fishing manufacturer wiped out Gayle’s reel-making business,” says Downs. “And he wound up making parts for the Manhattan Project, whose purpose was to enrich the uranium used in the first atomic bombs.”