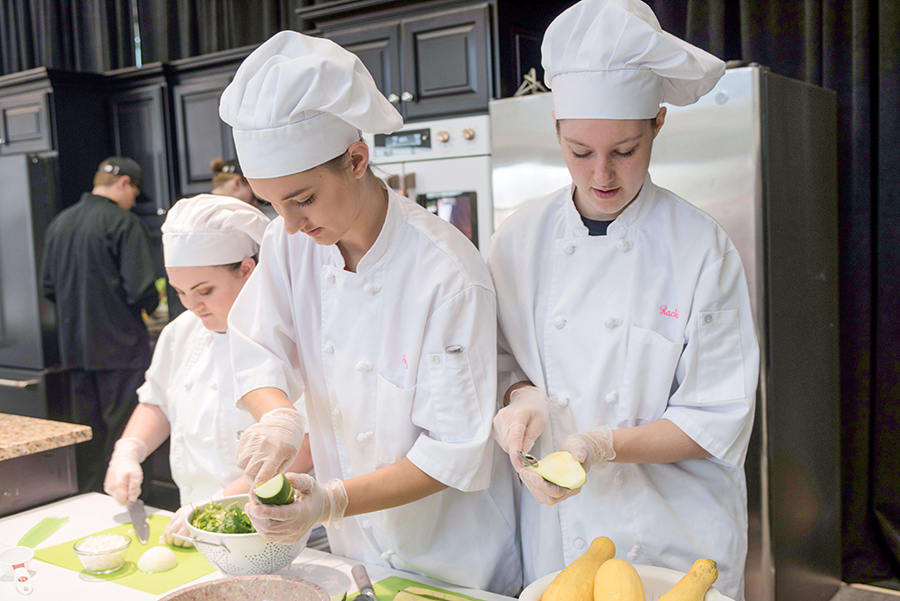 All across the state, students are mincing, measuring and mixing their way to vie for the top spot in Kentucky’s Farm to School Junior Chef competition. More than a culinary contest, Junior Chef introduces students to local agricultural producers and home-grown products, while they work as a team to create nutritious recipes and develop lifelong healthy dietary habits along the way.

The idea for the program began in 2012 when Tina Garland, Kentucky Department of Agriculture administrative branch manager, attended a national farm-to-school conference in Vermont. The event included an Iron Chef competition for students, and Garland thought a similar program would be beneficial in the commonwealth.

“We modified it to fit what we needed here, and then we launched in 2013,” Garland says.

Cooking up a competition

Eighth-graders through high school seniors form cooking teams for Junior Chef. “The team can consist of no more than five students, and no less than two,” explains Garland.

Once teams are formed, they must cook their way through rounds of district competitions beginning in April and then regional level competitions in May, similar to high school athletics. Only one team per high school can compete. “This is a really unique program, in which schools that apply can get entered into a competition, kind of a bracket challenge,” says Sean Southard, the state agriculture department’s communications director.

During each phase of the competition, students are judged and awarded points based on time management, food preparation skills and general nutrition knowledge. Creativity, innovation and taste appeal count, too. All recipes are required to meet the National School Lunch Program meal pattern and nutrition standards and must be easily replicated in a school cafeteria setting.

“It also has to be food service director-friendly because we encourage these recipes to go into schools so that they can be served on the line because these are kid-tasted and kid-approved,” Garland says.

Recipes must incorporate at least one United States Department of Agriculture commodity food item, such as unsweetened canned apple sauce, frozen broccoli florets or chicken fajita strips. Five Kentucky Proud ingredients—meats, dairy, grains, fruits and vegetables, plus sorghum or honey—must be integral to the dish, not just used as a garnish.

Winning regional teams have a few months to perfect their recipes and hone their kitchen skills before advancing to the final competition at the Kentucky State Fair in August. There, 16 teams compete with two contests daily, except for the last day when the top two teams go head-to-head in the final round.

Southard sets the scene: “There’s a full stage with two full kitchens. You have two teams competing against each other. It’s seriously like Food Network, but on a stage at the Kentucky State Fair.”

Teams have 1-1/2 hours to cook and another half-hour to clean up. No prepared foods are allowed, meaning food prep must be performed at the event.

Judging is performed by state agriculture department chefs, as well as judges from Sullivan University, a Junior Chef partner that offers scholarships ranging from $6,000 to $16,000 to all winning first- through third-place team members. Some students have already graduated from Sullivan since the competition began.

“You should see some of the faces of these high school students, who frankly, may not have had the opportunity to go to college anywhere, had it not been for this scholarship,” Southard says. “A lot of these students who go on to have these careers, they’re going to be making money doing this. It turns a life-long passion into a serious economic tool for themselves.”

The Roasting Redhounds from Corbin High School have what it takes to make it to the state Junior Chef competition. In 2017, the team won second place. Last year’s team, composed of Sierra Johnson, Kendell Lewis and Rachel Standifer, once again placed second with their recipe—Buffalo Chicken Squash and Zucchini Boat, with Strawberry-Apple Salsa.

Lester likens preparing for Junior Chef to a choreographed dance. As a result, her students are able to focus on their performance, such as knife skills, as they interact with judges, without getting “flustered on stage,” Lester says.

During the competition, she says judges want to see students who are having fun and not afraid of making a mistake.

Team member Kendell Lewis, a Corbin High senior whose family is a Cumberland Valley Electric consumer-member, says her teammates and coach became more like family throughout her experience. “During each competition, no matter what, one of us always had something to say to make the others laugh,” says Lewis. “And to me, that was the best part.”

For returning Roasting Redhounds team member and sophomore Rachel Standifer, Junior Chef is more than a competition. “Don’t focus on winning,” she says. “Yeah, that’s the goal in all competitions, but most importantly, you should have fun and bond with the rest of your team.”

Standifer, whose family is also a Cumberland Valley consumer-member, is considering opening her own restaurant or bakery in the future.

The Junior Chef competition has given Lester’s students opportunities for new experiences, such as touring Sullivan University and attending the state fair for the first time. And because of Junior Chef, the Corbin team was invited to and attended Cook Around the World, a culinary competition at Walt Disney World in Florida.

Lester says she is proud of her cooking teams and enjoys seeing their confidence grow throughout the competition. “I just like seeing them succeed, and first runner-up in the whole state is succeeding.”

Meanwhile, last year’s Junior Chef-winning high school is cooking up its entry, hoping for a repeat.

In 2018, the Harlan County High School Black Bears team—duo Kieran Chadwick and Selena Moreno—brought home the skillet trophy, on display in the school’s front office, with their Taco Poptart. The team also finished second in the Southeast Region Junior Chef Competition in May.

“This competition is a great opportunity for students to be a part of,” school Food Services Manager Leilani Hensley says. “From start to finish, it will give them a glimpse of what life is like, especially working in the food industry.”

Moreno is now enrolled at Sullivan. She says she aims to open her own restaurant, “and make sure everybody I see without food on their plate gets it, and they get the nourishment they deserve.”

Chadwick, competing in his last Junior Chef, plans to head to Sullivan and eventually become a master chef. “It’s the only career I feel passionate about,” he explains. “When I’m cooking, I feel fulfilled and excited for people to taste my food.”