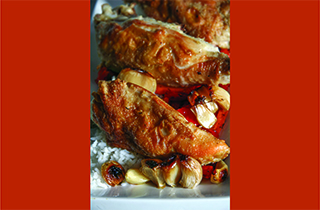 Tom Scanlan didn’t know more than 17 years ago when he bought his farm on a gravel road in Spencer County that the land would yield a crop unusual for many Kentucky farms. Originally from Chicago, Scanlan moved often during his lengthy U.S. Army career.

“Every time I moved I got a little more out in the country,” he says. These days, he’s in the last house on the road on the banks of the Salt River.

Five years ago he met Debra Green, a consultant, “recovering lawyer,” and urban dweller who thought his land might be put to use. “I thought, ‘What can we do that’s not going to take all of our time (but would) be fun and make a little money?'” says Green, a Salt River Electric co-op member. The two became close friends and both now work the farm.

She settled on garlic, about 20 or so hardneck varieties, a type she says is considered “more refined” by aficionados than the softneck varieties common in the supermarket. For cooks, hardneck garlic is much easier to handle. The cloves form around a stem, so they are easy to separate and peel, and are often larger than cloves on a softneck bulb. Hardneck varieties also grow well in cold weather.

Garlic harvest usually begins in May, says Green, who pops the plants from the soil with a garden fork, grabs the green leaves, and tugs the bulbs from the soil. The garlic hangs in a shed to dry and cure, which increases its storing capacity. August is the time to buy the garlic you can keep until winter and beyond.

You can buy Salt River Garlic Company’s garlic or get tips for growing your own garlic at www.saltrivergarlic.com, and also by searching their name on Facebook or Pinterest.

Combine flour, salt, and pepper and sprinkle over chicken. Heat olive oil in a deep, wide, heavy skillet over medium-high heat. Add chicken, skin side down, and brown. Flip the chicken and brown well, about 10 minutes. Cover the pan, reduce heat to low, and cook 15 to 20 minutes, or until cooked through (large pieces and dark meat take longer).

Remove to a platter. Pour off all but a tablespoon of oil in the pan. Add garlic and cook on high heat about 30 seconds, or until beginning to brown. Add broth and boil on high heat until it reduces to 1/4 cup, more or less. If using cream: add cream and allow it to boil 2 minutes to thicken. Spoon over chicken before serving. Serves 4.

It sounds like a strange combination, but it will change your life.

Combine all ingredients and chill an hour or so. Serves 6.