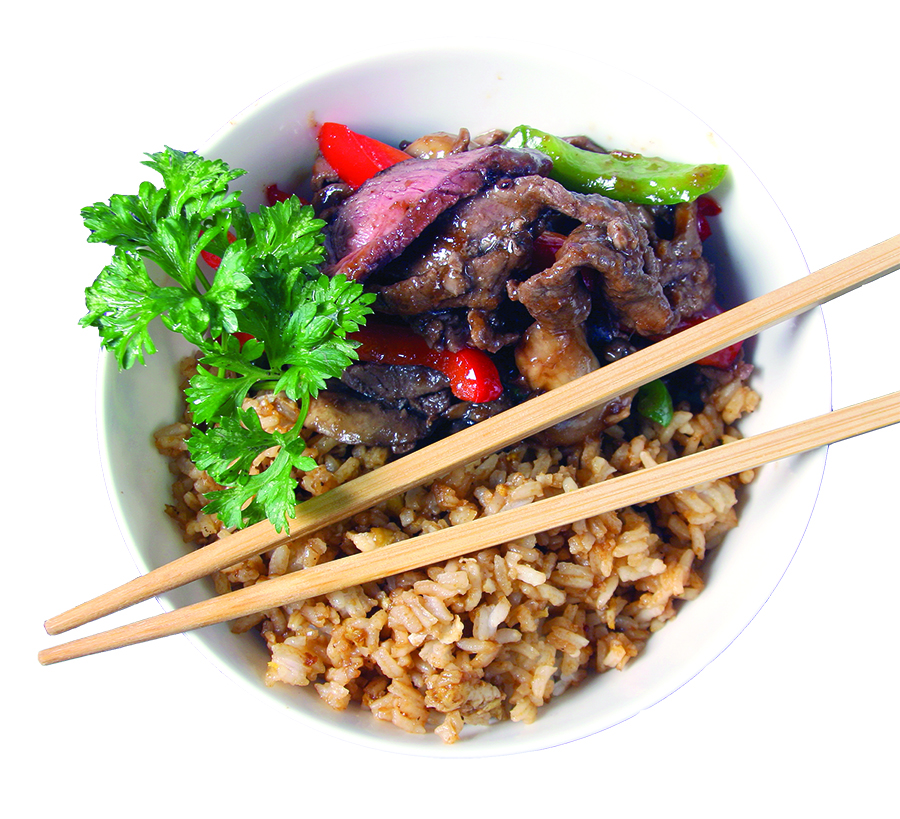 Lindsey Hinken grew up watching her grandmother, who loved to cook and was a good cook. While she didn’t take to cooking early, by high school she learned to love it and began to collect recipes. Now a junior at Western Kentucky University, Hinken says she cooks as much as she can, but the dorm doesn’t offer a lot of opportunity. “I get my cooking fix” during holidays and summers at home, she says.

The stuffed-pepper recipe earns Hinken a $2,000 scholarship in the Ready, Set, Sizzle! Beef Recipe Contest. The recipe is inspired by her interest in both good nutrition and fresh vegetables. “My dad has a big garden that he’s really into,” she says. He grows peppers, so that was a natural place to start. And the peppers, she says, are “a pretty simple recipe.”

Hinken’s interest in good nutrition mirrors her studies at WKU, where she is a biology major with a minor in nutrition. She’s also on the track team, running cross-country, and both indoor and outdoor track and field. When she’s home in northern Kentucky, Lindsey works at a specialty running store and tries to cook dinner for the family every night.

The contest was not the first competition co-sponsored by the Kentucky Beef Council and Kentucky Living magazine. Last year, a contest challenged contenders to send in videos of themselves cooking economical and delicious beef dishes.

This year, the recipes were judged on taste, appearance, ease, speed of preparation, and overall healthfulness.

Hinken’s Beef-Stuffed Rainbow Peppers recipe fills the bill. The peppers are made simple and healthy with instant brown rice in the stuffing, and by balancing meat with fresh vegetables.

While she has some academic and sports scholarships to attend Western, Hinken says she’s been looking for a way to study abroad and is hoping her beef-recipe prize money can help with that. She says she’s not sure what she’ll study if she goes abroad, but admits to looking at some cooking courses in Italy and France.

In addition to a student category, the Ready, Set, Sizzle! contest included an open category for home cooks.

Karlee Wilson, 17, of Bowling Green wins an electric grill valued at $500 for her easy and delicious entry, Sizzling Stir-Fry, that calls for packaged seasoning and teriyaki sauce to add pizazz to fresh vegetables and rice.

A senior at South Warren High School, Karlee took culinary classes the past three years and hopes to squeeze in one more semester. She first learned to cook at home with her mother and they brainstormed about what dish Karlee should enter for the contest. Karlee says, “I had made a similar stir-fry before, but I changed up the seasonings this time.”

The judges praised this recipe’s tasty layers of Asian ginger flavor with a hint of sweetness. You can easily make variations of this recipe by adding your favorite vegetables, such as bok choy, Brussels sprouts, carrots, or pea pods.

Preheat oven to 350°. Cut off tops of bell peppers. Discard tops, seeds, and membranes. Bring a large pot of water to a boil and submerge peppers for 3-5 minutes. Remove peppers, place them upside down to drain excess water, and allow to cool.

Meanwhile, heat olive oil and onion in a large skillet. Add ground sirloin, celery salt, and pepper and cook until meat is browned, stirring to break it up.

Cook rice according to package directions.

Combine browned beef, rice, soup mix, mustard, and about 1/2 cup of tomato sauce in large bowl. Mix well, but gently. Coat large casserole dish with cooking spray. Stuff peppers with beef mixture and place them upright in baking dish. Spoon remaining tomato sauce over the tops of peppers. Bake for 30 minutes. (If tomato sauce appears to be burning in the pan, add a little water.) If desired, top peppers with shredded cheese for the last 5 minutes. These peppers freeze well. Serves 4.

Heat vegetable oil in a wide, heavy skillet over high heat. When the oil is hot, add peppers and mushrooms and cook a minute without stirring. Stir often and allow vegetables to cook 2 more minutes. Remove them to a plate.

Add beef to skillet and spread to cover the bottom. When beef has browned (2 minutes or so) stir and cook through. Add vegetables back to the pan and add teriyaki sauce.

When the rice is cooked, crack the egg into it and scramble. Sprinkle seasoning over rice and stir to combine. Serve beef and vegetables over rice. Serves 4.