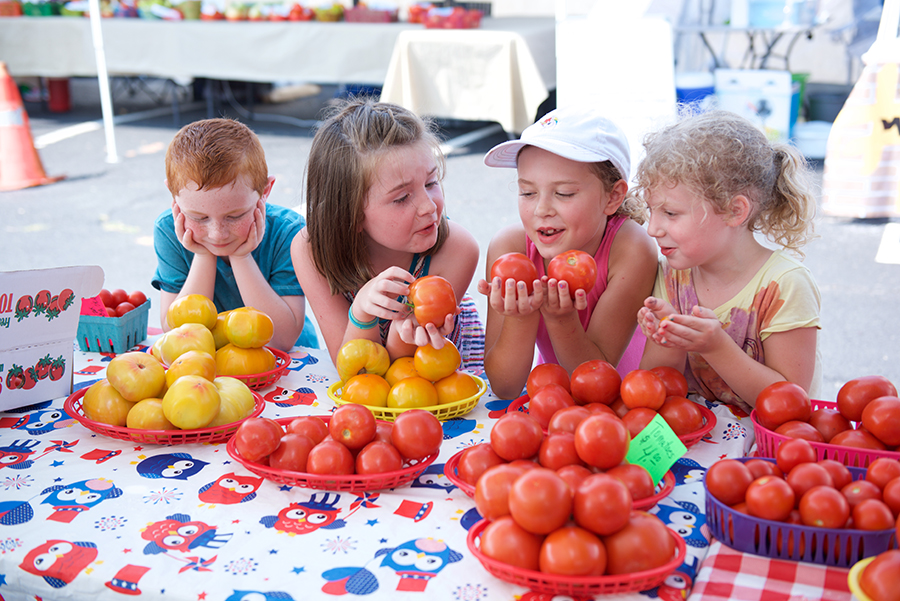 Nine-year-old Cole Blackaby digs into a piece of chocolate cake like he has never tasted such a treasure. He had just met the requirements of at least tasting every food item on his plate to earn the coveted dessert.

Cole didn’t know that the cake was partially made with zucchini. From the look on his face as he devoured every morsel, it didn’t matter.

Cole did know something about Hungry Kids Café, however.

“Free food,” he declares when asked his favorite thing about The Farmers’ Market on the Square, which hosts the café in Columbia, the seat of rural Adair County.

Café coordinators expect to serve more than 2,500 meals this summer, offered free every Saturday to all children and students, even college age, which is good news for students from Lindsey Wilson College. The main campus is within walking distance of the farmers market.

The vision of serving free breakfast and lunch to children came about three years ago when market coordinators noticed two little boys who frequented the market and sampled all the free food vendors made available. They wondered if the boys had food on other days when the market wasn’t open.

“We have so many kids who really rely on school meals during the year,” says Hungry Kids Café coordinator Lois Cunningham. “We would see these kids who would walk around and they couldn’t buy anything.”

Cunningham has been involved in the free meals program since its inception, but this will be her first year as coordinator. She says the program is not just about free food—it’s also about teaching young people that healthy food can be tasty, too.

“I love seeing their faces and getting hugs and hearing them say, ‘This is really good!’” Cunningham says. “That is the only thing important to me—the kids.”

Volunteers started out working with federal programs, but quickly learned they had their own ideas and began asking the local community to help fund the café. Now, the program relies completely on local donations.

This year, Hungry Kids Café—a new name for the program—went from a mobile trailer to a permanent building in the corner of a city parking lot where the market is held.

“I got enough donations to pay for the building,” Cunningham says. The city of Columbia gave approval for the location and ran the necessary utility lines for it to operate for the 2018 market season. “I’ve got so many people saying, ‘Can you use this?’ or, ‘Do you need that?’ I am getting donations from everyone,” Cunningham says.

While Hungry Kids Café is an important complement to The Farmers’ Market on the Square, the market itself is as much an entertainment destination as it is a place to find fresh food. It’s been compared by some with markets in large metropolitan areas because of its variety and atmosphere.

Seven-year-old Kasey Blue Kessler, who goes by KB, attends the market most weekends with his parents, Eddie and Tiffany Kessler.

“My favorite food at the market is homemade cinnamon bread,” KB says. He’s also learning a few things about where his food comes from, too: “I really like the farmer who sells the different color chicken eggs. He told me they turn out that way because chickens eat all kinds of bugs and plants around his farm.”

The market is the center of social gatherings during the summer, even for young marketgoers.

“It’s fun and I get to see my friends,” says 9-year-old Emma Burton.

“We give them each time to talk and it’s a chance for candidates to mingle with the community crowd,” Jones says.

Waffle Street, a vendor at the market, sells authentic Belgian Liège waffles made from a yeast dough ball with Belgian pearl sugar. The delectable waffle is a major topic of conversation around Columbia, especially on days like a recent Saturday when one person showed up and bought the entire inventory, leaving other patrons to wait until next time.

They were able to satisfy their taste buds, however, by stepping down a couple of booths and enjoying a wonderfully prepared rib-eye steak sandwich.

Vendors offer fresh produce as well as local meats and eggs. There are often local crafts, candles and an array of fun items to purchase. On one June weekend, Kids Nutrition Day promises something free for children at every booth. Youngsters make smoothies, paint pictures of fruit, and take home a plate that displays food portions and proper choices.

This is what Cole Blackaby’s older sister, Bella, likes best about the market.

“We get to do activities,” the 11-year-old says. Cole and Bella hope to spend every Saturday morning at the market during the summer with their grandparents, who operate Blackaby Hill Farm and sell meat and eggs. During the early marketing season, they sell bedding plants and then sell fresh produce when it’s ready.

The market was held on the public square, but moved last year just a short distance north on Campbellsville Street to a city parking lot that provides more space and easier access.

The market is open Saturdays from 8 a.m. until 1 p.m. and Wednesdays from noon until 5 p.m. on the corner of Campbellsville and Merchant streets next to the Judicial Center. The market participates in the federal Senior and WIC farmers’ market nutrition programs and offers its own “Kids Bucks,” where children are given $4 in Kids Bucks to purchase fruits or vegetables.

For more information on farmers markets across the state, visit www.kyagr.com/marketing/farmers-market.html. For more fresh produce and other foods, there may also be Kentucky Certified Roadside Farm Markets in your area. For more on roadside markets, visit www.kyfb.com/federation/markets.