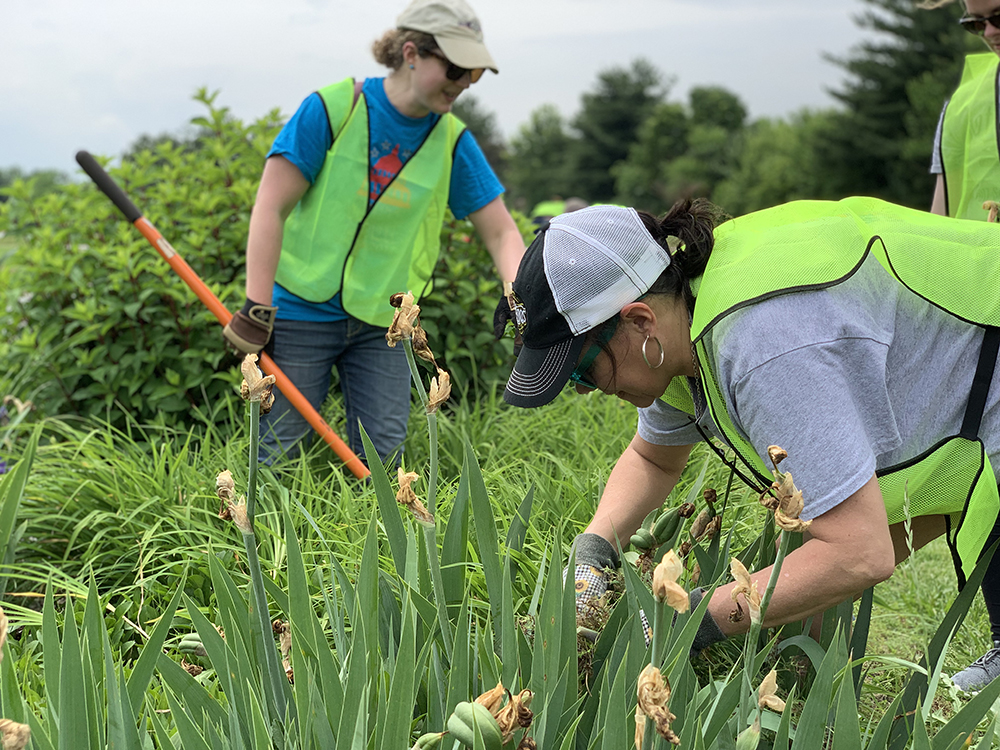 Congrats to West Kentucky RECC for winning the Beautify the Bluegrass Cooperative Award! Scroll down to the bottom to see their project.

Webster County’s project was a collaborative project between the Webster County Office of Community & Economic Development, the City of Sebree, Big Rivers Electric Cooperation and two generous citizens. Sebree resident and Webster County Industrial Development Authority Chairman Mark Moser donated his corner lot located in the downtown area to the city and Connie Skinner, a local nurse practitioner, allowed the side of her practice to be painted. The long-term plan is to turn the lot into a pocket park where visitors and residents alike can enjoy a picnic, snap a picture with the mural and enjoy our corner of the Bluegrass. The inspiration for the post card-themed mural came from our ongoing GrowWebCo initiative which promotes tourism and beautification (as well as leadership and local commerce) in Webster County. We believe Webster County is something to write home about and we hope you do, too.

Jackson Energy reached out to the Mount Vernon Kiwanis Club for project ideas and/or areas they would like to see beautified. From a list of four potential projects, Jackson Energy decided to work on two of them—with both projects entailing revitalization efforts to welcome signs at two of their city’s main entrances. Jackson Energy’s 23 volunteers worked alongside Vitalize Mount Vernon Director Lynn Tatum and employees of the City of Mount Vernon. The major project was the double-sided welcome sign that is strategically located at the intersection of Richmond Street and Hwy 461, as it is positioned at the gateway into their city limits. It rests in the through-way of I-75 and Hwy. 461 and is seen by an abundance of travelers as they make their way toward Lake Cumberland. This sign’s location warrants the first impression of a welcoming reception to its visitors and a neighborly greeting to its local residents. The City of Mount Vernon matched a donation given by Jackson Energy to fund this project. Old landscaping was uprooted and existing shrubs and trees were trimmed. Volunteers laid yards of landscaping fabric, added new decorative rock, shoveled a dump-truck load of mulch and planted dozens of colorful flowers, with the finishing touch of new flags flying high above. At the end of the day, the project was a tremendous success based not only on the beauty of
their welcome sign, but because Jackson Energy assisted the city in giving the residents of Mount Vernon something to which they can be proud.

The Clarks River National Wildlife Refuge is currently the only National Wildlife Refuge located solely in the Bluegrass State. However, there’s no visitors center on the north end of the refuge, only boundary signs. Countless people drive by the refuge each day, but many do not realize that it is theirs to enjoy. After speaking with management of the refuge, Jackson Purchase Energy (JPEC) learned that they could help by setting signs in two locations. They also noticed that the landscaping beds at the main office in Benton, Ky., could use some care, too. During the time leading up to their Beautify the Bluegrass event, the refuge ordered signs, JPEC gathered materials and asked for volunteers. The co-op had several employees volunteer, including 11 from JPEC and two from the refuge. JPEC invested five days from start to finish including planning, gathering material/constructing frames for the signs, setting signs, and cleaning landscaping beds at the Benton, Ky., office. The new signs will identify the area available for public access and help direct the community to more information about how they can enjoy the National Wildlife Refuge located in their backyard. JPEC and the refuge want the public to know they don’t have to travel far to enjoy the natural resources in this area.

For years the crack of bat meeting ball was the summer beat track for the small town of Kirksey, Ky. Families spent their summers at the park playing T-ball, Little League Baseball, and church league softball. Over the past few years, the teams left Kirksey for new facilities and the park became overgrown and rundown, a magnet for vandals. But now, the park has a new mission as the home of the Murray Rockets Special Olympics teams. Thanks to a makeover from West Kentucky Rural Electric Cooperative Corporation, Kirksey Ballpark is again a safe, welcoming place for families.

“When we learned that Special Olympics would be using the park, we wanted to help,” says West Kentucky RECC President & CEO David Smart. “We worked with Special Olympics to set priorities, then matched our resources with the work to be done. We also brought in two key partners to help, TVA and Swift Environmental.” TVA provided technical expertise and Swift Environmental supplied heavy equipment that made it possible to accomplish the work quickly and efficiently. After extensive planning, most of the actual cleanup and repair work were completed over a two-day period. About 30 West Kentucky RECC employees volunteered to help with the wide range of tasks. Fencing around the park’s old T-ball fields was cleared to make way for soccer and flag football. The fence around the softball field was repaired and topped with a bright yellow crown. Dugouts were renovated, the backstop was painted and 15 tons of old fencing, blocks and debris were hauled away. The entire park was mowed and trimmed. Finally, the field was dragged and readied for play.

“We are so extremely grateful to WKRECC for their unsolicited and quick response to our need. They have the resources and skills to help us make our dreams for this field a reality,” says Laura Miller, West Regional director for Special Olympics Kentucky. “Of course, we wanted a safe and routine location to practice, but these fields are going to provide much more,” Miller adds. “Our athletes will make this park a wonderful place for the community to enjoy, play and fellowship. This provides a way for Special Olympics to give back to all the generous people who support our programs both financially and with words of encouragement.”