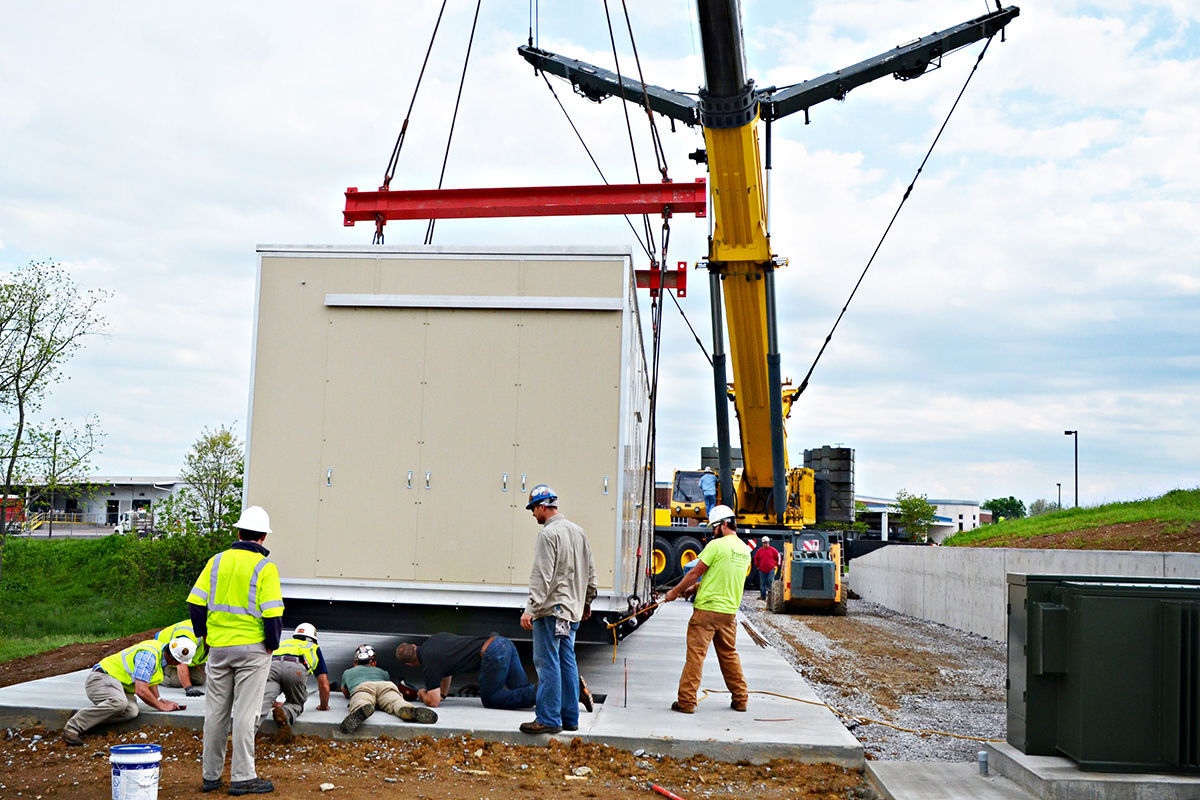 The issues involved in shifting to a new fuel source

Big changes are taking place throughout the United States in the mix of fuels used to generate your electricity. Last year, for the first time ever, coal dropped below natural gas as the most-used fuel during four months. During April, and then again in June, July, and August in 2015, natural gas came out on top. Coal was still the most-used fuel for all of last year—but this is about to change.

In photo above, contractors and Owen Electric staff set a natural gas generator to take advantage of the pipeline located outside their headquarters in Owenton. The $2.6 million project is expected to exceed $9 million in savings over 20 years. Photo: Whitney Prather Duvall

Lauren Khair, a regional economic analyst for the National Rural Electric Cooperative Association (NRECA), says, “The U.S. Energy Information Administration is projecting that in 2016 the use of natural gas will surpass coal on an annual basis for the first time.” The energy agency also predicts that natural gas will permanently surpass coal by 2030 as the most-used fuel to generate electricity.

For electric cooperatives, the top priorities during this transition period are the same as always—keeping service reliable and costs low for members. There are many challenges ahead.

Natural gas prices and supplies
Although coal is still the largest fuel source for co-ops throughout the nation, its share has fallen dramatically during the past 15 years. System-wide at the turn of the century, coal provided slightly more than 80 percent of the electricity generated by co-ops, and natural gas only 6 percent. By 2015, coal’s use dropped steeply to 65 percent and the use of natural gas jumped all the way up to 23 percent.

This is a very significant shift. There are two reasons for the change: fewer coal plants are running fewer hours, and more natural gas combined cycle (NGCC) power plants are running for more hours because recent low prices for that fuel make using it a better deal for co-op members.

Traditionally, the price of natural gas moved up and down a lot, swinging so widely and wildly it usually was not a good buy compared with the steadier, consistently low prices for coal. But as a new production method known as hydraulic fracturing (fracking) has increased the supply of natural gas, gas is now often the cheaper fuel.

But how long will the price of natural gas stay low? “I think we are bouncing along the bottom in terms of natural gas prices, and that will continue for the next few years,” says Don Mosier, executive vice president and chief operating officer at East Kentucky Power Cooperative (EKPC), which provides bulk power to 16 distribution co-ops supplying power to 530,000 homes and businesses in 87 counties.

Pipeline problems
But right now, the biggest problems to solve concern pipelines. The delivery service structures for natural gas were developed long before electric utilities needed to use the large quantities they’re buying today. As electric utilities increase their use of natural gas, some fundamental problems with the existing delivery system are becoming apparent.

The first issue involves keeping the lights on. The mission of the North American Electric Reliability Corporation (NERC), a not-for-profit international regulatory authority, is to assure that the bulk power system can provide steady electricity around the clock, all year long. In the past, NERC forecasts focused only on the infrastructure of the power grid itself, analyzing power plant and transmission line operations. NERC’s newest assessments now also consider what would happen to electric reliability if a natural gas pipeline stopped working.

Grid experts believe additional pipelines are needed to ensure there’s enough gas in the right places to keep the generators running and the lights on. Building new pipelines will increase costs.

The second issue is a technical problem with existing pipelines that involves the movement of proper quantities of natural gas. There’s a mismatch between the way orders for natural gas must be placed and the needs of electric utilities.

The problem, known as “gas-electric harmonization,” involves both the timing and pricing of natural gas deliveries. Power plant operators want more flexibility to buy what they need when they need it on a daily basis, and the gas industry wants firm contracts for fixed amounts of their product to be supplied on a regular schedule. Finding a workable solution seems likely to increase the price of natural gas.

Understanding the Pace of Change

The continuing role of fossil fuels

Commenting on anti-natural gas protestors’ demands earlier this year, U.S. Department of the Interior Secretary Sally Jewell said, “To say we can shift to 100 percent renewables is naive. We really have to have a blend over time and a transition over time that recognizes the real complexity of what we’re dealing with.”

Until there is a major technological breakthrough in developing better batteries and other energy storage systems, the portion of electricity that comes from wind and solar will remain limited.

Coal and natural gas will continue as the backbone of the power grid for decades because electricity from these power plants can be quickly and easily controlled by human beings. Power grid operators need the dependable kilowatts coming from coal and natural gas generators at any time of day or night to provide steady, reliable electric service.

Natural gas pipeline at Owen Electric’s front door
If there’s natural gas right outside your front door, why not use it to generate electricity? That’s exactly what one Kentucky electric cooperative is planning to do.

“Given the availability of a natural gas pipeline directly in front of our headquarters and the affordability of the fuel, it just makes sense to take advantage of the opportunity,” said Mark Stallons, president and CEO of Owen Electric Cooperative in Owenton.

On May 17, 2016, workers moved a 1,988-kilowatt generator into place. When it starts operating in June, it’s expected to provide supplemental power for the co-op’s nearly 60,000 members.

The project cost $2.6 million, but savings are expected to exceed $9 million over 20 years. It will also provide a revenue stream for the city of Owenton’s general fund.

“The city of Owenton receives 3 percent of the gross gas billing,” said Frank Downing, chairman of the Owen County Industrial Authority. “Any connection to the system from the gas line’s origin in Gallatin County improves the economic condition for the city of Owenton through its charge for gas sales.”

Under Owen Electric’s contract with East Kentucky Power Cooperative, its power supplier, the co-op is allowed to supplement a portion of its load with power from sources other than those provided by the Winchester-based G&amp;T.

“There is an interest among our 16 distribution co-op members in seeking alternative forms of generation,” says Nick Comer, East Kentucky Power’s External Affairs manager. “A clause in our standard agreement gives them the flexibility to utilize local resources, including renewable or fossil fuel generation.”
—Electric Co-op Today/NRECA