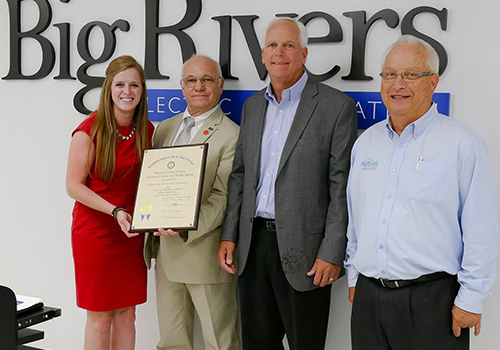 Employees completed over 1,250,639 production hours without a lost-time incident

“I want to congratulate Big Rivers Electric Corporation on earning their fourth Governor’s Safety and Health Award,” said Labor Secretary Derrick Ramsey. “Working over a million hours without experiencing a serious injury is a great accomplishment and this award deserves to be celebrated. On behalf of Governor Bevin and the Labor Cabinet, it is my honor to bestow this award to Big Rivers and its employees for their dedication to keeping workplace safety as a top priority.”

“Working safely is our first and foremost goal and the challenge is to not become complacent,” said Bob Berry, President and CEO of Big Rivers. “Receiving this award truly speaks to the heart of what our safety culture is all about – staying focused, paying attention and watching out for our coworkers.”

“Big Rivers Electric Corporation has set an incredible precedent for safety in the workplace over the years,” said Rep. Robby Mills (R-Henderson). “In fact, this is the fourth time they’ve received the Governor’s Safety and Health Award, and this time they have gone more than one year without a lost time injury or illness, which is an astonishing feat. Congratulations to everybody involved at Big Rivers Electric Corporation for this huge achievement, and a job incredibly well done.”

According to a recent report from the U.S. Bureau of Labor Statistics (BLS), Kentucky employers claimed the lowest incident rate for nonfatal occupational injuries and illnesses in the state’s history. Based on a mathematical calculation that describes the number of recordable incidents per 100 full-time employees, Kentucky’s rate improved from 3.8 in 2014 to 3.7 in 2015 – reflecting the most recent data available. This rate has steadily declined since it was first calculated in 1996, when a rate of 8.4 was reported.