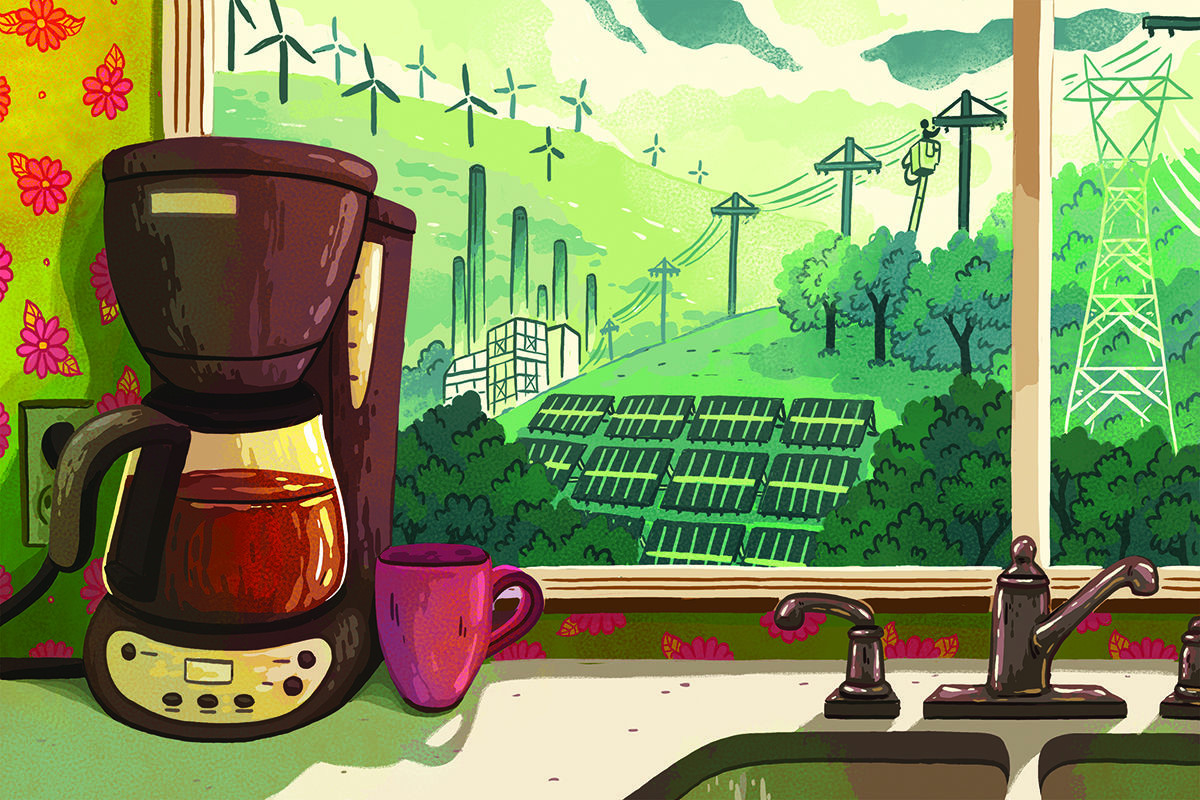 The difficulty facing utilities when they set the price for electricity can be summed up in one question: is it fair to everybody?

It’s always been complicated to figure exactly how many pennies and dollars will be needed to provide safe, reliable service. It’s a hugely complex matter. In states that regulate their utilities, like Kentucky, the government requires detailed explanations for how those charges are set. Now, with national energy policy ideas changing, interest in renewable energy resources increasing, and new environmental regulations piling up on top of old ones, getting the pennies right is becoming even more difficult.

Calculating who pays for what—and exactly how much to charge—isn’t just about the amount of electricity consumers use this month. The numbers you see on your electric bill also represent money spent years ago, and money that will need to be spent for decades to come to keep your service reliable.

Beyond the coffeepot
Think about what happens when you plug in your coffeepot. That small outlet inside your kitchen is your connection to an enormous outdoor system that extends for miles and miles. The electricity network includes distribution lines, transformers, poles, substations, transmission lines, support towers, and power plants. And that’s just the structures of the power grid—hundreds of people also work around the clock to keep it all in tip-top shape.

While those carefully trained people work to keep the power flowing safely and smoothly to you and thousands of other consumers, accountants are watching the flow of cash. Their job is a bit like managing a family budget, but on a much larger and longer time scale. And it involves a lot more money.

The cost to build a conventional power plant that uses coal or natural gas as the fuel to generate electricity is in the hundreds of millions of dollars. Utilities can’t pay for that up-front—they have to borrow money (somewhat like a mortgage on a home) to spread out the cost over the expected useful life of the power plant, which typically is 40 or 50 years.

Every day, week, and month, utilities also have to pay for the fuel. And they have to pay the wages of the workers who operate the system, perform maintenance on all the parts of the system, and make repairs after storms. Utilities also need to keep some extra cash on hand for emergencies.

Utilities add up all these known expenses, make estimates of how much electricity each group of consumers (household, commercial, industrial) will need during the coming months, then set the price for the electricity. The idea is that enough cash will flow in to provide the cash that must go out to keep service steady and smooth.

New ideas in energy mean new costs
But a lot of things can happen to throw a utility’s carefully calculated budget out the window—and cause changes to the numbers you see on your electric bill.

When the cost of a fuel is significantly higher or lower than predicted, utilities may be allowed to make a special temporary adjustment to the price of electricity during a particular month or season. But sometimes the changes in fuel prices are dramatic enough to require a complete recalculation of the basic price.

New laws can also affect a utility’s expected operating costs. Adding on modifications needed to comply with environmental rules at existing power plants is like a home improvement project—and may require borrowing additional money to complete the job. That changes the utility’s basic costs, and the price of electricity must be refigured higher to keep enough cash coming in to cover this added expense.

The methods used to make those kinds of changes have been in practice for decades and are well-understood. But those calculations are for gigantic centrally located power plants that produce electricity for hundreds of thousands of consumers. Adding small-scale renewable sources of electricity, such as rooftop solar panels, to the grid requires very different sets of math calculations. The cost to connect these widely scattered systems to the grid must be accounted for properly. Utilities and state regulators are fine-tuning the methods to keep it fair for all electricity consumers.

Calculating the cost of renewable energy
Sunshine is free—but the equipment to convert the sun’s energy into usable electricity costs money. That’s true for wind power and all other alternative sources of power. People who install such systems want to recover some of their costs by being paid for any surplus electricity they can feed into the power grid. But what should the price be?

An early compromise among lawmakers in many states has been to declare that the value of the electricity going into the grid from these mini systems is the same as the electricity flowing out from the utility. But that simple-sounding idea is not true—the costs of producing power in these different ways vary widely. And that has made the concept of so-called “net metering” one that can be controversial as all the costs are considered of adding a new piece to a large and intricate electric power system.

Connecting alternative power sources, like solar panels or wind turbines, to the power grid is more complicated than you might think. There are important safety features that must be part of the system, as well as paying for past and future investments in reliability, to make sure you have electricity when the wind doesn’t blow or the sun doesn’t shine. The statewide electric cooperative association in North Carolina created a short animated video that shows how the power flows—and what needs to happen in the case of outages so that utility company work crews’ lives are not in danger.

Connecting renewable energy to the power grid safely and economically
Connecting alternative power sources, like solar panels or wind turbines, to the power grid is more complicated than you might think. There are important safety features that must be part of the system. As well as paying for past and future investments in reliability, to make sure you have electricity when the wind doesn’t blow or the sun doesn’t shine. The statewide electric cooperative association in North Carolina created a short animated video that shows how the power flows—and what needs to happen in the case of outages so that utility company work crews’ lives are not in danger. Click to see the video: http://ncemcs.com/electricity/solar.htm