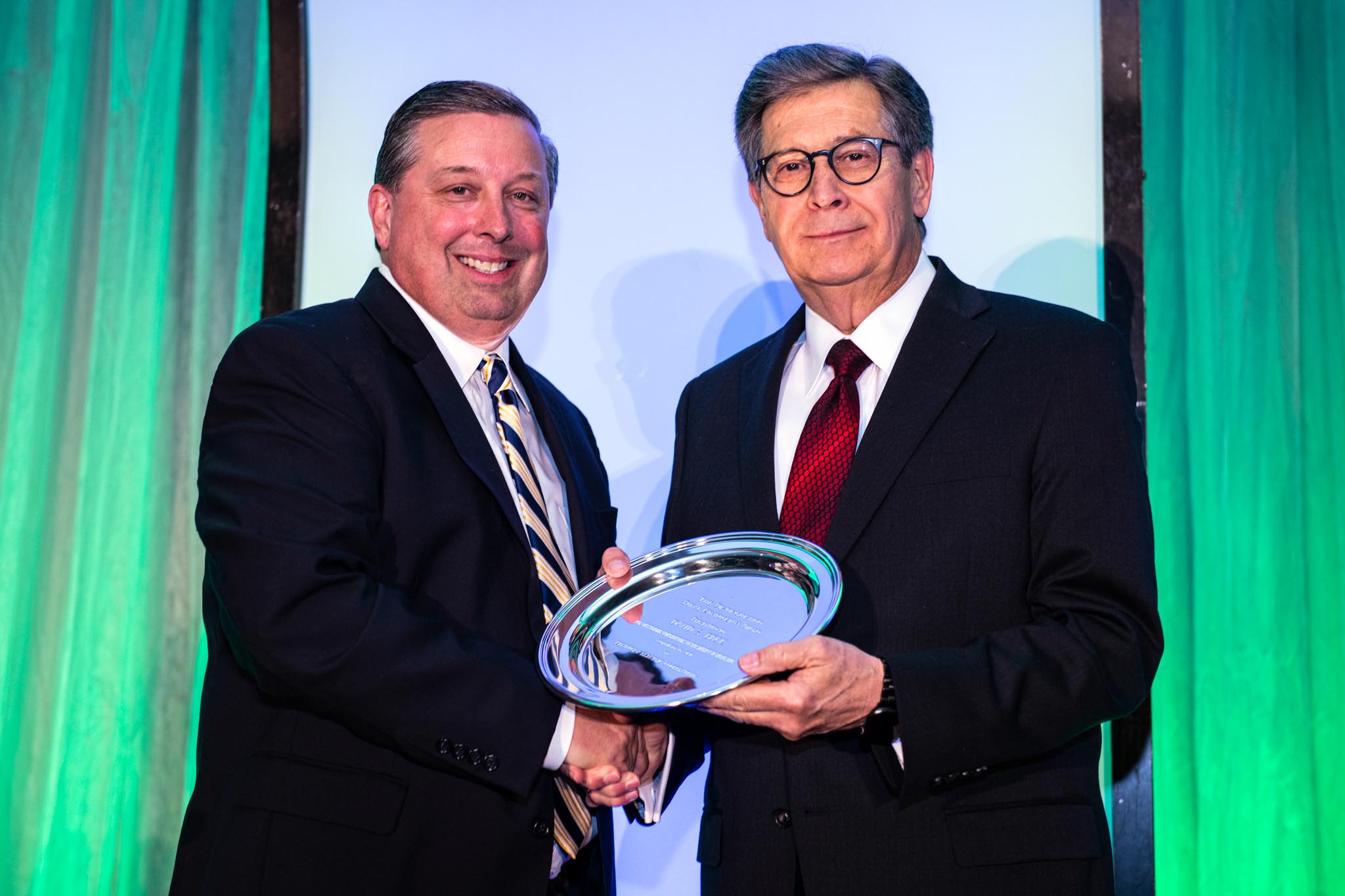 LONGTIME AGRICULTURE LEADER DAVID BECK, the president and CEO of Kentucky Venues and former head of the Kentucky Farm Bureau, was honored as the 2021 Distinguished Rural Kentuckian at Kentucky Electric Cooperatives’ 75th Annual Meeting in November. The award is the highest honor bestowed by Kentucky’s electric cooperatives.

“As a young boy growing up at the end of a gravel road, you never know where life is going to take you,” the Lyon County native told the banquet crowd, paying tribute to those who mentored him and gave him opportunities throughout his career. “True leadership is being able to cause people to believe in themselves and not just yourself.”

“David was always a class act,” says United States Senate Minority Leader Mitch McConnell, the 2019 Distinguished Rural Kentuckian. “He always had his facts together and you knew you were getting straight talk from him.”

In 1998, the two men championed the Tobacco Master Settlement Agreement, which led to the Kentucky Agricultural Development Board and Fund, changing the face of agriculture in Kentucky and helping many farm families remain on the farm.

Beck also played a key role in the passage of significant legislation in Frankfort, including bills securing low property tax rates and protecting farmers in grain elevator bankruptcy. He worked on the Kentucky Agriculture Water Quality Act, which has been used as model legislation in other states.

“David Beck’s dedication to improving the lives and livelihoods of Kentuckians echoes the mission of the commonwealth’s electric cooperatives and the purpose of this award,” says Chris Perry, president and CEO of Kentucky Electric Cooperatives. “David is a faithful ally of electric co-ops who have long appreciated his partnership and trust.”

Beck’s life story demonstrates the power of people and relationships. Elected as state officer of the FFA when he was a freshman at Murray State University, Beck made an impression on the veteran executive secretary of the Kentucky Farm Bureau, John Koon, who ultimately hired Beck to begin his Farm Bureau career.

“I loved to watch him work,” says Marshall Coyle, a former Kentucky Farm Bureau president. “I’ve watched his love for Kentucky agriculture, for rural Kentucky and how hard he has worked to keep moving rural Kentucky forward.”

Beck is a Distinguished Alumnus of Murray State, where Tony Brannon, dean of the Hutson School of Agriculture, says Beck has never forgotten his roots and the importance of supporting current students.

“He’s the real deal,” Brannon says. “Mr. Beck is a consummate professional. He’s meant so much to me and to our program through the years.”

“I have known him to be a consummate professional, a person who gets things done,” says Nancy Cox, dean of the University of Kentucky College of Agriculture, Food and Environment. “Mr. Beck has shown an amazing amount of dedication for Kentucky agriculture, promoting agriculture in a very public setting.”

After Beck’s retirement from the Kentucky Farm Bureau in 2018, he took the reins at the Kentucky State Fair Board, the governing body for Kentucky Venues, which manages the Kentucky Exposition Center and Kentucky International Convention Center in Louisville. He sees an opportunity there to help bridge the urban/rural divide.

“This is where Kentuckians come together,” Beck says, “Part of my mission, and I’ve shared it with my board, I want to bridge that gap.”

Beck and his wife, Nancy, were joined at the banquet by friends and family. The couple have three adult children and three granddaughters.

“I hope that besides the recognition—which I’m very appreciative—I hope (this) is an example,” Beck says. “From a selfish standpoint, I hope it’s an example for my children, my grandchildren, my colleagues, the people I work with.”