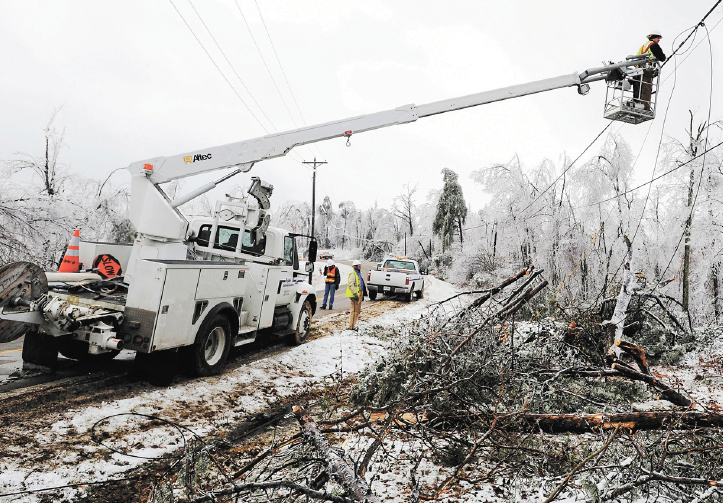 Even with the advanced technology and information available at our fingertips in 2020, all knowledge still has to start with the basics.

For centuries, educators have recognized the need to understand the fundamentals by starting with the three R’s: Reading, ’Riting and ’Rithmetic.

Kentucky’s electric cooperatives have their own three R’s to
communicate the fundamental value and values of Kentucky co-ops: Reliable, Resilient and Responsive.

Your power is on almost all the time and it’s been getting more reliable every year. For most people, the total amount of time without power (an outage) is less than two hours a year—that means their electricity is on 99.977169% of the time.

At each of Kentucky’s 26 electric cooperatives (download map below), reliability is no accident. It takes attention, dedication and a variety of measures to maintain reliable electric service.

As Kentucky Living profiles each month, co-op employees are committed to their community, in addition to providing safe, reliable and efficient service.

The resiliency of your co-op is due not only to proactive maintenance and investment on the local level, but also to their tie into the world’s largest “machine.” The National Academy of Engineering describes America’s electric grid as “the greatest engineering achievement of the 20th century.”

“It’s a system that has become so reliable, it’s understandable that some people take it for granted,” says Chris Perry, president and CEO of Kentucky Electric Cooperatives. “But, as the energy landscape changes in the 21st century, it is crucial we recognize that the value of the electric grid is found in on-demand reliability, even on the coldest and hottest days, when demand is at its peak.”

A resilient grid uses different types of generation—such as coal, natural gas, solar and hydro—to seamlessly work together to provide safe and reliable power. The system is designed and built to withstand high winds, powerful storms, cybersecurity threats and other disruptions that could result in outages.

When major outages do happen, electric cooperatives both from within Kentucky and from other states work together to help restore power.

Your local co-op is in the best position to respond to needs in its own home area because a cooperative—by its very nature—is uniquely suited to understand its own community. Co-ops are built by, belong to and are led by people in their own local communities.

That means local control with the interests of your local communities in mind. When you have questions about energy in your home, business or house of worship, your local co-op is your trusted energy adviser.

With new technology, problems in the grid are much easier to prevent early on, easier to identify and easier to fix. The smart grid also helps utilities plan for the future to reduce the likelihood of power blackouts and surges.

For the consumer-members served by Kentucky co-ops, benefits of this improved technology include more access to information and new ways to view, control and manage their energy use.

Who sets the rates?

Understandably, one of the most common questions asked about any electric service is, “Who sets the rates?”

Twenty-one electric co-ops are regulated by the Kentucky Public Service Commission (PSC), which is responsible for fostering the provision of safe and reliable service by setting fair, just and reasonable rates. The Tennessee Valley Authority oversees five Kentucky co-ops.

Did you know that Kentucky has the seventh lowest electric rates in the nation? Keeping electric rates affordable does not just happen. It takes careful planning and the insight of experts with years of knowledge in technology and energy management.

Co-ops work together and with economic development officials to promote our local communities as great places to live and locate business.

With competitive electric rates, a robust power grid, a dedicated workforce and an attractive quality of life, Kentucky co-op territory is open for business.

Kentucky’s electric cooperatives are home to a wide variety of businesses. Co-ops work with employers to find the best fit for their operations, using tax incentives and maximizing Kentucky’s central location and transportation infrastructure.

All 26 Kentucky co-ops belong to Kentucky Electric Cooperatives, the statewide association that publishes this magazine. Membership gives the co-ops the opportunity to share information and practical advice among themselves. By pooling their resources, co-ops encourage innovation and high standards in every facet of their business, including safety training, disaster response, communications and technical knowledge.

This cooperation among Kentucky co-ops is also demonstrated in the annual co-op Frankfort and Washington youth tours.

Kentucky Electric Cooperatives speaks on behalf of co-ops to provide information to elected officials in Congress, the state legislature, the governor’s office, and federal and state agencies, including the PSC. This advocacy alerts and educates leaders so they know how government policies affect your bills and the ability of co-ops to effectively serve you.

“Just as local consumer-members depend on their co-op for reliable service, we are proud to be a source of reliable information for government officials,” says Chase Crigler, community and government affairs director at Kentucky Electric Cooperatives. “It’s important for members of the General Assembly to know that the local consumer-members of Kentucky co-ops are also voters who stand up for their co-op.”

In the center of this month’s issue of Kentucky Living is a special pullout, the 2020 Legislative Guide, which lists Kentucky’s elected leaders and shows which members of Kentucky’s General Assembly represent which co-op service territories.

“Your local co-op remains the most important co-op,” Perry says, “but there is strength in numbers, and Kentucky co-ops work together to protect and advocate for local consumer-members. It’s the cooperative way.”