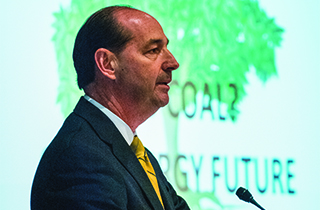 Kentucky's House Majority Leader Representative Rocky Adkins, a featured speaker during the 2013 Kentucky Association of Electric Cooperatives annual meeting, says, "We are at a critical crossroads. People are using more energy than ever before and demand for electricity will continue to grow." Rep. Adkins believes that with improved technologies, coal can continue to produce reliable, affordable electricity throughout the coming decades. Photo: Tim Webb

Kentucky’s House Majority Leader Rocky Adkins works behind the scenes to create innovative energy policies, and speaks passionately and often about the importance of coal

When I go to energy conferences and spot state Representative Rocky Adkins’ name on the list of speakers, I draw a big circle around it and make plans to listen. First elected in 1986 to serve in Kentucky’s House of Representatives from the 99th District (Elliott, Lawrence, Boyd, and Rowan counties), Rep. Adkins became House Majority Leader in 2003.

He’s a strong advocate for coal, and his work in Frankfort is helping shape many parts of Kentucky’s energy future. But changing the ways we produce and use energy is not an overnight task. It takes years.

In July, our schedules landed both of us in Lexington on a Friday afternoon. We met for conversation instead of speeches, and covered a lot of topics. Here are highlights from our chat.

Rep. Adkins says, “Here in Kentucky, we’ve worked with people concerned about the natural environment, with business leaders, people in the academic world, researchers—we’ve asked everyone to help us develop energy policies that will work.”

By 2007, Rep. Adkins had gathered broad enough bipartisan support in the state legislature to pass House Bill 1 (signed by then Governor Fletcher), and then followed that up with House Bill 2 (signed by Governor Beshear) in 2008. These laws provide the framework to bring new energy ideas to life, as well as encouraging energy efficiency, and training workers in the new skills needed for the energy jobs of the future.

Remembering the give-and-take needed to craft those pieces of legislation, Rep. Adkins says, “Designing and passing HB1 and HB2 was an educational process. It gave us the chance to talk about the possibilities we have in Kentucky to become a national leader, even an international leader, in energy.

“One of the areas I concentrated on was the opportunity for research and development to bring forward new energy technologies right here in our state,” Rep. Adkins says. HB1 set up major funding for the University of Kentucky’s Center for Applied Energy Research (UK-CAER), and annual funding continues. Rep. Adkins says, “CAER now does some of the most advanced research in both coal gasification and in carbon capture to try to get those technologies for coal power plants to the point where they are actually usable at the commercial level.”

HB2 followed up with early financial support for research at the University of Louisville, a program that is now known as the Conn Center for Renewable Energy. Rep. Adkins has also played a major role in providing funding to other energy research and development programs at Western Kentucky University and Eastern Kentucky University. State funding programs like these typically become the seed money for projects that then gather additional financial support from national government agencies and independent businesses.

Bringing research money into the state to pay the salaries of scientists, technicians, and other workers is only part of the picture. Rep. Adkins sees a much larger connection between new energy ideas and the state’s economic growth. Rep. Adkins says, “We’ve also passed the most aggressive legislation in the country to try to attract energy companies to come to Kentucky to build these things because that would bring thousands of jobs to the state. These incentives are part of the long-range picture.”

Speaking up for coal

Turning to the differences between encouraging new energy ideas in a coal state to the energy policy ideas coming from Washington, D.C., Rep. Adkins says, “I think the positives for coal far outweigh the negatives, from the standpoint of our economy, low-cost energy, and good jobs. In Kentucky we produce over 90 percent of our electricity from coal. That low-cost energy has been a valuable tool for us to use in retaining jobs, and in recruiting jobs to Kentucky. The reason those industrial manufacturing jobs have located here is because of our reliable and affordable, low-cost energy from coal.”

Over the years, Rep. Adkins has often criticized the national coal industry for not speaking up more forcefully about the value of coal-based electricity to the national economy. Rep. Adkins says, “In my 27 years of serving in the Kentucky House, there have been a lot of changes in the coal industry. In this country, coal has a good story to tell. We have reduced regulated emissions by more than 80 percent.”

That story did not happen overnight. Rep. Adkins notes that the Clean Air Act of 1970 gave time for new technologies for coal to be developed. And the costs to add them were spread out gradually over time.

Rep. Adkins says, “In Kentucky and in the United States, we care about the environment, but that has to be balanced with a strong economy. Without a strong economy it’s hard to have a good environment. When new regulations are brought forward, they need to be done in a responsible way with a lot of common sense so that we don’t disrupt the cost of energy. Regulations that lead to higher electricity prices could have a devastating impact on the economy and a devastating impact on jobs.”