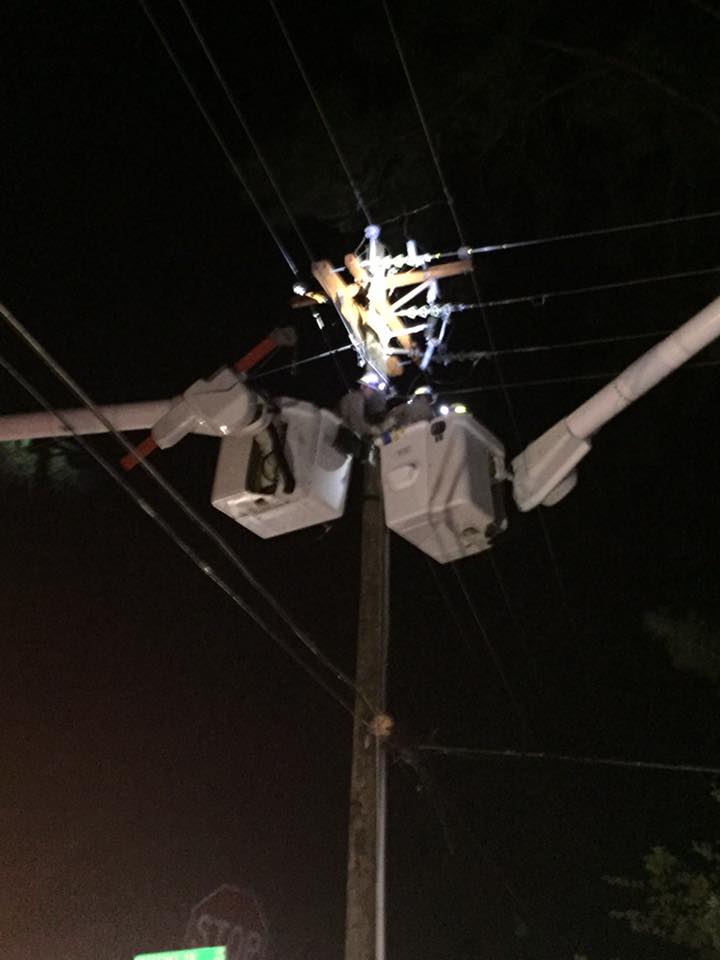 Owen Electric linemen change out a pole. The crew is assisting Coastal EMC in Georgia.

LOUISVILLE (Sept. 11, 2017) – In one of the largest mutual aid deployments in Kentucky history, more than 100 linemen and other crews from 11 Kentucky electric cooperatives are now deployed to Georgia after hurricane-force winds toppled trees onto power lines, causing numerous power outages.

As of 6pm Monday, September 11, Hurricane Irma’s strong winds and heavy rain has knocked out power to more than 504,000 co-op members in Georgia.

Through careful coordination with co-op officials in the region, including the Kentucky Association of Electric Cooperatives, 103 linemen from electric cooperatives across Kentucky are assigned to individual Georgia co-ops who have requested their assistance. Additional Kentucky co-ops have also volunteered to send crews and are awaiting assignment.

Last year, KAEC coordinated the deployment of 143 linemen for Hurricane Matthew recovery, the most ever. In 2005, 120 Kentucky co-op linemen responded to Hurricanes Katrina and Rita.

The top priority of each local Kentucky co-op is service to its own member-owners. Before committing resources to mutual aid requests, each co-op ensures it has ample crews available for all local needs, including routine maintenance and emergencies. In addition, Kentucky co-ops are closely monitoring the projected path of Hurricane Irma to assess whether it will affect co-op territory, here.

Jackson Energy in McKee, Kentucky has deployed 13 employees to Georgia to assist in power restoration after Hurricane Irma. 12 linemen and a mechanic are helping Coweta-Fayette EMC.

West Kentucky RECC crews in Mayfield and crews from Cumberland Valley Electric, based in Gray are helping Planters EMC members in a seven-county territory in southeastern Georgia.

Three crews each from Owen Electric and South Kentucky RECC are assisting Coastal Electric Cooperative which serves roughly 573 square miles with 1,491 miles of line in three counties on the Atlantic Coast.

Three crews from Nolin Rural Electric Cooperative, based in Elizabethtown, are deployed to Excelsior EMC, which serves eight counties in southeast Georgia.

Every co-op has an emergency plan, and part of that planning includes what is both a unique and an effective approach to emergency management and disaster recovery: mutual assistance. When disaster strikes, co-ops quickly deploy support staff and equipment to emergency and recovery zones to help sister co-ops restore power.