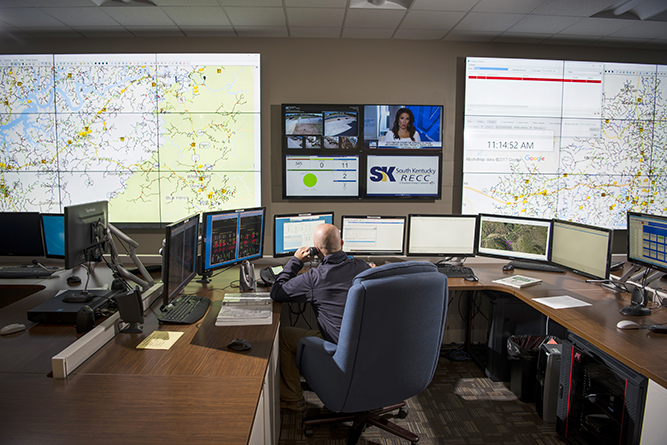 South Kentucky RECC dispatcher Ben Burton uses the outage management system (OMS) to pinpoint an outage. Dependent on the number of calls received and where the calls originate, the Trimble OMS can predict the extent of an outage, including how large it is, and what area it possibly covers. The OMS can also show vehicle locations. Photo: Tim Webb

Predicting the future is the stuff of science fiction movies. However, sci-fi often finds its way into our everyday lives. Researchers and the nation’s utilities have been working on a variety of systems to predict where on the utility system an outage could occur.
Power outages are inconvenient to most and costly to many. Outages can happen for many reasons. A careless driver can run into a pole. A strong storm can push a tree into the lines. An unlucky squirrel can find himself in the wrong place at the wrong time.

However, many outages are a result of aging infrastructure. The amount of equipment on a typical distribution line is immense. Electric cooperatives maintain hundreds of miles of distribution lines that must be patrolled and inspected. This is often a time-consuming and labor-intensive process. But what if there was a better way?

America’s electric cooperatives are working with a variety of the nation’s leading universities and technology vendors to test different systems that can predict when and where an outage will occur before co-op members experience the outage.

These systems typically work by recording a disturbance in the system. These disturbances are short-lived and appear as waveforms. They can be compared to the device that records the human heart. Each waveform has a unique characteristic, similar to a fingerprint. For example, a tree branch rubbing against a distribution line looks different than a cracked or damaged piece of equipment.

However, figuring out where on the system the issues are happening and how critical the issue is has been a challenge. Co-ops are testing systems developed by universities and major corporations to help solve the problem. In the fall of 2017, a group of electric co-ops will embark on a test of a new system developed by one of the world’s leading engineering companies to help improve reliability and lower costs.

Universities and vendors often come to electric cooperatives to test new products because of the nimbleness of co-ops and their unrelenting commitment to improving the lives of those they serve.

As these technologies advance, predicting the future, or at least future power outages, may not seem so far-fetched.