When looking for a permanent spot for a settlement along the Kentucky frontier in the 18th century, Squire Boone selected a site in present-day Shelby County. He built a fort along the banks of Clear Creek in 1779/1780, amidst the ongoing turmoil of the Revolutionary War. Many families came to Painted Stone Station during the short time it was a haven from the increasingly hostile actions of Native Americans. Eventually they were driven to evacuate on a fateful day in September 1781, walking into a massacre that killed several settlers. The ones who managed to escape left behind a legacy through their descendants, thus keeping alive a very precious part of Kentucky’s early history from 241 years ago.

It is the story of the brave souls that settled Painted Stone Station that will be told through an annual living history event on September 10 in Shelby County, Ky. Hosted by the Painted Stone Settlers, Inc., a group of living history re-enactors, this story is preserved through a dramatic re-enactment known as The Long Run Massacre & Floyd’s Defeat. It retells the story of Painted Stone Station and the real people who lived there. This entire event is meant to portray history as it actually happened in the social and cultural context of 1781, while the Revolutionary War was still being fought. The original story script was taken from historian Vince Akers who researched it thoroughly and is also a descendant of the Low Dutch Colony that settled in Henry County, KY.

Included in the Saturday event are various demonstrations of heritage skills such as weaving, fire starting, customs of the 18th century and blacksmithing. Militia life and a Native American campsite are also depicted. Visitors can experience an 18th century cannon demonstration, get a taste of militia life and engage in lively conversation with Patriots and Loyalists. The main re-enactment (battle between settlers and Natives) will be at 2 p.m. on Saturday, Sept. 10. The SAR (Sons of the American Revolution) always provide a special American flag ceremony prior to the battle re-enactment. As an added bonus, members of the Shelby County Historical Society will have a booth set up displaying historical artifacts and inform the public about their mission to preserve local history.

This year’s re-enactment is dedicated to those re-enactors we have lost who have been part of the retelling of Painted Stone Station over the years. Re-enactors are known for researching and meticulously recreating the 18th century; these individuals were no different. They were a talented group of individuals who left behind photos, drawings and unique handcrafted items, which will be on display to showcase their love for history. A special time has been set aside on Saturday evening for re-enactors and their guests to celebrate the lives of those we lost. To add to the tribute, special music will follow.

Organized in 1999, the Painted Stone Settler’s Inc’s mission is to collect, preserve and present the history of the Commonwealth of Kentucky. Through a variety of outlets such as classroom visits, participation in local and regional living history events and their own annual event in Shelby County, The Long Run Massacre & Floyd’s Defeat, the non-profit organization strives to bring history to life for children and adults in a fun, hands-on learning experience.

A special School Day will be held on Friday, September 9 for area school children and homeschool groups only (no public allowed). This hands-on event is a day full of special demonstrations great for teaching the lifestyle of the 18th century. Space is limited. For more information call/text (502) 487-0379 or email helenmckinney1969@gmail.com. A special discounted rate of $4 per person is charged for School Day and for Boy/Girl Scout troops who attend on Sat. morning between 10 – 11 a.m. 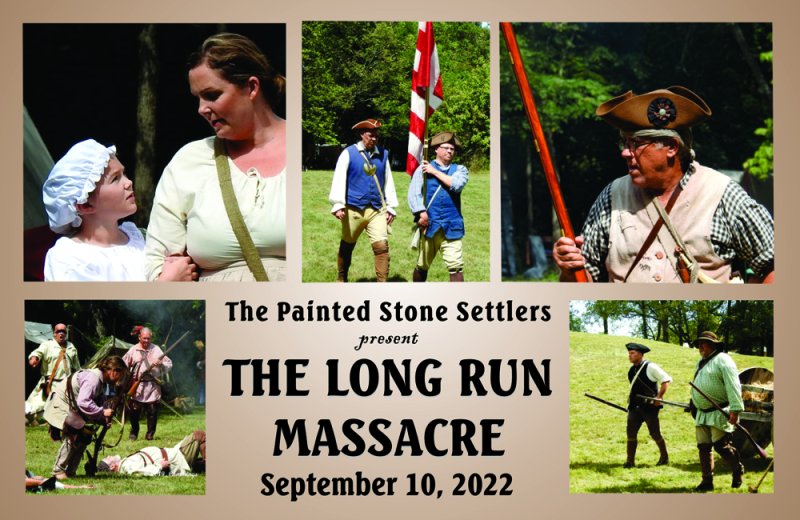