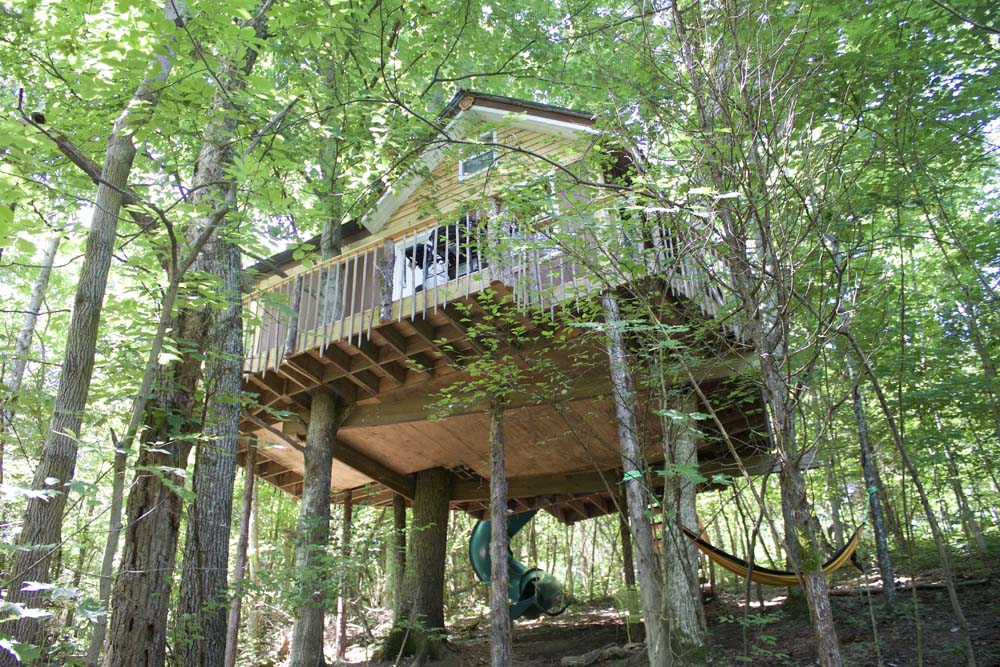 Think about climbing to the top of a tree and floating from limb to limb as if gravity did not exist. That’s the way I describe my experience with Earthjoy Tree Adventures in Bracken County a few years back. You can swing, dangle or sit on a limb high atop a tree with the safety of ropes and harnesses.

But owners Bill and Shelly Byrne wanted to expand and offer folks another kind of tree adventure. They met Pete Nelson at one of his treehouse workshops. Five years later, Nelson, also the host and producer of Animal Planet’s TV series, Treehouse Masters, agreed to help them design and build a one-of-a-kind treehouse to be featured on his show.

In early 2014, Nelson traveled to Shelly’s family farm near Germantown to scout a location for a treehouse. One more scouting trip later, he found the perfect hardwood trees to begin construction. The project was finished in December. “It was like a Christmas present,” Shelly says.

The Byrnes named it the Pete Nelson Treehouse—and it looks like it was made for a national television series, with two stories, a master bedroom with a king size bed, open floor plan, large living area, wood stove, vaulted ceiling and barn doors that open up to a deck and magnificent views.

A second treehouse, named the Aliyah, was finished in 2016. It’s actually two houses connected by a swinging bridge. The third treehouse, the Old Hickory, was finished in 2018. The second and third houses, although not as large as the Pete Nelson, offer three beds each to accommodate families. “And the views from all of the treehouses are spectacular,” says Bill Byrne.

The Byrnes are part of a national trend called “glamping,” a type of camping that involves more luxurious amenities and accommodations than roughing it in a tent.

And the Byrnes didn’t end their tree climbing business. You can still glide through the trees on the 200-acre family farm. Visitors can even take an advanced tree-climbing course that involves three levels of training: Level one teaches students to independently access a tree. Level two teaches movement in the canopy and tree traverses. Finally, level three teaches rescue/facilitation.

Aside from treehouses and climbing adventures, visitors can go fishing or hiking along streambeds and through forest and field—or even relax in a cabana or hammock. Also, and not surprisingly, the farm and treehouses have become popular for weddings and family reunions.

With outdoors lovers in mind, the Byrnes have created a place that will soothe your soul or give you an adrenaline rush. And as the couple says, “It’s a place where people can begin to listen to themselves again.”