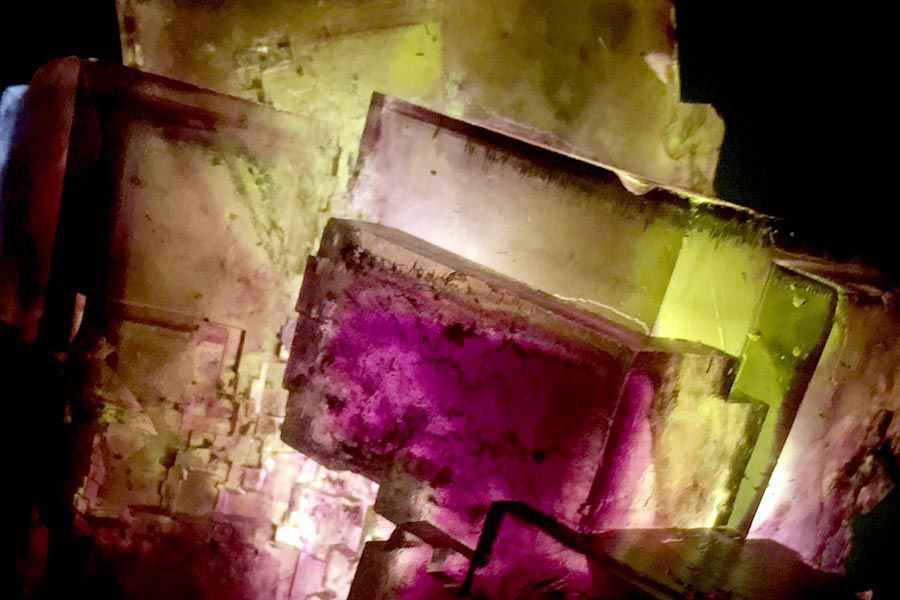 This is an example of a fluorite specimen the size of a dinner plate at the Ben E. Clement Mineral Museum. Photo: Nancy Clement

Vanderbilt University graduate and science teacher Ben E. Clement leased the Holly Mine property in Crittenden County in 1919 in the heart of the fluorspar mining district, beginning his career as an entrepreneur and mine operator.

Industrial fluorspar is used in the manufacturing of products that include steel, aluminum, and glass—materials considered vital to the economy and national security. Ben was proud to be a part of the building of America; however, something else came from the Holly Mine that would make the Clement name known the world over.

Ben found a crystalline specimen of fluorspar, also known as fluorite. Amazed by the beauty and color of the hexagonal crystals, he soon became instrumental in the salvage and preservation of thousands of exquisite examples of fluorite from the many fluorspar mines in western Kentucky and southern Illinois. These stunningly beautiful pieces would have otherwise been crushed along with the ore.

Ben’s personal collection contained specimens weighing up to several hundred pounds, with crystals of vibrant purple, blue, green, and yellow hues. To this day, it is thought to be the world’s largest and finest collection of fluorite—and it captured the attention of the world as well. Ben’s son Ed says, “When I was a boy, it was nothing for us to come home from church and find people from some other country waiting in the yard to see the collection.”

Upon Ben’s passing in 1980, his heirs set out to establish a museum, something their father had always envisioned. Today, the Ben E. Clement Mineral Museum in the small town of Marion houses this world-class collection of fluorite, mining artifacts, historical documents, and photographs. The museum also exhibits what is believed to be the world’s finest collection of fluorescent minerals, which produce brilliant colors when exposed to ultraviolet light.

Visitors to the museum and gift shop are routinely astounded with what they see, but for rock collectors and outdoor enthusiasts there’s even more. The museum offers public mineral digs at the historic fluorspar mine sites. Bring a rock hammer and a 5-gallon bucket and for a small fee you can take home what you find. Night digs are also available at the Columbia Mine, where you can uncover dazzling fluorescents with the aid of black lights provided by the museum.

As an outdoorsman, mineral collector, and history and science lover, the one place in Kentucky that satisfies that combination of passions is the Clement Mineral Museum, which is why I go back time and time again with my boots, bucket, hammer, and high hopes.

Insider tips
The Ben E. Clement Mineral Museum is open year-round, except for major holidays and December 24-January 1. Group tours and classroom activities are also available. The museum hosts an annual gem, mineral, and fossil show the first weekend of every June. For detailed information on hours of operation, pricing, and activities go to www.clementmineralmuseum.org or call (270) 965-4263.