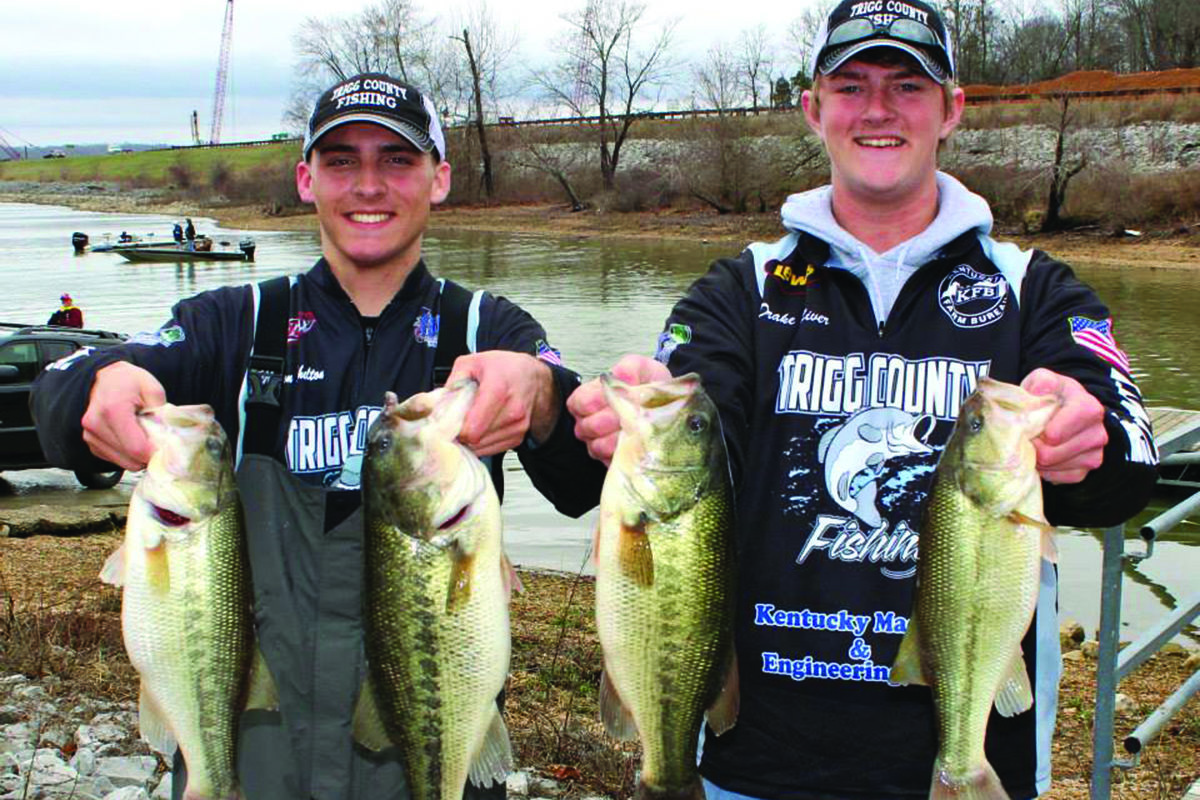 FRANKFORT (March 30, 2017)—Now that the Kentucky-based teams are no longer in the NCAA basketball tournament, the Final Four isn’t nearly as exciting, and somewhat depressing, to watch.

The best cure for any bruised feelings left by March Madness is to get out in early April and chase largemouth bass. A huge largemouth bass shaking its head vigorously trying to throw your white spinnerbait soothes any broken basketball heart.

Water temperatures range from 52 degrees at Lake Cumberland in the east to 58 degrees on Kentucky Lake in the west. In other words, it is prime time.

“With water temperatures in the mid-50s, the big female largemouth bass are staging,” said Jeff Ross, assistant director of Fisheries for the Kentucky Department of Fish and Wildlife Resources. “They are moving from their deeper winter locations to spawning locations in the shallows. They definitely work their way shallow in stages, but a cold front can push them back for a short period.”

At this time of year, the male largemouth bass move shallow first to build nests, followed by the female bass to lay their eggs.

“Recently, I caught a lot of largemouth bass, but they were all small male bass,” said Easton Copley, aquatic education program coordinator for Kentucky Fish and Wildlife. “When you look at their lips, they were roughed up and bloodied. They looked like they had lipstick on them from making spawning beds.”

“At this time of year, I am not looking for numbers of bass,” Copley explained. “I am fishing for big females.”

Ross said to hit the secondary points or ledges near shallow water on the larger reservoirs, such as Kentucky Lake or Barren River Lake. “When the females hit those secondary points in spring, they are pretty close to spawning,” he said.

Copley said when water temperatures climb to 60 degrees, the larger female bass move into their shallow water spawning areas. “I look for rocky banks and transitional banks from rocky to mud,” he said. “If you can find a laydown tree on this kind of bank, all the better.”

Copley throws a variety of lures when spawning bass are up shallow. “I’ve caught a lot of bass on a square-billed crankbait in the Sexy Shad color,” he said. “I also catch quite a few on jigs. Black and blue is my go-to jig color for lakes with some color to the water. In clear water, I like the Cumberland Craw color for my jigs at this time of year.”

“When the bite gets tough, I pull out a Shakey head with a black and blue 7-inch straight-tailed worm,” Copley said.

Anglers who plan to release their catch need to release the female largemouth bass back to the same area during the spawn. “Take a photo and get them back in the water as soon as possible so they can get back to their spawning,” Copley said. “They are full of eggs.”

Kentucky anglers have oodles of options to catch spring largemouth bass. Check the 2017 Fishing Forecast for productive largemouth bass lakes near you.

Copley’s favorite lake is south-central Kentucky’s Green River Lake. He also likes 784-acre Cedar Creek Lake in Lincoln County. “Guist Creek Lake near Shelbyville has lots of big fish, but can be tough to fish because of high fishing pressure,” he said.

Kentucky Lake and Lake Barkley ranked number 4 in the Southeast Region for 2016 on Bassmaster Magazine’s Best Bass Lakes in the Country rankings. These lakes offer arguably the best chance in Kentucky to catch largemouth bass 4 pounds and larger.

“We have many lakes where you don’t need a 20-foot bass boat to catch a big bass,” Ross explained. “Our smaller state-owned lakes, such as Kincaid Lake in northern Kentucky and Lake Malone in western Kentucky, are trophy largemouth bass lakes. Both of these lakes have excellent facilities for anglers at Lake Malone State Park and Kincaid Lake State Park. Beshear Lake, mainly located inside Pennyrile State Forest in western Kentucky, is always a big bass producer. Cranks Creek Lake in southeastern Kentucky also has some huge bass in it.”

The Final Four may be a bummer for Kentuckians this year, but warm days and trophy largemouth bass will put the NCAA tournament in the rearview mirror.

Remember to buy your 2017-2018 fishing license if you haven’t already.