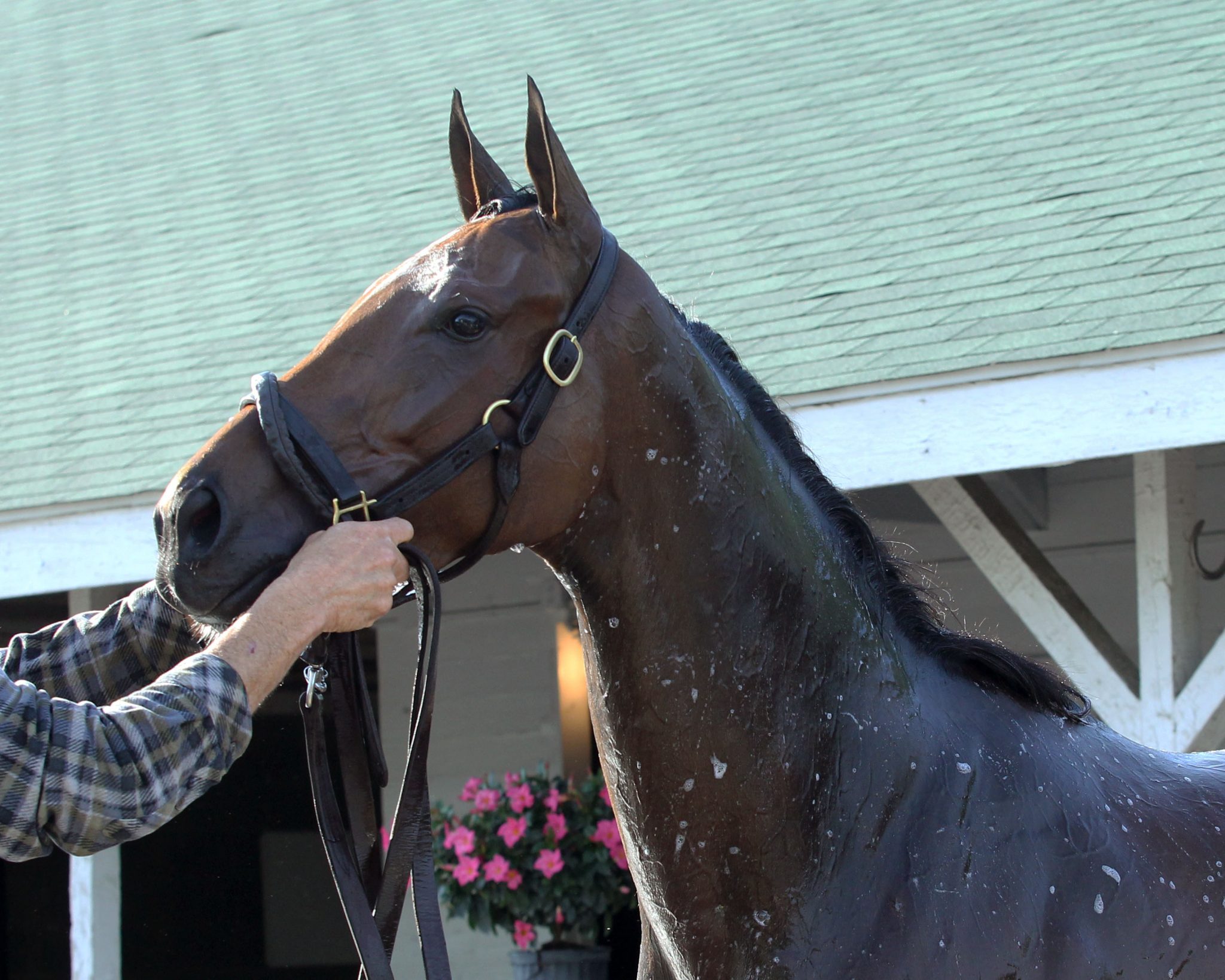 ABEL TASMAN—China Horse Club and Clearsky Farms’ Abel Tasman, winner of the Starlet (Grade I) at 2 and runner-up in last month’s Santa Anita Oaks (GI), visited the Churchill Downs main track for the first time after arriving Saturday from trainer Bob Baffert’s base at Santa Anita Park. The Quality Road filly jogged one mile under Dana Barnes, according to the exercise rider’s husband, and Baffert’s longtime assistant, Jimmy Barnes.

SALTY–Gulfstream Park Oaks (GII) winner Salty jogged Sunday morning for trainer Mark Casse.
“The first time Salty worked for us I was wowed,” assistant trainer Norm Casse said. “I like to hold judgment until horses can prove it to me in the afternoons but immediately I knew that we had a very serious contender for the Kentucky Oaks.”
The daughter of Quality Road is scheduled to jog Monday morning.
TEQUILITA–Dorothy Matz’s Tequilita returned to the track Sunday morning two days after putting in her final half-mile work for the Kentucky Oaks. She galloped 1 mile and schooled in the paddock with regular exercise rider Jo Saville aboard.
“We’re happy with her,” trainer Michael Matz said. “She did fine this morning.”
TORRENT–Westrock Stable LLC’s Torrent, currently sitting at No. 15 on the Oaks leaderboard, put in a sharp work Sunday morning, breezing a half mile in :47.60 under former jockey Greta Kuntzweiler. The daughter of Blame is still in need of one defection to make the Kentucky Oaks field.
“It was a smooth, fast work,” trainer Ron Moquett said of the move that was the eighth fastest of 61 at the distance. “Just what I wanted.”
VEXATIOUS–Calumet Farm’s Vexatious went for an easy jog once around the 1-mile main track at 9:15 a.m., just before the dirt surface closed early to make way for turf workers. Hall of Fame trainer Neil Drysdale said he is pleased with his filly’s conditioning.
“Now we just need 12 or 13 scratches and we’ll be in business,” the trainer quipped.
Joking aside, Drysdale believes the regally bred Giant’s Causeway filly is meant for Grade I success. He intended on the Kentucky Oaks for her from the time she broke her maiden at Del Mar in November. They got a late start in 2017 because of bad weather in Los Angeles and had to catch up by giving her three races in five weeks, starting with a 3-year-old allowance debut on March 9 against colts, won by Derby contender Battle of Midway.
“There was nothing else so we had to run against colts,” Drysdale said. “We were thinking this so we needed to get rolling and we didn’t want to run against Unique Bella first time out.”
WICKED LICK–Lee Mauberret’s Wicked Lick had a regularly scheduled walk day Sunday at trainer Brendan Walsh’s barn.
Runner-up to Oaks rival Farrell in the Fair Grounds Oaks (GII) in her most recent start, Wicked Lick is the only filly among the Oaks probable to have started her career on grass.
“She is a big-framed filly that wanted two turns and that is why she started on the grass (at Ellis Park),” Walsh said. “She broke her maiden at Churchill and then we tried her in a stake (the Jessamine-GIII) at Keeneland and she didn’t like the course.”
Wicked Lick’s dirt debut was at a one-turn mile at Churchill Downs but after that it was all two-turn tests at the Fair Grounds with Oaks rider Brian Hernandez Jr. aboard.