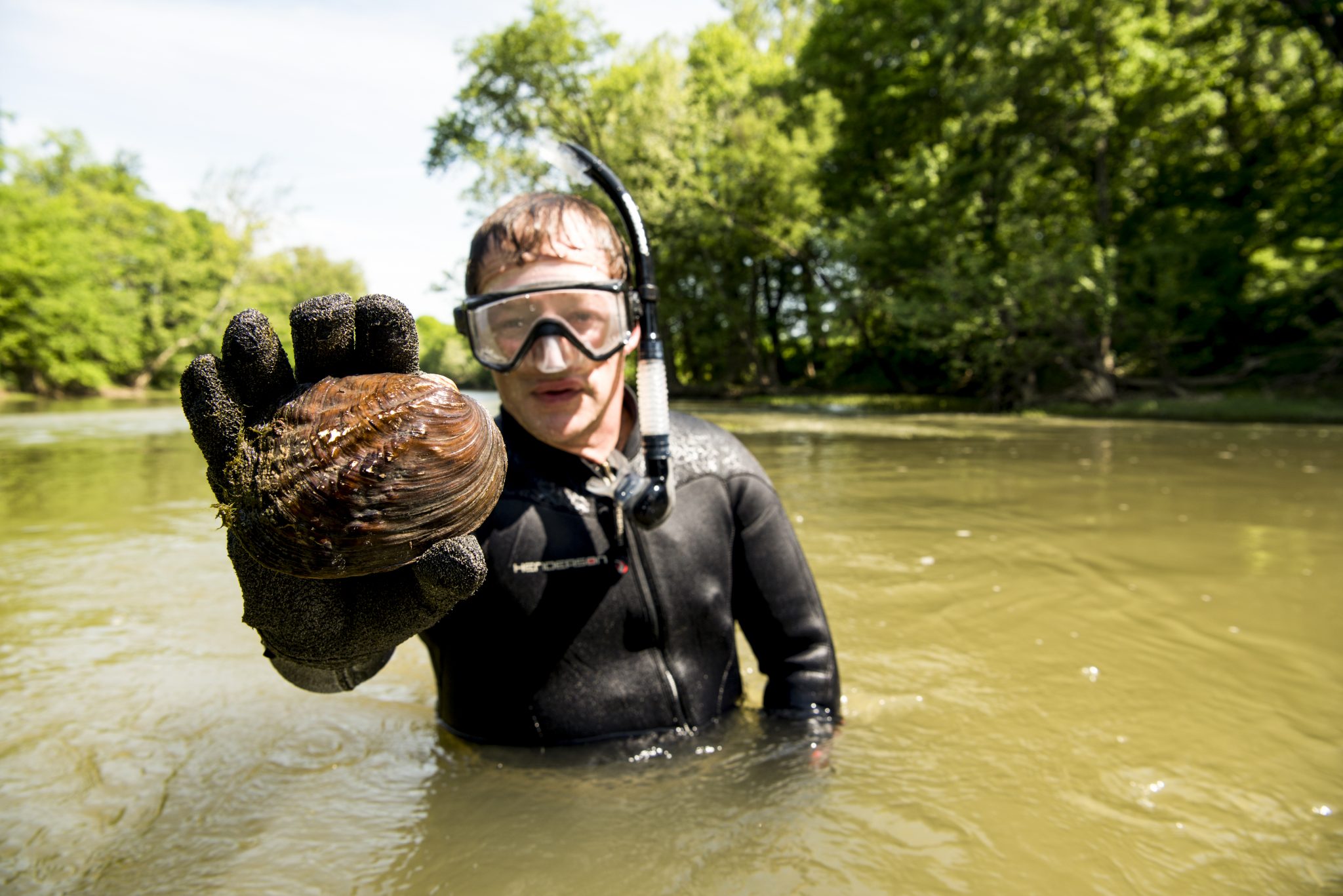 Monte McGregor, who specializes in Kentucky freshwater mussels with the Kentucky Department of Fish and Wildlife Resources, showcases a mussel in the shallow water of the south fork of the Licking River. Photo: Tim Webb

A quick shower of warm summer rain moved over an island in the Green River, but the small group of biologists and others who had just arrived by boat didn’t mind.

They were there to witness a Kentucky environmental milestone: The first major release of an endangered freshwater mussel back into a river in the state.

Monte McGregor, who was wearing a wetsuit, was soon off the island and in the river. He moved around in shallow riffles, carefully distributing 1,000 pink mucket pearly mussels on the sandy river bottom where that species hadn’t been seen for a couple of decades.

The date was July 5, 2007. The big national news around the Fourth of July holiday that year was that the bald eagle had recovered to the point that the birds had been taken off the endangered species list.

Leroy Koch, a senior biologist with the U.S. Fish and Wildlife Service, mentioned the eagle’s success that day and added, “We are working with mussels to try to get them to that point.”

But the eagle, the national symbol, is a majestic creature that soars through the sky and was the poster animal for the federal Endangered Species Act. The mussel—which lives most of its life underwater partially covered with sand and gravel, often has a funny name and looks like a rock—gets less love.

McGregor, a malacologist, or mussel expert, is director of the Kentucky Department of Fish and Wildlife Resources Center for Mollusk Conservation. He has made working with endangered mussels his life’s work.

“They are the very best indicators we have of the health of our streams,” he says. “There is no other species that reflects what is going on in a river better than mussels.”

McGregor, 50, grew up in Dawson Springs in western Kentucky and was a biology student at Murray State University when a professor offered him a job working with mussels at MSU’s Hancock Biological Station on Kentucky Lake. He went on to get a master’s degree from Tennessee Technological University and a doctorate from Auburn University. He worked for the Virginia Department of Game & Inland Fisheries for six years before coming back to Kentucky in 2002 to establish the mollusk center at the Forks of Elkhorn Creek near Frankfort.

From a somewhat crude beginning, he has created a state-of-the-art laboratory that makes its own water to exacting specifications and has back-up generators, so it never stops flowing over mussels. He has a staff of seven, with someone on duty every day.

Since the pink mucket release day 11 years ago, McGregor has placed many more endangered mussels into rivers in Kentucky and other states. That has required replicating in a laboratory a portion of the mussel’s incredibly complex reproduction cycle. An example of the complexity: In nature, a particular species of mussel requires a particular species of fish to swim by at just the right time to complete a stage of larvae development.

In the last several years, McGregor has taken a lead in a revolutionary process that replaces the fish with an in vitro process that uses just the right mixture of nutrients in a glass dish.

“He is the world leader in doing in vitro culture,” Koch says today. “His work in that area is really the tip of the spear.”

Critical role is at risk

The first Europeans to pay attention to mussels in North America were amazed at the wide variety they found.

“In Europe, they were used to seeing eight or 10 species on the whole continent,” McGregor says. “They come over here and they get 25 to 30 in one spot.”

But mussels have not responded well to the way we treat our waterways. We have built dams that change the flow of water and can limit access to the fish needed for reproduction. We have plowed fields down to the water’s edge, creating sediment that can smother mussels. Far too much oil, road salt, herbicides and fertilizer find their way into rivers.

For many years, mussels were harvested by the millions for their shells, which were made into buttons. The purple cat’s paw, for example, was driven to the brink of extinction because of its color. Other species are still harvested and ground into tiny pieces that serve as the nucleus for Asia’s cultured pearl industry.

Native mussels are increasingly crowded out by exotic zebra mussels, which came to North America in the ballast water of ships that had been in Eastern Europe’s Caspian Sea.

Mussels play a vital role in nature, including being a food source for otters, raccoons, heron and other creatures. (McGregor advises against human consumption unless they are from a farm pond that you know is not polluted, and they are not likely to be endangered.)

Because mussels feed by filtering their food from the water around them, they make rivers cleaner. McGregor has a time-lapse video on his computer that shows two aquariums filled with cloudy water. One has mussels and the other doesn’t. In an hour, the aquarium with mussels is clear.

Mussel reproduction in a river requires quite a bit of happenstance. It needs a male and a female, but they don’t meet. The male releases sperm into the water, which has to float downstream until it passes a female of the same species. She pulls the sperm in, fertilizes her eggs, and grows them into larvae inside her shell.

When the larvae reach a certain stage, the female mussel goes fishing. For bait, she uses a lure that is part of her anatomy. Some of these lures look like worms, some appear to be an insect, or the eye or tail of a minnow.

A fish comes along, sees the lure and thinks it’s dinner. It pulls on the lure and the female releases thousands of larvae, some of which embed themselves in the gills of the fish.

McGregor’s explanation helps in visualizing how this happens: “If you’ve ever watched a fish eat, they will eat it, spit it out, then eat it again. It’s the perfect way to get the larvae into the gills.”

The larvae spend a few weeks in the gills, getting nutrients from the fish as it moves up and down the river. Then the larvae drop off and sink to the bottom as tiny mussels, ready to begin a life cycle of their own.

If that weren’t complicated enough, some species of mussel require a certain species of fish to make it all work. If the wrong fish pulls the lure, no baby mussels.

For reproduction in the lab, McGregor gathers gravid (the mussel equivalent of pregnant) females from a river, cleans them up and surgically removes the larvae. Then he knocks out the appropriate species of fish and sprinkles the larvae over the gills. A major part of his work over the years has been finding which species of fish works with which mussel.

“Sometimes we have no idea and nothing seems to work,” McGregor says. “It will take us four or five years to figure it out.”

The in vitro reproduction, which only a few people in the world are doing, already is offering new hope for some mussel species. This enables McGregor to skip the fish stage. He removes larvae from a female and puts them in a dish that goes into an incubator. To mimic the fish-gill environment, he adds nutrients, including serum drawn from fish blood. He also has found that rabbit blood serum works and is easier to obtain.

That’s what he used with the golden riffleshell, a Virginia mussel that was almost wiped out by a chemical spill in the Clinch River in 1998. Tim Lane, who works with mussels in Virginia, said years of efforts to raise the golden in labs there produced only four individuals.

In 2016, Virginia biologists found three gravid golden females and drove them to Pikeville, Kentucky, where they handed them over to McGregor in a McDonald’s parking lot. Last year, he returned 700 mussels that were large enough to be released into the wild and plans to do the same again this year.

He also is producing purple cat’s paw mussels that were in such dire straits that they were found only in one creek in Ohio.

That mussel is still not doing well in Ohio, but is one of six species he has reintroduced into Kentucky’s Licking River.

And the pink mucket? It’s been released in 25 places, most of them in Kentucky.

“We’ve taken an animal that 10 years ago we would collect maybe 10 animals in the wild, and now there are several thousand in these places,” McGregor says. “So, we’re making a considerable dent.”