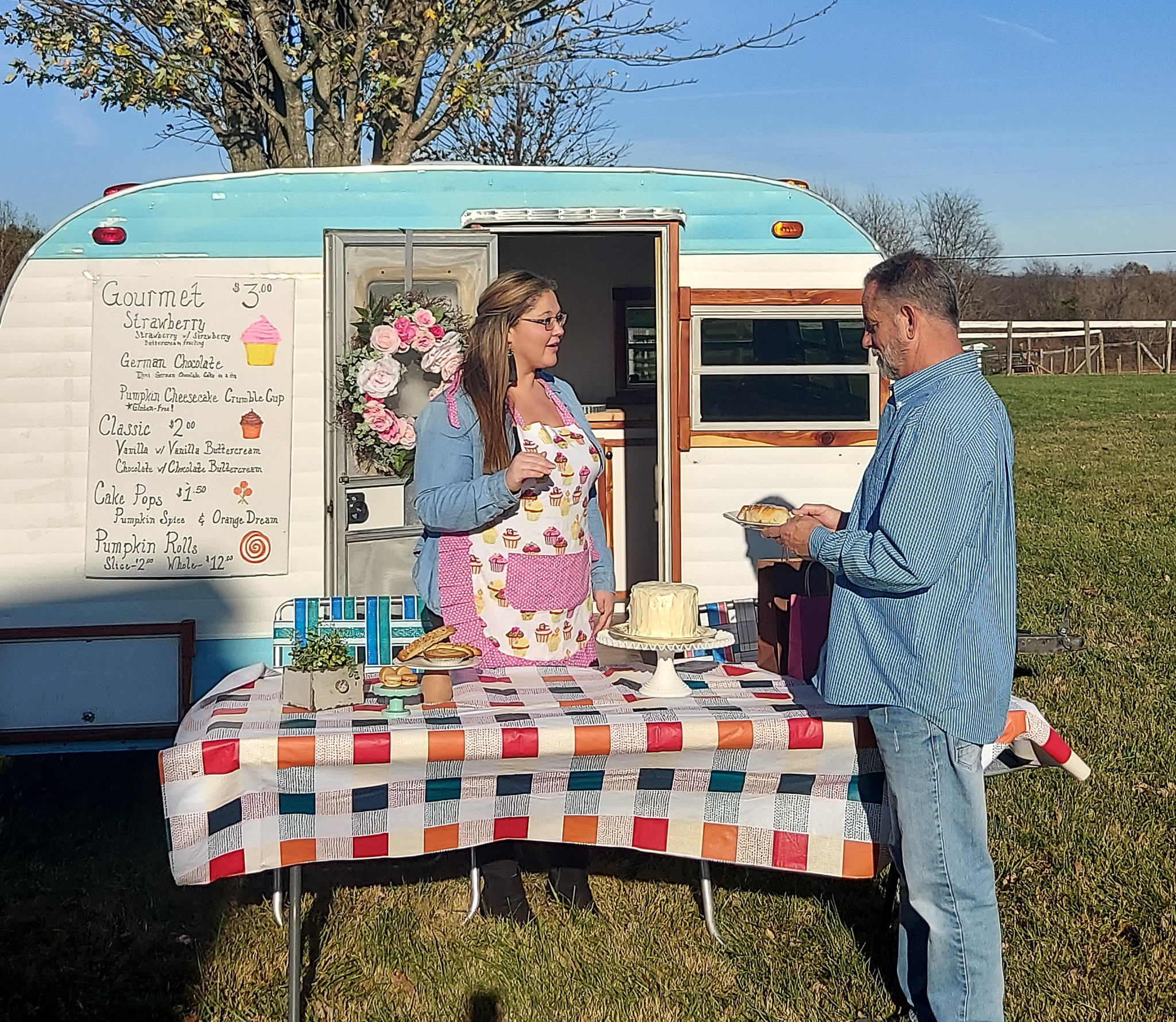 “WE’LL MAKE PRETTY MUCH ANYTHING our customers are looking for,” says Stephanie McDowell, who co-owns Stella’s with her mom, Paula Swan, a consumer-member of Salt River Electric. “We don’t often say we can’t do something,” she says. “What’s in your imagination?”

Making and selling cakes has been a passion for Swan since she was a teenager, so naturally it became McDowell’s dream, too. Two-and-a-half years ago, she left her former career to pursue baking full time and they opened Stella’s in October, after customers clamored for it.

“Mom and I have had dreamed about this business for a long time, and we’ve had a very warm welcome since opening,” says McDowell.

Stella’s takes custom orders for cakes, cupcakes, cake pops and decorated cookies. “Mom makes the cookies and helps me with The Cupcake Camper, which we sell goodies from on weekends and rent for birthday parties for kids to decorate cupcakes.” McDowell makes and decorates the cake products, offering gluten-free and diabetic-friendly options.

“There aren’t many mobile bakeries out there. I’ve not heard of any others,” she says.

“Everything we make is fresh and from scratch,” she says. Stella uses real butter and McDowell says most people can taste the difference between a store-bought and made-from-scratch cake.

Her mom, Paula, makes the cut-out sugar cookies with royal icing. Stella’s will make any type of theme you like. “The cookies are colorful and vibrant, such as the mermaids we made this weekend or floral cookies made for an 80th birthday party,” says McDowell.

She says the name of the business is a play on their names, Stephanie and Paula. “There’s also a little bit of my favorite childhood book in the name, Stellalulu, which is about a baby bat.” She adds that she had also preplanned to name a daughter, Stella, but she had three boys instead.

Sometimes their creations are weather and holiday inspired, but she says many times “people will write and ask us for things such as cotton candy cakes and cupcakes, so we did that.” She says, whenever her best friend’s birthday comes around in July, Keyra always challenges her to create a new recipe. “That’s how the Reece’s cake was created,” she says.

McDowell says she is constantly testing new recipes. “A friend of mine has celiac disease, and he inspired me to cook gluten free and sugar free. A lot of what I do is inspired by the people in my life,” she says.

Stella’s makes custom gluten free and sugar free items upon request, and they always have a gluten-free and diabetic-friendly option available on The Cupcake Camper.

“I have several people who return, because it’s hard to find those things in bakeries, especially that taste good, too. If my kids will eat it, then I know it’s great.” She laughs, “One of my son’s favorite cake pop is my diabetic-friendly, gluten-free chocolate cake pop!”

McDowell says many people complement the frosting they make because it’s not overly sweet. “They say, ‘I don’t like frosting, but I love yours,’ or ‘I’ve never liked frosting before but yours is amazing.’”

McDowell says they do a lot of weddings, making the wedding cake, smaller cutting cakes and wedding cupcakes. “I have a beautiful signature cupcake stand that my brother, Ritchie, made for me about eight years ago. It has been used in at least 20 weddings,” she says. “I have other rustic stands that are used to display cupcakes for brides and grooms.”

Stella’s also offers holiday gift boxes. “I make a pretty box and take preorders on those. We do a preorder Christmas box with a variety of goodies: four cupcakes, four cake balls, chocolate covered pretzels, chocolate covered marshmallows, and a bakery item that is for the holiday—a Christmas tree,” McDowell says. “We come up new boxes every year for Valentine’s, Thanksgiving and Christmas.”

Stella’s offers chocolate molds that kids use a fake wooden mallet to crush and candy comes out. They also offer cocoa bombs in a variety of flavors.

What excites her most? “We try to aim where we are affordable. I’m here to make a lot of people happy. It’s awesome to see these kids get so excited and brides gush because their cakes are exactly what they want,” says McDowell.

McDowell says she is thankful for Stella’s loyal customers who come back for every birthday cake and for every event in their lives. “Without them, me and my mom would not have our dream coming true.”