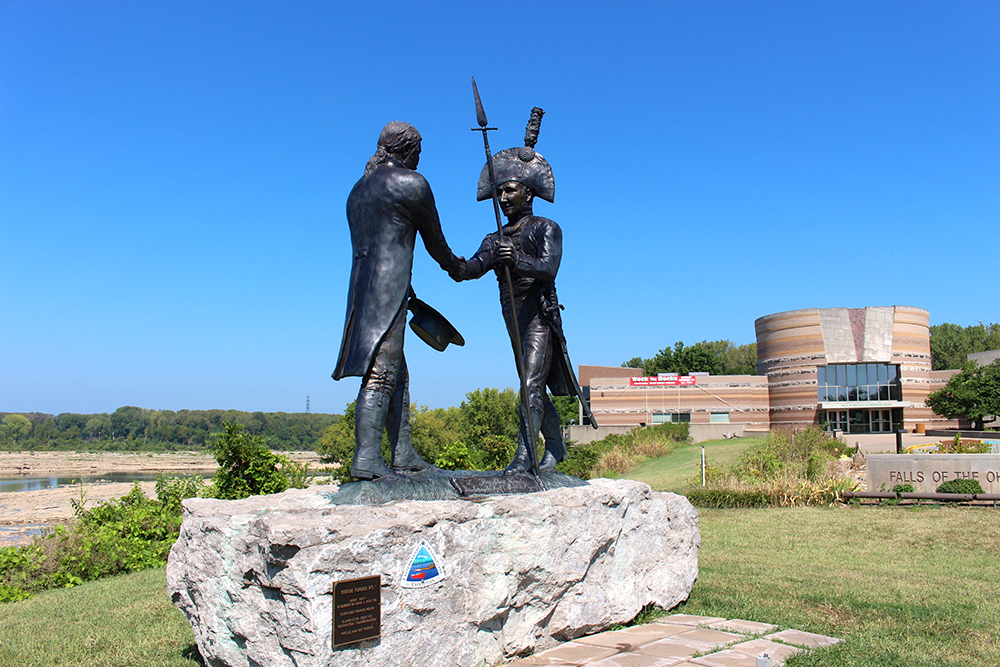 The larger than life statue of Meriwether Lewis and William Clark shaking hands at the Falls of the Ohio State Park in Clarksville, Indiana. Photo: Dave Shuffet

A history-making handshake at the Falls of the Ohio

On October 14, 1803, two old friends came together, shook hands and embarked on a perilous journey through unknown lands that would take them all the way to the Pacific Northwest and into the pages of history. On that day at the Falls of the Ohio in Clarksville, Indiana, across the river from Louisville, Captain Meriwether Lewis, who had traveled downriver from Pittsburgh, joined Captain William Clark, whom he had asked to co-command this exploratory mission.

When President Thomas Jefferson initiated the Louisiana Purchase—bought from France for $15 million and totaling 828,000 square miles—he could hardly wait to learn about this mysterious land west of the Mississippi. He appointed Lewis to form an expeditionary party. The Corps of Discovery was born. It involved 33 courageous explorers, including nine Kentuckians and William Clark’s Newfoundland dog.

In May 2019, the Falls of the Ohio State Park was included in the 4,900-mile Lewis and Clark National Historic Trail. Managed by the National Park Service, the trail is accessible via hiking, kayak, canoe or car. It follows the route of the Corps of Discovery’s trek.

The headquarters and museum at the Falls of the Ohio State Park are on the Indiana side of the Ohio River, but also should be a source of pride for Kentuckians, because two-thirds of the park is in Kentucky. It is the site of the largest exposed Devonian fossil bed in North America. It is a destination for geology enthusiasts, fishermen, kayakers, canoeists, hikers, birders and historians. “People come from all over the world to see the Falls,” but the addition of the Falls park to the national trail has already increased tourism, says Dale Brown, assistant manager of the state park.

The stretch from Pittsburgh to the Falls of the Ohio is part of the recent addition to the national trail. Pittsburgh marks the beginning because it’s where Lewis and a small party of men set sail down the Ohio River to rendezvous with Clark. But many historians argue that the true beginning is at the Falls of the Ohio where Lewis and Clark came together with that history-making handshake.

Many agencies, foundations and volunteers have worked hard to get the Falls added to the national trail—and that hard work has finally paid off.

The Falls has long been one of my favorite destinations because of its diversity. The National Historic Trail inclusion is but one more shining star added to a special place—and I have a new appreciation for what it means to be here, standing in the footsteps of Lewis and Clark, leaders of one of the greatest expeditions in American history.