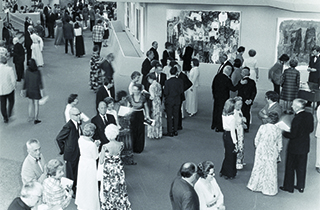 Where can you find 1963 in Kentucky—where the Mad Men aesthetic of mid-century cool in dress, design, and décor is imprinted onto the destination?

Turns out, there are lots of places. With the Mad Men AMC cable television series’ homage to the ’60s coming to a close in the spring of 2015 when the last seven episodes air, we thought it was time to round up some outasight sites where you can get hip to the hit show’s vibe.

Although not an obvious choice, Bardstown must be included because one of its (and Kentucky’s) most iconic attractions was the title of episode 3 in the third season: “My Old Kentucky Home.” It’s not a stretch to say that Judge John Rowan, who built Federal Hill Mansion, was an eccentric on the order of Bertram Cooper, the no-shoes-in-the-office founding partner of the Sterling Cooper advertising agency.

Composer Stephen Foster’s uncle, Rowan became one of Kentucky’s foremost defense lawyers and was a high-powered politico, but he is remembered for killing Dr. James Chambers in an 1801 duel fought due to a gentlemen’s disagreement over who was the expert in classical languages. Small wonder that the fussy linguist was also, according to My Old Kentucky Home State Park Manager Alice Heaton, “very persistent in having his daughters learn proper penmanship and the art of writing.”

You’ll find a Mad Men mother lode in Bowling Green, beginning with the National Corvette Museum and its Nostalgia area. It’s true that one of the world’s most legendary cars was born in 1953, but upgrades to the design utterly captivated drivers in the 1960s. Suave, sporty, and oh-so-cool, it’s exactly the kind of car Don Draper would want to slip into when America’s romance with the open road was at fever pitch.

Head down the Nostalgia area’s Main Street at the museum to see an old service station with authentic gas pumps and a mid-century barbershop with striped barber pole—you almost expect someone to exit the shop sporting a crew cut. You’ll also see vintage Corvettes, advertisements, and other memorabilia, and a tribute to the stars of the 1960s-era Route 66 television show.

Long before Draper began collecting awards for his brilliant ad campaigns, Leon Vincent was amassing vintage posters of movies of the 1960s. Like Draper, the Bowling Green architect has an appreciation for eye candy—in this case, movie poster art hawking such films as 2001: A Space Odyssey and Dr. Goldfoot and the Bikini Machine, surely a fave among the “Mad Men.”

Although Vincent began his collection in 1990, he opened Artistic Soul Studio just two years ago.

“I have a monster horde of these things,” he says.

Among the collections of decorative arts from the 1960s, the Kentucky Museum at Western Kentucky University has a Sputnik chandelier—named for the satellite launched by the Soviet Union in 1957—and Eero Saarinen-designed Tulip chairs, considered futuristic and “space age” at the time.

More ’60s swank
In Danville, the Norton Center for the Arts is an architectural showpiece on the campus of Centre College. It boasts a pedigree à la Frank Lloyd Wright; in fact, designing architect William Wesley Peters collaborated with Wright for 25-plus years on projects, including the Guggenheim Museum.

“Much of the iconic clothing portrayed on Mad Men illustrates timeless style principles,” says Mandy Prather, director of Marketing and Development. “Likewise, the building’s architecture is ageless and sophisticated.”

The Center’s two venues—acoustically superb Newlin Hall and the more intimate Weisiger Theatre—stay busy September through May with professional touring presentations, music and theatrical productions, lectures, and other entertainment. Its Grand Foyer provides the backdrop for a large art collection year-round.

Kelly Hubbuch, communications coordinator for Heaven Hill Distilleries, describes a 1960s atmosphere of opulence and luxury, “where visitors experience Pop Art-adorned walls and hear the Shangri-Las playing softly in the background on the jukebox.”

Here’s another place to “hang loose,” to use a phrase from the times. Dewey’s, a new cocktail lounge overlooking the lake behind May Lodge at Jenny Wiley State Resort Park in Prestonsburg, is all about the 1960s.

“We looked to the existing mid-century modern elements at the lodge for influences for the new space,” says project architect Anne Saint-Aignan, noting the lodge’s open floor plan and use of organic materials, including wood and stone.

“Mid-century modern designs utilized structural systems that allowed for expansive areas of glass, in effect bringing the outdoors in—which you appreciate in the perimeter rooms of the lodge, including Dewey’s.”

Gee-Wiz toys
Yes, the greatest two minutes in sports are well behind us for this year, but Louisville’s Kentucky Derby also played a role in Mad Men’s “My Old Kentucky Home” episode. Roger Sterling hosts a Derby Day party and staff left behind to work engage in some horseplay—which happens to be the subject of the museum’s latest exhibit.

On display through the end of the year: nearly 60 historic equine toys accompanied by digital interactives and original music created by Kentucky quintet Whistle Peak. A hands-on game experience, the exhibit captures the fun of the Derby through toys like Gee-Wiz, “The Racing Game Sensation,” and The Jockey Collection action figures. A circa-1970s, coin-operated Kentucky Derby-themed carousel ride has also taken up residence for this exhibit.

DESTINATIONS
Don’t flip your wig. We’ll tell you where to find the 1960s in Kentucky: