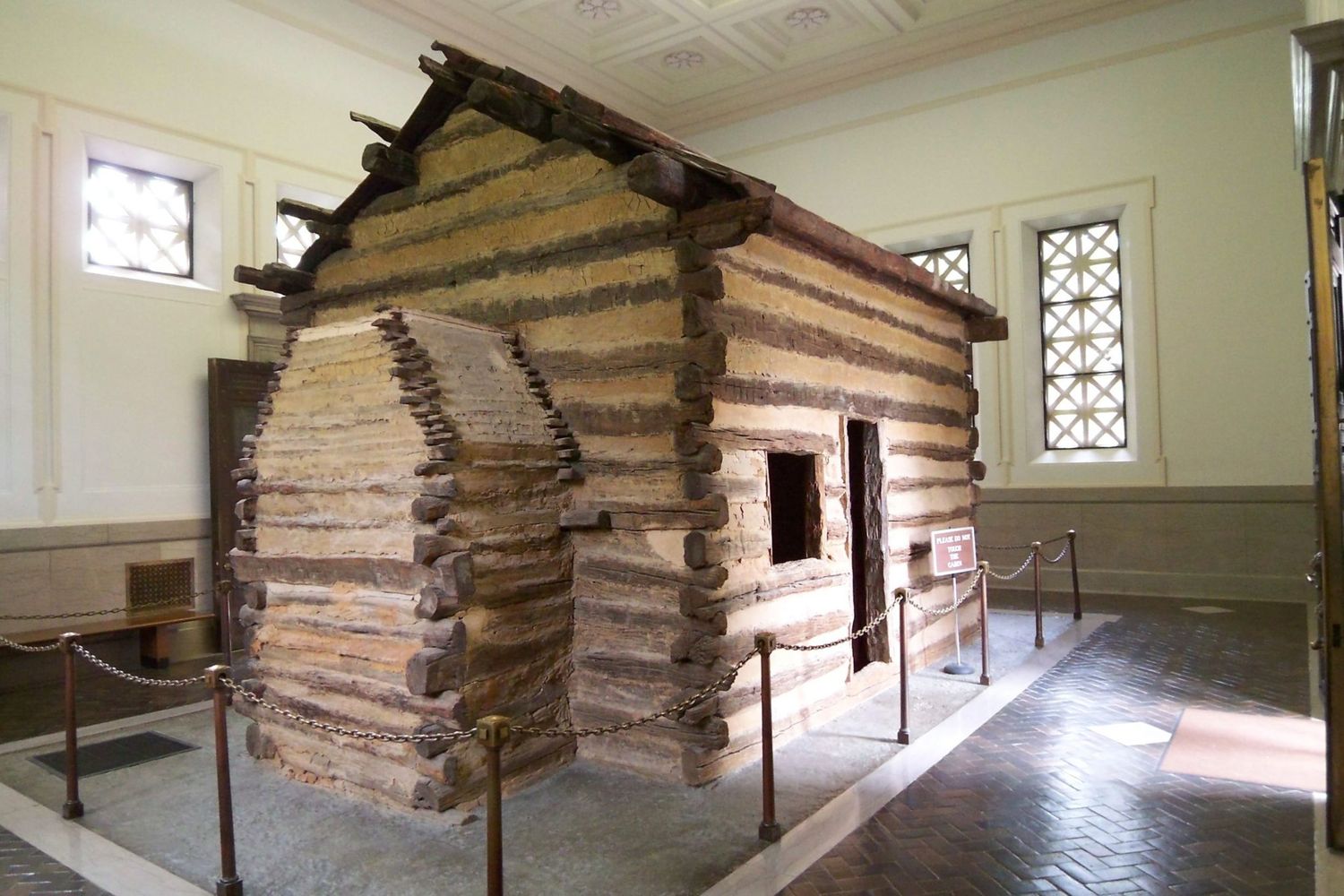 On the site where Abraham Lincoln was born in 1809, visitors can observe the "symbolic cabin" representing the humble beginnings of the 16th President of the United States. PHOTO: Abraham Lincoln Birthplace National Historical Park

One hundred years after Abraham Lincoln’s birthplace south of Hodgenville, Kentucky, was designated a National Park, the LaRue County community will mark the centennial on July 16 and 17 with a series of celebrations fit for presidents, but all are invited.

The weekend events connect the three main destinations on Kentucky’s Lincoln trail. The Sinking Spring farm where he was born in 1809 is about 2 miles south of Hodgenville. Lincoln’s boyhood home on Knob Creek is about 10 miles away, while the Lincoln Museum is on Hodgenville’s city square.

After a noon wreath-laying ceremony in the Lincoln Sculptures Plaza in Hodgenville on Saturday, organizers plan a motorcade to the birthplace, where the main event of the centennial is planned from 1-3 p.m. The site is located in the Eastern Time Zone.

The weekend includes periodic appearances by presidential re-enactors portraying four of the five U.S. presidents who were at one time present at the birthplace. Presidents Abraham Lincoln, Theodore Roosevelt, Woodrow Wilson, and Dwight Eisenhower will be portrayed at several presentations, including a special “Dinner with Eisenhower” at the Hodgenville Woman’s Club on Saturday, July 16. Admission for the dinner is $50.

Though the cornerstone for the memorial at Lincoln’s birthplace was laid by President Theodore Roosevelt in 1909 and the building was dedicated by President William Howard Taft in 1911, the site was not made a national park until July 17, 1916, when the property was donated to the federal government by the Lincoln Farm Association.

The site of the Lincoln family farm at Knob Creek where the future president lived from age 2 to 7 was privately owned until 2001, when it also became part of the Abraham Lincoln Birthplace National Historical Park.

The efforts to honor Lincoln where he first lived have been led by the communities themselves. Gary Ferguson, a veteran Park Ranger at the Lincoln birthplace, tells Kentucky Living that honoring Lincoln at those sites has historically not been a priority of Congress.

“Although Abraham Lincoln is viewed by many today as the ‘premier’ American president, some of the sites across the three states in which he lived that are associated with his life are still viewed as insignificant and therefore unworthy of being a state or national park,” Ferguson says. “I find this to be troubling for someone who had such a great impact on our country.”

You can read all of Ferguson’s comments below.

“My earliest recollection is of the Knob Creek place,” Lincoln wrote in 1860 in reply to an invitation to visit his childhood home in Kentucky. Among the many childhood memories Lincoln shared of his time in Kentucky is how he was saved from drowning after he fell in the swollen Knob Creek. Lincoln recalled that a friend named Austin Gollaher extended a long tree limb from the bank to bring the youngster to safety.

For more information about the centennial weekend, visit www.lincolnmuseum-ky.org or call (270) 358-3163.

Kentucky Living asked Gary Ferguson, a veteran Park Ranger at the Abraham Lincoln Birthplace National Historical Park, about the history of the historic sites and why it took until 2001 for the Knob Creek farm to become part of the National Park Service:

Abraham Lincoln, the Great Emancipator, is viewed by most Americans, as well as many people around the world, as the greatest American president. That is the attitude toward Lincoln today. However, it was not always that way. Although Abraham Lincoln was born in Kentucky he was not always well-liked by people of the state. A good example of this is that he did not carry the state of his birth in either the 1860 or 1864 elections. He was viewed by many southerners, including Kentuckians, as an abolitionist. That attitude toward Lincoln did not begin to change in Kentucky until the 1890s.

In 1906, the Lincoln Farm Association developed the idea of building a memorial to honor the 16th president of the United States. Although they sought government monies to assist with the project, no government monies were forthcoming. The idea of the Lincoln Farm Association was to purchase, preserve, and maintain the Sinking Spring Farm and the birthplace of Abraham Lincoln and to have it designated as a national park. The project was completed in early 1911 without government assistance or backing in any form and the Lincoln Farm Association began the efforts to establish the birthplace as a national park. However, they found little support in Congress for this idea. That did not change until 1915 when a few Congressmen began to back the effort. This effort culminated with the signing of House Resolution 8351 by President Woodrow Wilson on July 17, 1916, establishing the Abraham Lincoln Birthplace National Park.

However, the prominence of Abraham Lincoln as the “premier American president” still did not carry much weight in Congress as funding for the new park remained very low. The attitude of Congress toward preserving the Lincoln sites in Kentucky still remains low even today. A good example of this is the Knob Creek Farm. The Lincoln Boyhood Home at Knob Creek was established by the Howard family in the early 1930s and descendants of the family continued to operate the site until 1998. The family made attempts to get the site established as a national park but all of their attempts failed. In early 1998, Congress passed a bill stating that Congress would not set aside any monies for the purchase of the land and the only way they would accept the property was through donation. That same year a movement was started that involved various preservationists groups as well as the Kentucky State Legislature to raise monies to purchase the site. This was achieved and in November 2001, the site was finally donated to the National Park Service as Abraham Lincoln Boyhood Home at Knob Creek. Due to its link to Abraham Lincoln it was designated and placed under the administration of the Abraham Lincoln Birthplace National Historical Park in Hodgenville, Kentucky, which is only 10 miles away.

Although Abraham Lincoln is viewed by many today as the “premier” American president, some of the sites across the three states in which he lived that are associated with his life are still viewed as insignificant and therefore unworthy of being a state or national park. I find this to be troubling for someone who had such a great impact on our country. Without the efforts and persistence of Abraham Lincoln we would not have the country that we have today. He was and still remains the “Great Emancipator.”