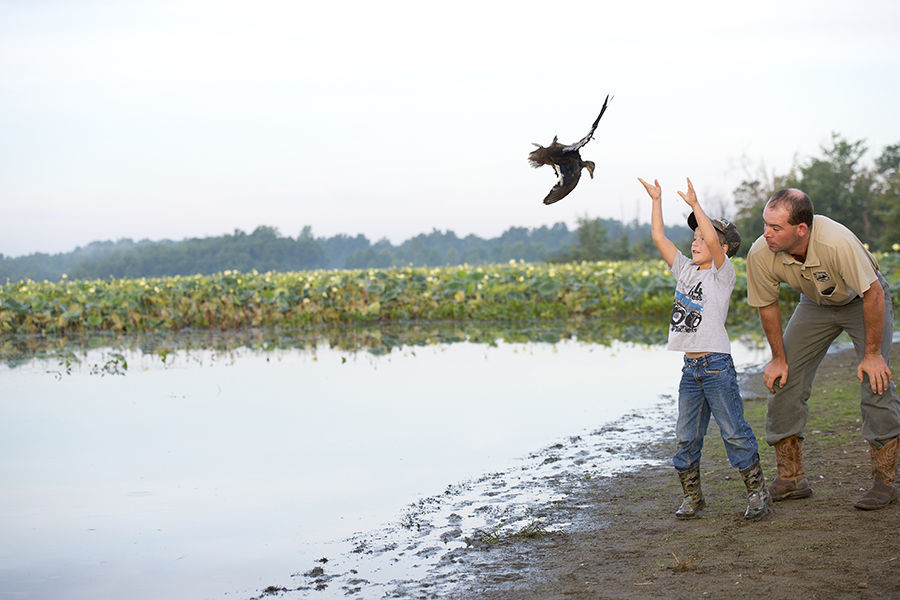 Take a close look at the legs of the Canada geese the next time you’re in a park. You just might see a silver metal band.

These bands are an important research tool used to monitor populations and determine migration routes. Each year, the Kentucky Department of Fish and Wildlife Resources captures and bands approximately 2,400 wood ducks, 1,800 doves, and 1,200 geese.

Band research can reveal as many mysteries as it solves. For example, a number of Canada geese born in Kentucky will undergo a “molt migration” when they reach 1 year old. They’ll fly to Hudson Bay or James Bay in northeast Canada for the summer, then return to Kentucky for the rest of their lives. Other geese born in Kentucky never leave the state.

Research also reveals the ebb and flow of geese migration into the state. For example, every Canada goose taken by hunters during the September season is Kentucky-born. By January, due to the influx of birds coming from the north, only 40 percent of the hunter’s bag comes from the state.

Returned bands show that many of the state’s wood ducks migrate to Louisiana and Alabama for the winter. A fair number of male wood ducks don’t return to Kentucky, however. “We get a ton of band recoveries from the north, mostly Wisconsin and Iowa,” says John Brunjes, migratory bird biologist for the Kentucky Department of Fish and Wildlife Resources. “It looks like the male wood ducks go south, meet a female, then follow them back to their state.”

Studies show some interesting returns on doves as well. While birds may be abundant for the September 1 opening of dove season, many hunters believe doves fly south soon afterward—especially following the onset of a cold front.

Band recoveries show that doves likely don’t move out of the state until the waning days of October. Birds are simply going elsewhere and away from hunted areas.

The banding research extends beyond game birds. This summer, Kentucky Fish and Wildlife researchers will attach colored bands to the legs of interior least terns. These small shorebirds are the only endangered species of bird that nest in Kentucky.

If birds banded this year can be recaptured next year, researchers will attach a miniaturized GPS unit to each, hoping to determine the migration path of the state’s interior least terns.

“We think they fly south in the winter and end up in Costa Rica, but we really don’t know for sure,” Brunjes says. “This project could help us figure it out.”