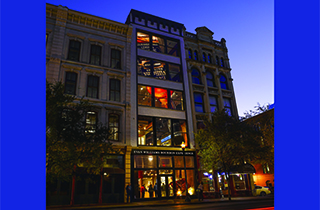 For more than 200 years, master distillers and Mother Nature have worked side by side, their combined assets of tradition and limestone—some say a little magic, too—blending harmoniously to produce fine Kentucky bourbon.

The formula is so successful that 95 percent of the world’s bourbon is made in the Bluegrass, at distilleries renowned worldwide. The Kentucky Bourbon Trail—a series of bourbon distillery tours created in 1999 by the Kentucky Distillers’ Association—takes you to eight of their member distilleries, where you can study and sample America’s only native spirit.

Along the way, you learn that Kentucky limestone acts as a natural filtration system for the water that goes into making bourbon; you see enormous mash tubs at work as yeast converts sugar to alcohol to produce the new distillate, called white dog, that goes into the signature charred barrels; and you inhale the mellow caramel and oaky aromas in the rickhouses as countless barrels of bourbon age to liquid perfection.

“It takes three days to make and then you sit back five to 10 years to wait until it’s ready,” says Alan “Big Al” Tenniswood, a tour guide at the Wild Turkey Distillery in Lawrenceburg.

“Bourbon is fun and it’s different, and at all of the distilleries, everyone’s upping their game,” says Mint Julep Tours’ Joni Goodin, who has led dozens of tours along the Kentucky Bourbon Trail and notes that interest in bourbon and the Trail is exploding.

“It’s becoming as popular as Wine Country tours,” she says, “and that has to do a lot with Kentucky hospitality.”

Four Roses Distillery
1224 Bonds Mill Road, Lawrenceburg
(502) 839-2655
www.FourRosesBourbon.com
Distinctive because of its Spanish Mission-style architecture and free tours, this distillery is on the National Register of Historic Places. Tours here begin with a brief video and hands-on presentation, and wrap up with a sampling of Four Roses’ award-winning bourbons. And make no mistake; it is award-winning. Whisky Advocate magazine named Four Roses’ 2013 Limited Edition 125th Anniversary Small Batch Bourbon as the American Whiskey of the Year. It earned the title in 2012, too.

Heaven Hill Bourbon Heritage Center
1311 Gilkey Run Road, Bardstown
(502) 337-1000
www.bourbonheritagecenter.com
The Heaven Hill Bourbon Heritage Center presents the history of Kentucky bourbon in a detailed exhibit just steps from its gorgeous, barrel-shaped tasting room. Smell bourbon at different cycles in the aging process and shop at one of the finest bourbon-centric gift shops on the Trail.

Jim Beam Distillery
526 Happy Hollow Road, Clermont
(502) 543-9877
www.JimBeam.com and www.AmericanStillhouse.com
Bourbon and the Beam family name have been intertwined for more than 200 years of bourbon history and bourbon making. In 2012, the Jim Beam American Stillhouse tours began, taking visitors behind the scenes for an interactive, multisensory experience. Explore the museum with its collection of Jim Beam limited-edition decanters. Catch a demonstration of a craftsman building a barrel by hand. Sip in the state-of-the-art tasting room and dine at the newly opened Fred’s Smokehouse, named after Fred Noe, seventh-generation master distiller and great-grandson of Jim Beam. Catch several videos at www.AmericanStillhouse.com.

Maker’s Mark Distillery
3350 Burkes Spring Road, Loretto
(270) 865-2099
www.MakersMark.com
This is where you can hand dip your own souvenir bottle to create the iconic red wax seal. Step into one of three glass-enclosed tasting rooms and sample a bourbon flight: Maker’s White—the white dog, although, according to assistant manager of visitor relations Jacklyn Evans, it is still sweet and can be purchased in the gift shop; the fully mature Maker’s, which is what you find in the stores; the over-mature Maker’s, available only on tour and tasted for educational purposes; and Maker’s 46, beautifully finished with French oak staves.

Town Branch Distillery
401 Cross Street, Lexington
(859) 255-2337
www.kentuckyale.com/Town-Branch
The first new Lexington distillery in more than 100 years, Town Branch was named for the waterway on which the city was founded—and where much bourbon production was once centered. It joined the Trail in October 2012.

“Because a lot of the other distilleries are in more rural areas, I think visitors find it novel to come to a distillery right here in downtown,” says Hal Gervis, global operations manager for Alltech Lexington Brewing and Distilling Company. “We are also the only distillery that has a brewery on-site, so visitors can taste and learn about both our whiskeys and our beer.”

Wild Turkey Distillery
1417 Versailles Road, Lawrenceburg
(502) 839-2182
www.WildTurkeyBourbon.com
New for 2014 is the Wild Turkey Visitor Center, perched on the edge of a cliff overlooking the scenic Kentucky River. Tours are offered every hour and there is a choice of tastings, including the original Wild Turkey 101 and newer products like American Honey, Forgiven, and Spiced. Bourbon maestro Jimmy Russell will complete his 60th year at Wild Turkey this fall; son Eddie Russell has just over half that experience at 33 years. Wild Turkey also maintains several warehouses in Jessamine County, served by Blue Grass Energy Cooperative.

Once you’ve acquired all eight distillery stamps, you can pick up your official souvenir T-shirt at one of these locations.

Destinations
For more info on the Kentucky Bourbon Trail and the Kentucky Distillers’ Association, visit www.KyBourbonTrail.com.

Kentucky bourbon by the numbers
5 million barrels of bourbon aging at any given time at Kentucky distilleries.

52,000 number of people from 46 states, District of Columbia, and 15 countries who attended Bardstown’s 2013 Kentucky Bourbon Festival, www.KyBourbonFestival.com, held annually the third week of September—mark your calendar now for September 16-21, 2014.

1833 the year of Abraham Lincoln’s liquor license for the Illinois tavern he once owned. See this, a replica tavern, and lots more bourbon-related memorabilia at Bardstown’s Oscar Getz Museum of Whiskey History, www.WhiskeyMuseum.com.

500 Kentucky Bourbon Trail is one of National Geographic’s series and book Drives of a Lifetime: 500 of the World’s Most Spectacular Trips.

The Bourbon Loft is tucked atop the Kentucky Bourbon House, www.ColonelsCottageInns.com, a circa-1787 historic home on Bardstown’s Courthouse Square, (502) 507-8338. Simply step downstairs to enjoy bourbon-infused appetizers and desserts at The Pub at Chapeze House, or make reservations in advance for bourbon tastings or dinners held nightly at the Kentucky Bourbon House.

Fred’s Smokehouse is a bourbon-inspired café, adjacent to the Jim Beam American Stillhouse in Clermont; catch the grand opening video at www.AmericanStillhouse.com.

DID YOU KNOW?
The Beaumont Inn, www.BeaumontInn.com, in Harrodsburg, located between Maker’s Mark in Loretto and Four Roses in Lawrenceburg on the Kentucky Bourbon Trail, offers personalized bourbon tasting with the innkeeper. Slip into the leather-chair comfort of the tasting room off the inn’s Old Owl Tavern and take a guided tour with Dixon Dedman through the taste profiles, history, and nuances of up to six Kentucky bourbons. Dedman’s ever-expanding bourbon collection includes some rare and extraordinary bourbons: Pappy Van Winkle 20 and 23, George T. Stagg, and Jefferson’s Reserve Presidential bottlings. Cost $35/person: profile tasting; $55/person: ultra-premium bourbons.