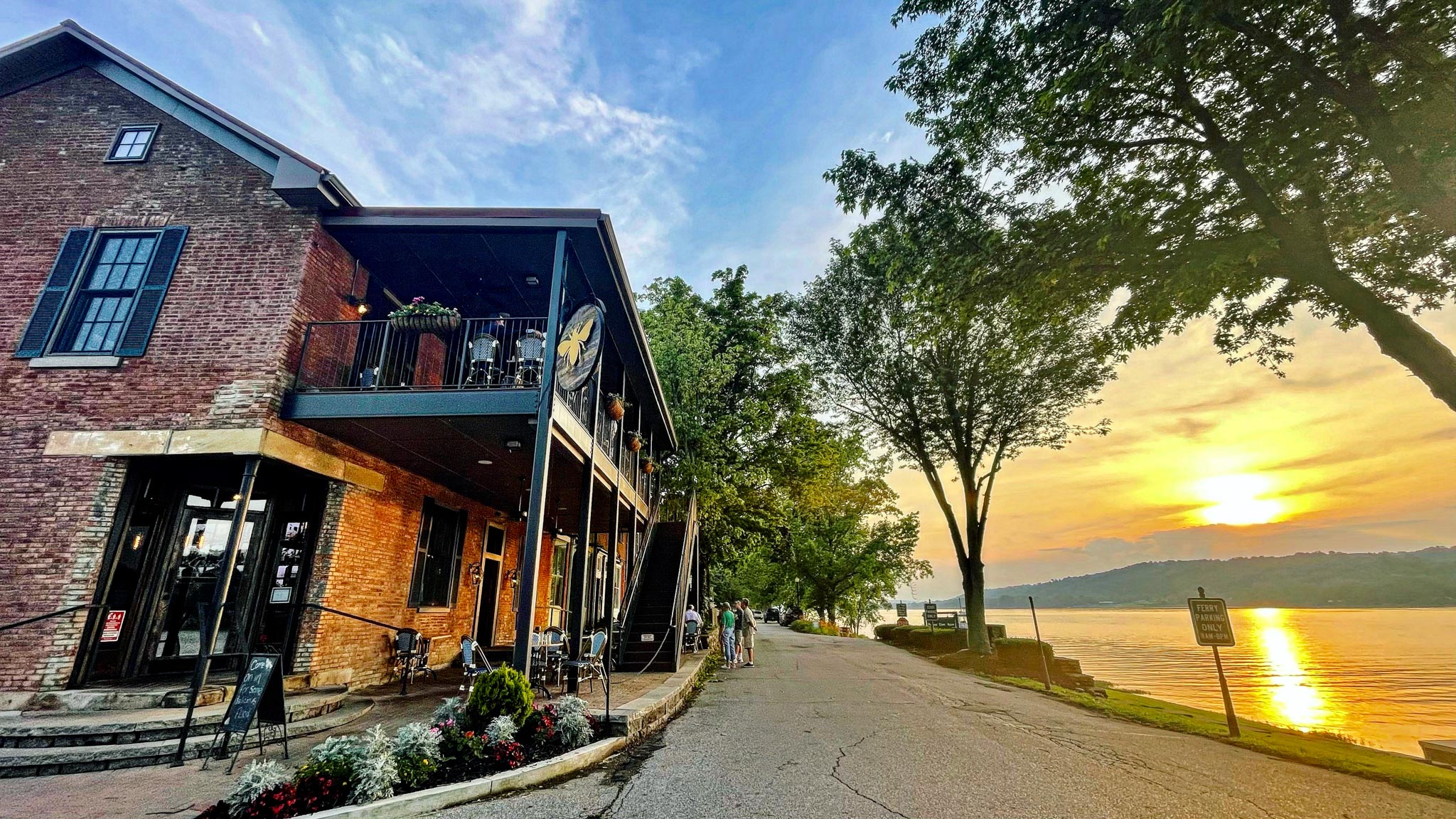 The Beehive Augusta Tavern sits along the Ohio River and has a deliciously diverse menu. Photo: Abby Rumpke

THE NORTHEAST KENTUCKY TOWNS of Augusta and Maysville occupy unique, yet shared spaces in terms of history, culture and geography. Nestled in sweet spots between the Appalachian foothills and the Ohio River, both towns are perhaps best known for their connections to famous people, like members of the Clooney family (Rosemary, George, Nick), and former Miss America Heather French Henry, along with University of Kentucky basketball greats Darius Miller and Deron Feldhaus.

While the cities celebrate their most well-known sons and daughters, both also offer visitors a connection to rich, distinct, even tactile histories that endure in well-preserved houses and buildings, and in the people and stories that flow through these river towns like water.

When the late Kentucky historian Thomas D. Clark created a list of Kentucky treasures, he listed 11 places of particular historical, cultural or ecological significance. Tellingly, Augusta is the only city on this list.

Stroll down Augusta’s Riverside Drive, for example, and you’ve got the Ohio River on one side and a row of historic homes listed on the National Register of Historic Places on the other. You can have dinner and watch the sunset over the river from the deck of the Beehive Augusta Tavern. This 1796 building has seen the town’s entire history, including the Battle of Augusta in 1862—when what is now the Beehive was set on fire—as well as the flood of 1937. The Beehive’s owners, Lance and Lalani Bates, bought and refurbished the place in 2017 and the restaurant now features a diverse menu with innovative and delicious items like spicy shrimp and grits and the Beehive honey pie.

About a one-minute walk east, you’ll find a historic home where two of the area’s most famous storylines intersect. “Rosemary Clooney was the second phone call I received after I won Miss America,” Augusta native French Henry says. The legendary singer and movie actress, who also called Augusta home, became a mentor to Henry, helping her deal with sudden fame.

After Clooney’s death in 2002, French Henry and her husband, former Kentucky Lt. Gov. Steve Henry, bought the house and eventually established it as a museum dedicated primarily to Rosemary Clooney’s life and her career. French Henry is a direct descendant of Augusta founder Phillip Buckner. Her devotion to the town is apparent not only in her investment in the house, but in the name of her youngest daughter: Taylor Augusta Henry.

French Henry sometimes serves as a tour guide at the house, which also displays some costumes and memorabilia from the career of Rosemary’s nephew, actor/director George Clooney (Augusta High School, class of ’79).

The Clooney family’s prominence in the area is unavoidable, and the Clooneys themselves seem to celebrate that connection as much as anyone else. George’s parents, Nick and Nina, have bought and refurbished several of the town’s historic buildings. Nina, in particular, talks about doing hands-on renovations with the familiarity of an HGTV host.

She also is the owner-operator of Nina’s, a shop on Main Street with an eclectic array of antiques, art and collectibles, many of which have a Hollywood theme. She likes to chat up visitors, warning them to be careful “on the mean streets of Augusta,” which is funny, because there aren’t that many streets, and they’re definitely not mean. Of her town, Nina says, “This is a welcoming place.”

“Welcoming” also applies to Maysville, just 19 miles east of Augusta on State Route 8. Maysville is bigger, with a population of about 8,800 (compared with about 1,200 in Augusta) and its downtown is separated from the river by a flood wall. Still, the area’s history feels alive and well-nurtured on the brick streets of downtown, where you can walk past some of the town’s 155 buildings that are listed on the National Register of Historic Places.

One of Maysville’s most historically significant buildings is the Bierbower House, which was once a safe house on the Underground Railroad. It now serves as home of the National Underground Railroad Museum and includes hidden spaces beneath the floorboards where once-enslaved people could take refuge on the treacherous journey to freedom.

Another gem, Old Washington, is a historic district in Maysville. The former city was Kentucky’s second largest during the settlement of America’s frontier during the late 1700s and early 1800s. Book a tour through the Washington Visitors Center.

Today’s visitors can also explore the area’s history, culture and people at the Kentucky Gateway Museum Center, which offers a robust range of exhibits as well as resources for historical and genealogical research. The center includes the Kathleen Savage Browning Miniatures collection, which features thousands of miniature replicas of a wide range of people, objects, and places, including a few Maysville buildings.

As it says on the Gateway Museum Center’s website, “Everyone who ever passed through this part of Kentucky or called it home left a story behind.” Maysville and Augusta convey a sense of belief in the value of owning and preserving those stories as well as helping residents and welcoming visitors who want to make new stories.

GRAHAM SHELBY loves to tell stories about Kentucky’s unique places, people, food and history. He lives in Louisville with his wife and sons, and frequently visits his family homeplace in Clay County.

August and Maysville have plenty to see. Here are a few highlights while you’re in the area:

Baker-Bird Winery and B. Bird Distillery

4465 Augusta/Chatham Road, Augusta (do not use GPS)