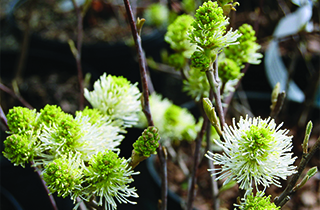 FOTHERGILLAS PREFER WELL-DRAINED SOIL, and when planted in a grouping, they may sucker and form a beautiful, dense mass. Most often, though, they are planted singly or in pairs. The flowers are 1 to 2 inches, white, and roundish or shaped like a bottlebrush. They emerge in spring just before the leaves. The heavily veined leaves turn a variety of vibrant colors in the fall. You may see red, purple, yellow, and orange leaves all on the same plant.

DWARF FOTHERGILLA IS THE MOST POPULAR of the species, with its vigorous cousin Fothergilla x intermedia ‘Mt Airy’ being the next most commonly available form. The blue forms like Blue Shadow are always harder to find.

Q: Something is eating the berries off my pyracantha bush during the night. I am fairly certain it is not deer, there are no tracks around the bush. What bird or animal will eat the berries? Normally the berries will last all winter for the catbirds to feed on.

A: There are several varieties of pyracantha (firethorn); they range in growth habit, but all are evergreen and produce various shades of bright yellow, orange-red berries. When it comes to food for animals, it is hard to say what is going to be eaten first during the colder months when food is less abundant. Depending on environmental conditions during the growing season, some favorites among birds and other animals may not have produced as well and so wildlife is forced to choose food that is otherwise saved for last.

I would also doubt that the deer are eating these highly ornamental berries, because they are considered deer-resistant. Nothing is deer-proof, but I would suspect birds to be the culprit. Pyracantha is a favorite among a variety of birds, including Northern mockingbirds and cedar waxwings.

Have a Gardening Question?
Ask the Gardener