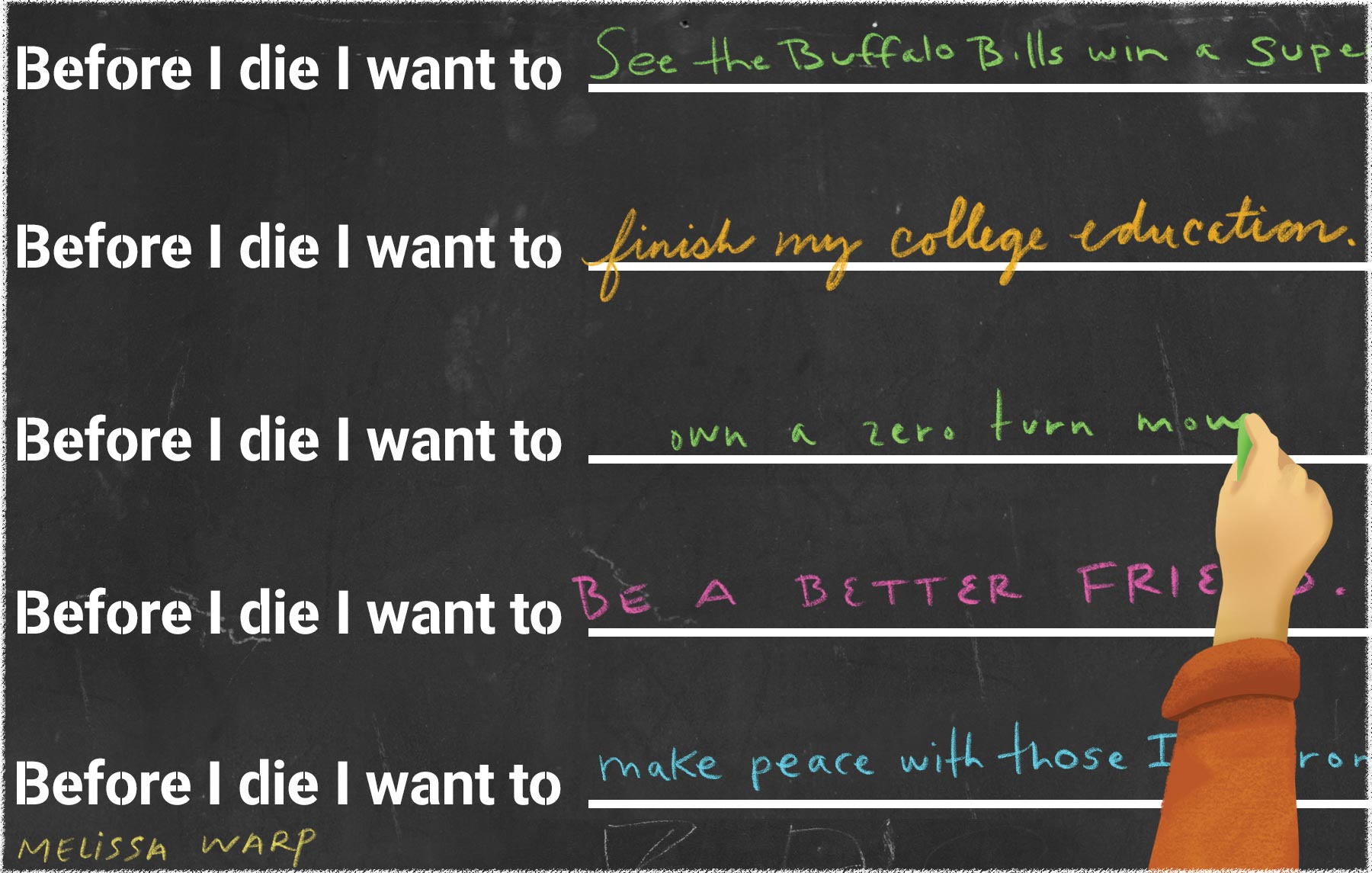 The words are hard to miss—“Before I die,” in 12-inch white letters atop two large blackboards on the façade of an antiques shop in the heart of Nelson County’s historic Bloomfield.

Beneath those words on each board are more than 40 lined spaces in which visitors are invited to complete the thought, “Before I die, I want to…” A chalk box is attached to each board.

From my first notice of the boards several years ago, there was little doubt they were the work of Linda Bruckheimer, a novelist, photographer, preservationist and entrepreneur who, along with her husband, Hollywood producer Jerry Bruckheimer, owns Walnut Groves Farms just north of town. Beyond her interest in antiques and primitives, she is also fond of curiosities, quirky objects and roadside whimsy.

She says she’d like to take credit for the “Before I die” project, but she saw the original in New Orleans years ago when local artist Candy Chang stenciled the words “Before I die…” on the wall of an abandoned house that she turned into a giant chalkboard in remembrance of the unfulfilled life of a friend who died unexpectedly.

Her desire was to encourage people to confront life and death, and to share their thoughts with others, Bruckheimer tells me. It became an unlikely catalyst that encouraged expression and uplifted the community. Copies of the wall were soon popping up in other places, and now number in the thousands.

When in the fall of 2013 Bruckheimer had the “Before I die…” boards installed in front of the antiques shop that bears the name of her paternal great-grandmother, Nettie Jarvis, she was unsure what type of response they might evoke.

“But within hours, both boards were full, and we were out of chalk!”

All these years later, people are still coming from near and far to add entries to the ever-changing list. One of the questions Bruckheimer is most often asked about Bloomfield is: “Is Bloomfield the town with the ‘Before I die…’ sign?”

Some visitors to the chalkboards list places they hope to travel; many want to see world peace or leave political statements. Some want to study a foreign language, lose weight or “marry the girl I saw in the parking lot at Walmart.” One even wanted “to marry Mrs. Bruckheimer!”

In the end, the overwhelming goal left in most messages is not the mountain they want to climb or the Cadillac they want to own, Bruckheimer says. They want to be a better wife, husband, parent, friend, person. “They want to serve God, and of course, there is winning the lottery,” she says.

When I stopped to look at the chalkboards a while back, a few of the entries that caught my eye were, “I want to make peace with all those I’ve hurt or wronged” and “I want to raise my family, be a role model father and own a zero turn mower.”

Then there was the wish, apparently left by a child: “I want to have a mommy.”