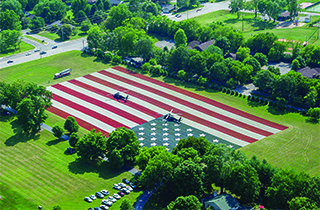 The year after the 2001 terrorist attacks on the United States, Bob and Doris Burr of Bowling Green wanted to do something to “show support” for their country. When the Fourth of July arrived, their support couldn’t be missed. The couple had a 5-acre flag painted on the land leading up to their home. In following years they not only painted the flag again but added a party with country music bands and fireworks. One year they even managed to have two Black Hawk helicopters land on the flag (shown here). After retiring, the Burrs no longer hold the huge parties but they are as patriotic as ever. “We believe in our country,” says Bob. “We believe in our constitution. We believe this is something real good to do to show our love for America.”