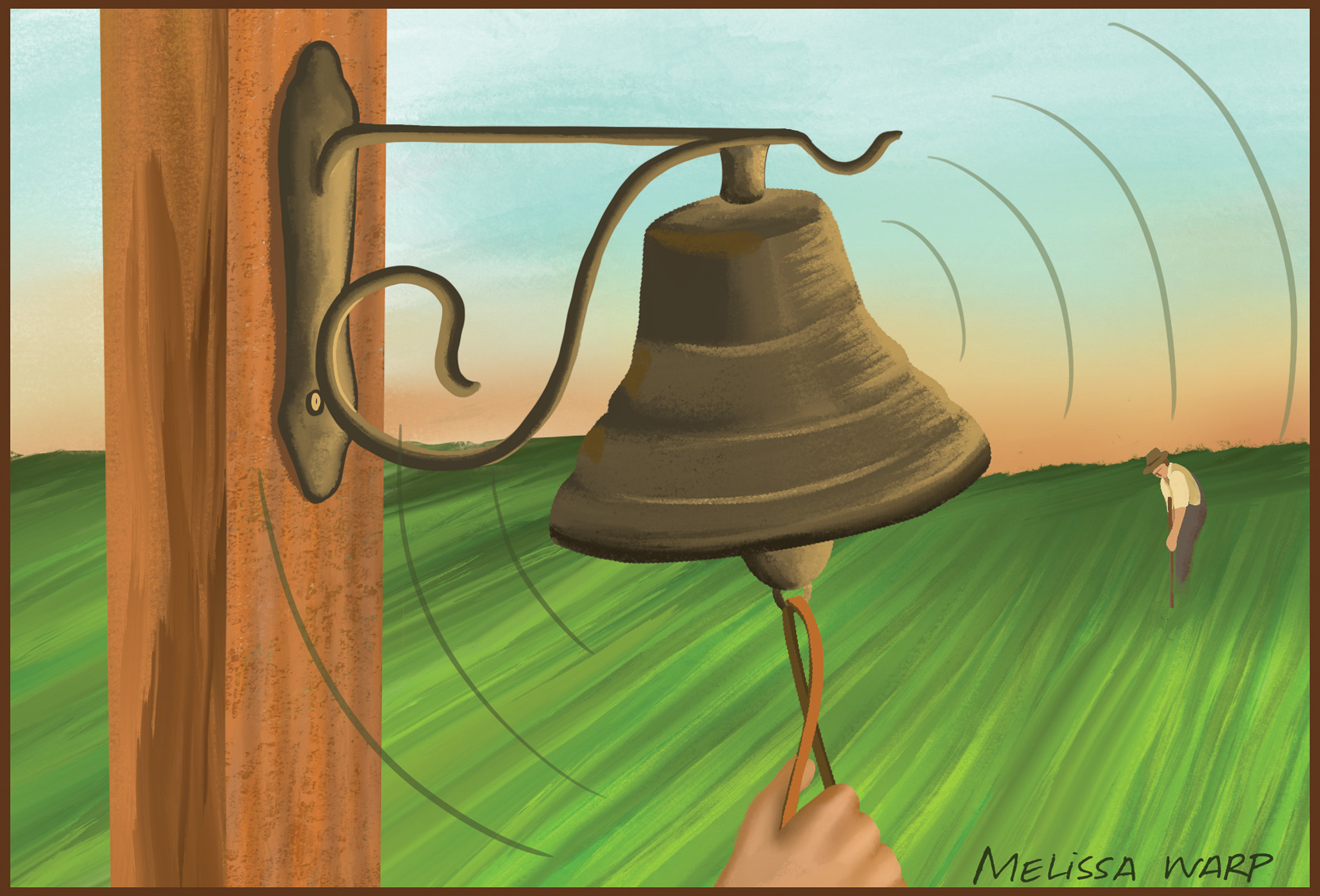 SURELY SOMEWHERE among the distant echoes in the great beyond, a dinner bell still rings.

Time was, in decades past, when many Kentucky farmyards had a dinner bell on a post near the house—used mostly to call workers from the fields at noon. Much farm work was still done quietly with horses and mules in those days, when a bell could still be heard. Old farmers have told how some mules would stop working and immediately head for the house when the dinner bell rang.

Before phone service reached many rural areas, neighbors in most communities knew the continued ringing of a dinner bell, at any hour other than noon or supper time, usually meant someone needed help.

The late Clorine Lawson of Barren County once told me her family frantically rang the dinner bell in 1910 when her aunt was choking on one of those picture buttons that were often used in political campaigns of that day. Neighbors came running to help, and her aunt coughed up the button before the doctor arrived.

Author and historian Todd Moberly of Madison County, a consumer-member of Blue Grass Energy, recalls his sixth-grade teacher telling about her grandmother’s small dog that was trained to pull the rope and ring a dinner bell that was anchored to a tree. When the grandmother fell and broke her hip, the little dog rang the bell and alerted the neighbors.

I remember a visit with reclusive Trimble County artist and writer Harlan Hubbard, when we met at Plowpoint Landing on the Indiana shore of the Ohio River. Across the river, at Payne Hollow, Harlan and his wife, Anna, led a solitary, back-to-nature existence in a remote homestead overlooking the Kentucky shoreline. There was a dinner bell to ring on the Indiana shore, and Harlan rowed his johnboat across the river to meet me.

James Riley of Marshall County, a consumer-member of West Kentucky RECC, says when he was a boy in the rural settlement of Sharpe, a neighbor who lived alone attached a lightweight rope about 50 feet long to her dinner bell, and ran it through a window to sound the alarm if she needed help.

The late Mary Lee of McCreary County said years ago that, as children, she and her siblings were told to ring the dinner bell to alert her father, a beekeeper, when the bees were swarming.

Television journalist Charles Kuralt, who hitchhiked through Kentucky as a teenager and later returned numerous times to film his popular “On The Road” segments for the CBS Evening News, included in an audio collection a memory of the old bell on a post in the yard of his maternal grandparents’ farmhouse in rural North Carolina. The grandfather continued a tradition begun by his father of ringing the bell every Christmas Eve to invite anyone nearby to have dinner with the family.

I’m thinking we could use a few more dinner bells these days.