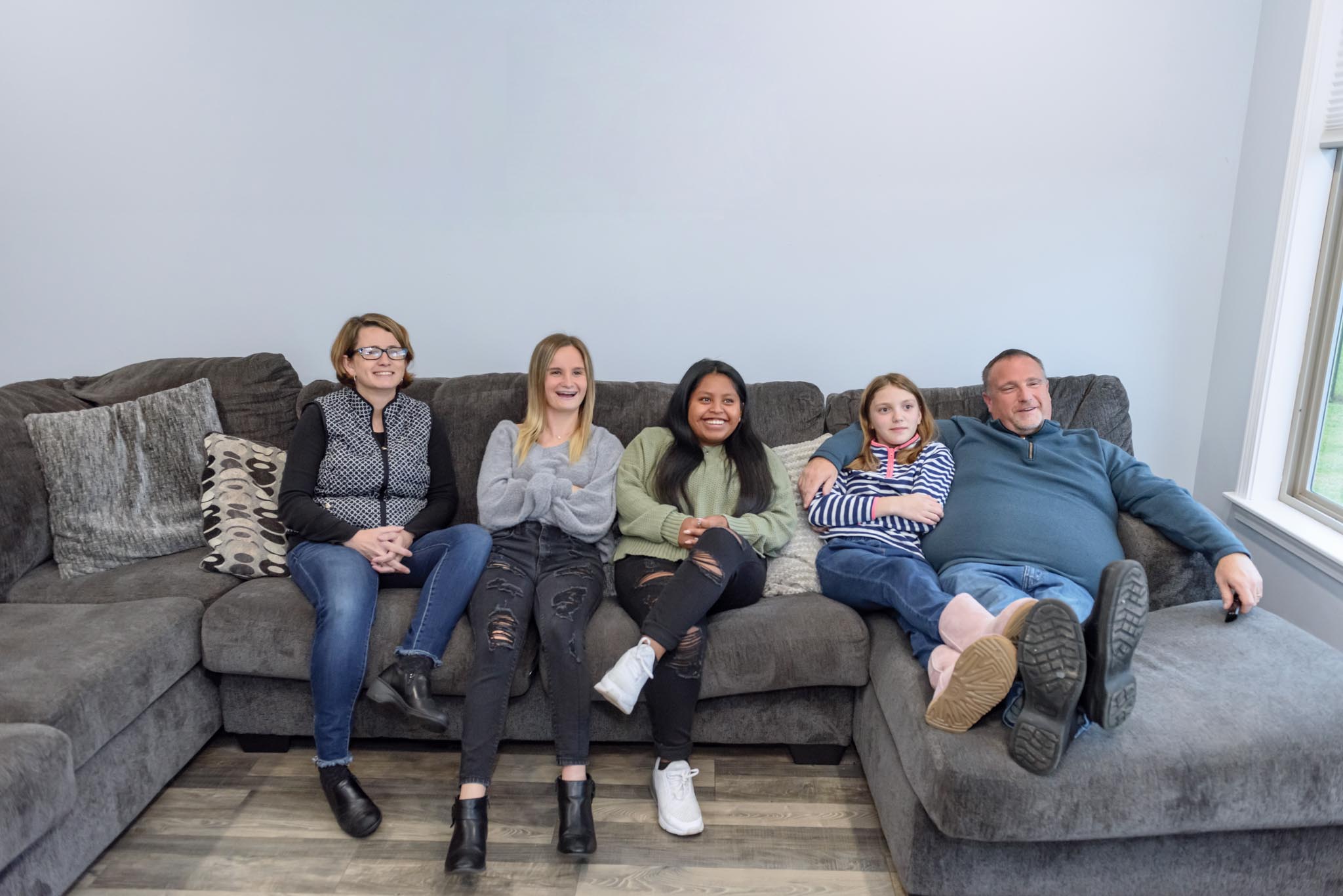 Bookending their daughters, Angela and Sean Bischoff are longtime parents and foster parents. Their daughters are, from left, Brooke, 16; Allie, 17; and Kayla, 10. Photo: Brian Bohannon

Several facts about foster care might surprise the average Kentuckian—for instance, that there are nearly 10,000 Kentucky kids in foster care in 2021, or that the basic per day support for children ages birth–11 is $24.10.

But if foster mom Angela Bischoff of Shepherdsville could raise awareness about just one facet of foster care in Kentucky, it might be this: everyone has a role to play.

Bischoff ought to know. A Salt River Electric consumer-member, she and her husband, Sean, have fostered multiple kids. They are currently raising four children, including one adopted from foster care. In addition to caring for her family and working full time, Bischoff started a nonprofit, Hope’s Closet, which enables foster families to shop, free, for items including clothing, books, toiletries, car seats, diapers, wipes and more.

With 9,109 kids in foster care statewide as of October, the sheer need may seem overwhelming. But foster parents like Bischoff say just one person can make a lasting difference in a child’s life.

“It’s all about making sure the kids are able to have a stable, loving home while they’re unable to be with their family,” Bischoff says. “We have to make sure we pour our heart and soul into the kiddos who will be our future.”

Children might be removed from their home for a variety of reasons, but most have experienced abuse or neglect, according to the Kentucky Cabinet for Health and Family Services (CHFS), the state agency that oversees foster care.

The goal of foster care, in most cases, is for the child to be reunified with his or her family. According to CHFS, about three-quarters of kids in foster care do return to their families. If a judge terminates parental rights, however, the child then becomes eligible for adoption. The Bischoffs have experienced multiple facets of foster care and adoption, with one child adopted internationally from Guatemala, one born biologically and one adopted from foster care, as well as a current foster placement.

The Bischoffs have fostered periodically since 2003. Angela says they’re motivated by the “huge need,” as well as the pressing sense that, if parents like them don’t open their homes, kids will have nowhere to go. But in addition to serving a need, Bischoff says her whole family, including the kids, have reaped rewards from fostering.

From foster child to trainer

As a former foster youth, Ian Rosser of Lexington also understands foster care from multiple angles. Drawing on his experience of 13 years in care, Rosser now helps train foster and adoptive families through the Training Resource Center at Murray State University. He’s also passionate about working with youth and helping them break free from some of mental habits he experienced.

“When you’re in care, I feel like it’s a lot of survival mode only,” he says. “That’s only part of the equation. Where I’m going to get food tomorrow? Where am I going to sleep at? Where am I going for Thanksgiving? But there also needs to be a transition that happens at some point, where I think about where do I want to be? What do I want to contribute to world? What legacy do I want to leave for my kids?”

In addition to his work with foster parents and teens, Rosser is building a music career as a hip-hop artist. Under the performance name Miraage, Rosser has released several singles and a full album, Odd, which are available on streaming services like Spotify and Apple Music.

Rosser says his success as an adult is due in large part to the support and permanency he gained from a foster mom, as well as close relationships with social workers and a pastor/mentor.

He describes Marjorie Blakey, known to her foster kids as “Ms. Marge,” as a tough, loving, understanding presence who gave kids the space they needed.

“Her parenting style was to let me get acclimated to my environment,” he says. “It seems like common sense but a lot of people don’t do that. You’re thrown in and you’ve got to catch up.”

Rosser came to live with Blakey in early high school and stayed with her until he went to college. In Blakey’s Danville home, Rosser says, there weren’t 100 rules to follow. There were only three or four, and the key to them all was respect. Kids were expected to respect the house, Ms. Marge, one another and themselves.

“I look at those as my formative years,” Rosser says. That was really when I was becoming who I was going to be as an adult. I’m thankful, looking back, that I had stability during that piece of my time. That was critical. I still had very rough moments in college. But at the very least, I had some foundation being in Ms. Marge’s home.”

Growing into the role

When foster parents Daniel and Sarina Stone of Richmond began their journey, Daniel wasn’t sure how well he would connect with the kids. He assumed that fostering would be “Sarina’s thing” and that work would keep him too busy to be involved. Today, he says he’s glad he was wrong on both counts.

“I’ve grown in that I’m a dad,” Daniel says. “It’s great to have children in the house, and I love them unconditionally. I love it. I wouldn’t change it for the world.”

For Sarina, fostering is a redemptive journey. Like Rosser, she spent time in foster care as a child—a total of 18 months—before being reunified with her mom. Stone’s placement, which was in Indiana, was not a positive experience. In some ways, that formed her desire to become a foster parent herself, and to offer what she wishes she could have had. At the same time, it forced her to deal with her own past trauma.

“I don’t think you realize how much unresolved trauma you have until you go to redeem that trauma,” Sarina says. “We’re listening to stories about how to help traumatized kids, and I’m sitting there thinking, ‘I know.’”

Sarina says she spent six months “persevering and muddling through,” relying on counseling and conversations with her mother to better understand her childhood experience and to gain healing. “I don’t think I would have been able to mother children the way I can if I had not done that first,” she says.

Now, having fostered since 2016, the Stones encourage anyone who’s interested in fostering to sign up for an informational class through CHFS’s website for the Kentucky Foster Adoptive Caregiver Exchange System, KYFaces.ky.gov. Classes are free, zero-obligation and provide a great way to begin thinking about foster care. Even those who don’t feel able to foster can find ways to help, Sarina says.

“Everybody can do something,” she says. “It’s such an overwhelmed system, and there are so many facets. You can babysit for foster parents. You can bring them meals, help them on court days. There is so much you can do in general that doesn’t directly involve working with kids.”

Bischoff, the Hope’s Closet co-founder, encourages potential foster parents to look at the facts, make an informed decision and take a leap of faith.

“It can feel scary, and you can have a fear of getting attached, but it’s OK,” she says. “You can be there for kiddos for a moment in time. And that moment in time that you’ve had them in your life could make a lasting memory. Don’t be afraid.”

To meet the needs of children placed in their home, foster parents receive:

Pieper and her husband, James Pieper, are among those doing something. They began fostering in 2004, initially focusing on teenagers and later specializing in infants who were going through withdrawal symptoms. Currently, in addition to raising three kids adopted from care—Samuel, 15, Savannah, 14, and Christian, 9—Pieper leads a team of five as a mentor for foster parents through The Kentucky Foster & Adoptive Parent Training Support Network, a statewide support organization made up of 15 regional teams.

If everyone can foster care, as Piper says, it’s due to organizations like The Network, which help connect the dots between the need and those who want to do something about it.

“The Network team tries really hard to be there,” Pieper says. “The first six months that you’re a foster parent, you get a mentor assigned to you. I work as a mentor, and I hope that I’m helpful—I know our mentor was for us.”

The best place to start, Pieper says, is by reaching out to The Network or visiting the Kentucky Foster Adoptive Caregiver Exchange System.

“Talk to foster parents in area, and attend an informational meeting,” she says. “The Network team can tell when and where those are. A lot can be done online because of COVID. But the first thing you need to do is just find answers to your questions and jump in feet first.”

For potential foster parents who are interested, but don’t know if they can do it, Piper offers encouragement: “You’ll never regret it a day in your life,” she says. “It’s just a beautiful thing to really look into the heart of a child, and know you’ve made an impact and made a difference. It will change you in all the ways it should.”