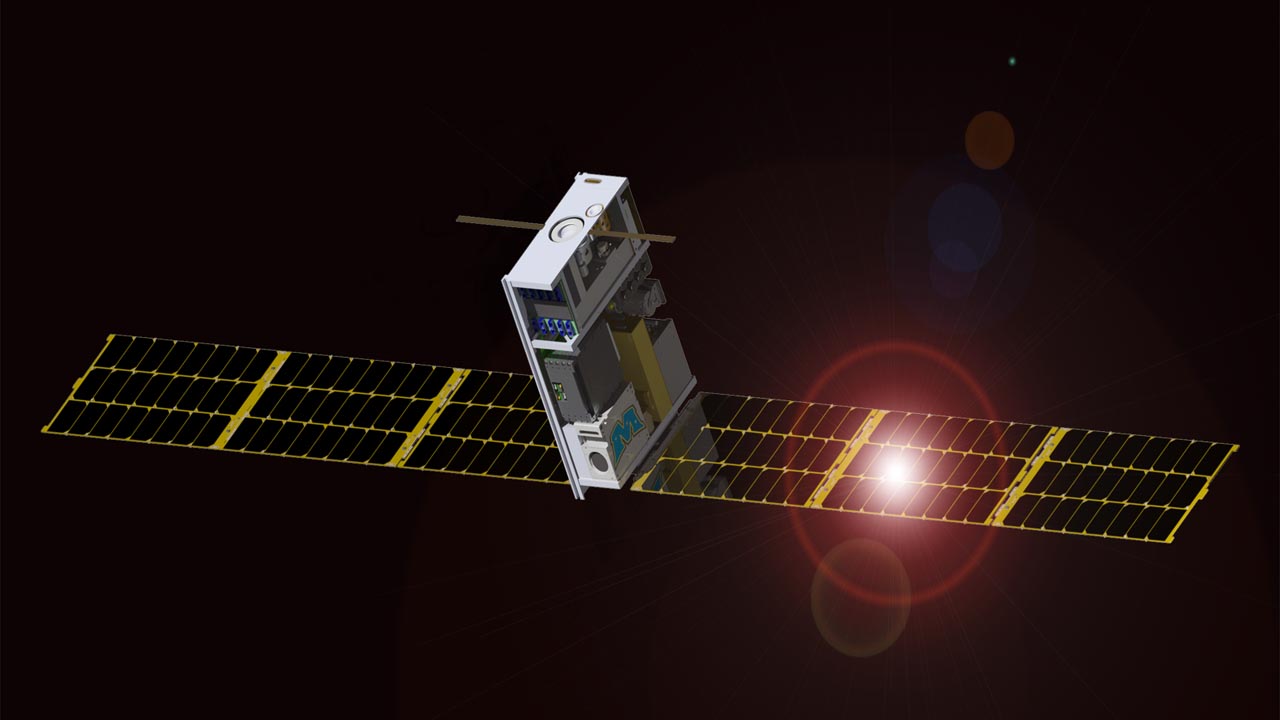 Lunar IceCube is a lunar-orbit satellite designed to prospect for water, ice and other volatiles from lunar orbit. The mission, led by Morehead State partnering with NASA’s Advanced Exploration Systems, NASA Goddard Spaceflight Center, JPL and the Busek Company, will fly on the Artemis 1 mission that will launch this year. Illustration: Michael Combs and Benjamin Malphrus/Morehead State University

It is a spacecraft the size of your carry-on and it’s going to help people live on Mars. Eventually.

Right now, it is making history as one of the ride-along payloads on NASA’s newest rocket—the Space Launch System (SLS).

The Lunar IceCube spacecraft, developed and built at Morehead State University’s (MSU) Space Science Center by a team of scientists and students under the direction of Benjamin Malphrus and lead engineer Nathan Fite, is one of these small satellites that will hitch a ride on the SLS. The Lunar IceCube is funded through a $24 million program NASA awarded the university in 2016.

Malphrus is the executive director of the Space Science Center and MSU professor of space science as well as the project director for MSU’s 21-meter ground station antenna—the first non-NASA affiliated node on the NASA Deep Space Network: Deep Space Station 17, along with Jeff Kruth, the lead systems engineer.

The small, complex interplanetary spacecraft was delivered by MSU last year to NASA’s Kennedy Space Center in Florida and is set to launch in March or April on the maiden voyage of the SLS, as part of NASA’s Artemis Space Program. (Think Apollo for the 21st century.) When SLS takes off, it will be the most powerful rocket launched in the history of the space program.

To infinity and beyond

IceCube’s mission, which will last about 18 months and encompass hundreds of orbits of the moon, will be operated directly from the foothills of the Daniel Boone National Forest in Rowan County, from the Mission Operations Center in the Space Science Center. According to the university, the team will use Deep Space Station 17 to send commands to the spacecraft and transmit information. The goal: To investigate where the water is on the moon and learn how it can be extracted and turned into usable forms.

“The United States hasn’t been back to the moon since the early 1970s,” says Malphrus. “When we go back, we’re going to stay, build outposts, set up science stations, learn how to live in that environment and then go on to Mars.”

The return to the moon comes with a different set of goals than those of the early space missions. That’s where Lunar IceCube enters the picture.

“To achieve our goals, we need infrastructure,” says Malphrus. “Lunar IceCube is part of a group of small spacecraft that are scouts to look and see what useful material is on the moon and help NASA understand how resources like water, an extraordinarily valuable material, can be used on the moon.

“The idea is that if we want to explore the solar system, we can’t take everything with us; we have to live off the land to the extent we can. The Lunar IceCube scouting mission is a steppingstone to Mars.”

The Bachelor of Science in Space Systems Engineering is MSU’s Program of Distinction, one of only five such programs in the nation.

“It’s not just a bunch of faculty members designing and building space projects,” says Malphrus. “Our students have worked on these missions, undergrads included. There are 20-year-olds—students from Kentucky—who will have their fingerprints in space and soon, have hardware on the moon.”

Says Morehead State University President Joseph (Jay) Morgan: “I’m not a space scientist, but when I think of space science development, I think of Florida, Alabama and California, and it gives me a lot of pride to know our university and our state have the expertise and brain power and energy to produce something just as well as—maybe even better than—other states we think of as burgeoning space development locations.”

Having the Space Science Center at MSU represents economic development not only for the region but for the entire state. The aerospace industry is hugely important in Kentucky. According to the Kentucky Cabinet for Economic Development, it is a $14 billion industry here, one that has outpaced the automotive industry. In fact, in 2016, aerospace became the No. 1 manufactured export in Kentucky.

“We don’t have a big anchor company, but 600 small companies across the state that make a $14 billion industry,” says Malphrus. “We make landing gear for airplanes, valves and gaskets for rockets, small satellites, extruded aluminum and more.”

Even beyond its economic and educational significance to Kentucky, the IceCube is important for the groundbreaking work it represents and the accompanying prestige it brings to the state.

“When the Lunar IceCube launches, our hope is that the publicity will point an arrow back to Kentucky and really be seen in a positive light,” says Morgan. “It makes me proud to be a Kentuckian.”