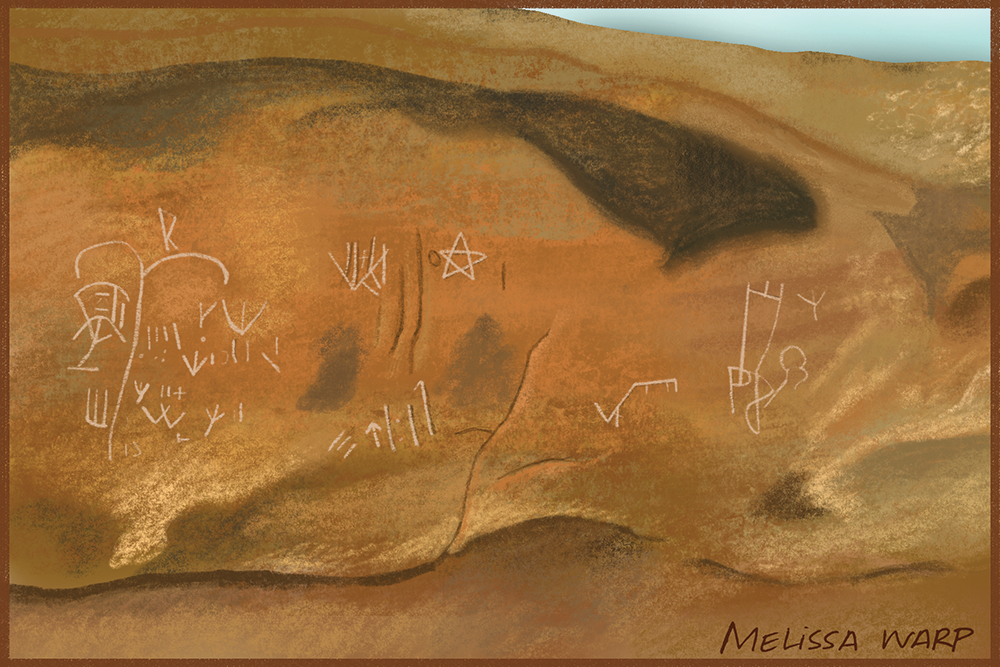 Hidden among the cliffs, rock shelters and caves of Kentucky are mysterious chapters of lost history, chiseled in stone.

The “Red Bird Stone,” a boulder estimated to weigh 25 tons or more, is among the most visible examples. It tumbled from a sandstone cliff near the Red Bird River onto state Route 66 in Clay County in 1994, and now rests under an open-air shelter in the city park of Manchester, the Clay County seat.

On its face are many markings, or petroglyphs, believed to have been left by ancient visitors whose origins continue to puzzle researchers.

Archeologists from the University of Kentucky and University of Tennessee are generally in agreement that the inscriptions—consisting largely of linear grooves—appear to be ancient Native American in origin. Still another theory by some is that the markings were the work of later native tribes during the period when the Cherokee, Shawnee and others are known to have had a presence in the region.

However, Jan Simec, a University of Tennessee archeologist who has studied numerous Cherokee sites, doesn’t believe the Red Bird Stone petroglyphs were left by Cherokee or other tribes. And Simec further dismisses theories that inscriptions on the Red Bird Stone and strange markings at other sites around the region were the work of ancient explorers who ventured across the Atlantic before Columbus.

But James Burchell of the Clay County Historical Society, who, along with former Clay County Judge-Executive James Garrison, is credited with saving the Red Bird Stone from destruction, insists that the stone contains several Old World scripts, including ancient Hebrew and Greek.

Burchell, a member of Jackson Energy Cooperative, has been familiar with the markings most of his life, and had always assumed they were Native American. But two years before the 18-foot long boulder dropped from the cliff, he sent detailed photos and descriptions of its markings to Barry Fell of Harvard University, an internationally prominent invertebrate zoologist, renowned epigrapher and author on ancient life in America.

Burchell has a letter from Fell verifying Old World inscriptions on the Red Bird Stone, accompanied by an ancient alphabet matching some of the cryptic carvings.

Fell, who died in 1994, was widely criticized by professional archeologists and anthropologists who complained that his research failed to meet their standards, but he gained immense public popularity during the 1970s and ’80s with his first book, America B.C., and two sequels. He theorized that Celts, Egyptians, Phoenicians and other Old World explorers found their way to North America untold centuries before Columbus, and that, when deciphered, many of the mysterious marks on rocks such as the Red Bird Stone, provide solid evidence of their presence.

Burchell is convinced that some of those ancient explorers, following rivers and streams from the Gulf to the Great Lakes, stopped to leave what they hoped would be a lasting record of their passing, etched among the cliffs and caves, and on the giant boulder that we now call the Red Bird Stone.