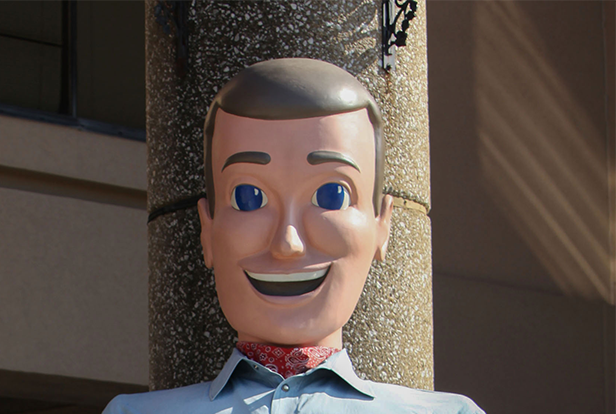 Freddy Farmer is celebrating 60 years at the Fair. Click his picture to get the story. Photo: Kentucky Farm Bureau

“Meet me in front of Freddy” is often the plan for the meeting place of fairgoers at the Kentucky State Fair. He’s hard to miss!

He is 18 feet tall and wears a size 31 shoe. When he sits he is 13 feet tall. His job as the official greeter is to welcome visitors—especially children—and act as the ambassador for our farmers and our agriculture industry. (How long is Freddy’s nose? Click here to find out)

This makes the 60th year for Freddy Farm Bureau to sit on bales of straw in front of Freedom Hall and say “Welcome to the Kentucky State Fair.”

It wouldn’t be the state fair if you didn’t go by to visit with Freddy. He has become a goodwill ambassador at the Kentucky State Fair, greeting fairgoers for more than three generations, informing them of the many activities to see, and events in which to participate, but most of all to provide a friendly ‘howdy’ to all who pass his way.

Freddy gets a kick out of all the questions posed to him. He carries on conversations and answers all sorts of questions. Many fairgoers try to stump Freddy with their questions, but he has a high IQ and great sense of humor.

Freddy specifically enjoys talking about agriculture. It is one of the foundations of the fair and each year thousands of people come to show their animals, exhibit their crops, or participate in ag-related events.

Agriculture is as much of a tradition at the fair as is Freddy, and his goal is to help people understand the importance it plays in our everyday lives.

Since Freddy first arrived at the fair in 1958, he has not missed a single minute of a single day of interacting with the millions of attendees who have made the Kentucky State Fair a family tradition.

When not at the state fair, Freddy Farm Bureau stays at the Kentucky Farm Bureau headquarters located at 9201 Bunsen Parkway in Louisville, Kentucky.