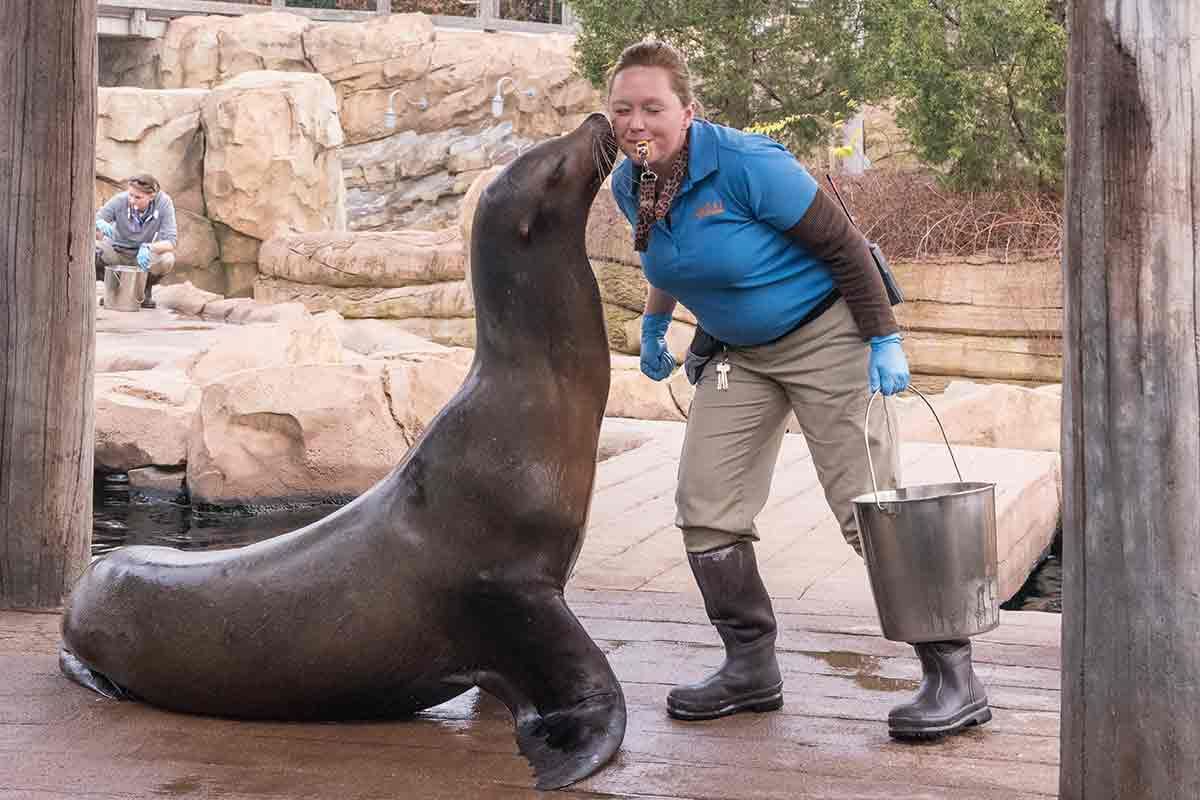 Choosing a college major can seem daunting. After all, it’s an important first step in charting a potential career path after college.

We quizzed students and faculty at several Kentucky colleges and universities for advice on how to make the college major selection process as stress-free as possible.
Keep these tips in mind to find the college degree program that’s the perfect match for you.

1. Free yourself to explore
Students sometimes enter college feeling pressured to have their major figured out from day one. But it’s important not to have blinders on when exploring the many major options available at a college or university. “We like for students to view those first few semesters of college as an exploratory time, rather than feeling like they have to pick a major within the first few weeks on campus,” says Dr. James Breslin, dean of student success at Bellarmine University in Louisville. “Students should have time to explore what is the best fit for them: what’s going to meet their interests, help them achieve their career goals, and ultimately get them to a place where they can make the type of impact on the world that they want to make.”

Breslin advises students to make the most of their required undergraduate studies/general elective courses by selecting from among science, humanities, or social sciences courses with subject titles that speak to their interests. Those courses could open the door to an area of study they hadn’t considered before, and wind up being the perfect fit.

“Students should have the opportunity to do some exploring, including taking a variety of courses and perhaps arranging for job shadowing or setting up some volunteer work in an area to see if it’s something they’d want to do professionally,” agrees Octavia Lawrence, director of academic advising at West Kentucky Community and Technical College in Paducah.

2. Investigate the unexpected
Students also can fall victim to pressure to default to a common, well-respected degree path—going prelaw or premed, for example, because their parents are lawyers or doctors, or because that’s what most of their friends are doing. Before settling on a major, students should allow themselves the freedom to investigate degree options that might be a bit more off the beaten path. Taking the time to explore the college or university’s course catalog page by page might turn up some surprising degree options. For instance, Owensboro’s Kentucky Wesleyan College is one of the few colleges in Kentucky that offer an undergraduate degree in zoology.

Stephanie Green, of Louisville, graduated in 2010 with a degree in zoology from Kentucky Wesleyan, which helped her turn a passion into a career. “Before attending college, I had volunteered at the Louisville Zoo for many years, and during that time, I developed an incredible passion for animals,” Green says. “I knew that working with animals needed to be my career. I knew that having a degree in zoology would give me that opportunity.”

Green has now been a keeper at the Louisville Zoo for almost six years. She started as a seasonal and part-time keeper with gorillas, then became a nightkeeper until August 2013 when she was promoted to a keeper II position in Glacier Run, where she currently works.

“At Kentucky Wesleyan, I had to do many research presentations for my colleagues and professors, which gave me the confidence to present information about our animals to the guests that visit our zoo every day,” Green says. “I feel that my professors at Kentucky Wesleyan were exceptionally knowledgeable in everything that I needed to know to succeed as a zookeeper.”

Dr. Shannon Finerty, Kentucky Wesleyan’s zoology program coordinator, explains, “Our classes are a little more specialized (than a traditional biology degree program) and are designed to specifically equip students for careers in a zoo or in a nonprofit animal rescue center.”

Iowa native and college junior Darian Reese has her heart set on working as a zookeeper one day, so Kentucky Wesleyan’s zoology degree program has been a perfect fit. “I discovered Kentucky Wesleyan while in high school during an online search for smaller colleges that offered a zoology major. I came here on a campus visit, and I fell in love with it,” Reese says.

3. Do some personal reflection
When Franeisha Jones, assistant director at Bellarmine University’s Career Development Center, helps students narrow their choice of major, she starts with a conversation. “It’s important to ask a lot of open-ended questions. If you think you want to major in biology, ask yourself why,” Jones says.

Students should also reflect on and write down what’s important to them in a career, Jones advises, starting, for example, by prioritizing a list of values from most to least important. These might include having an in-demand career, high pay rate, work/life balance, flexible hours, career mobility, ability to work from home, opportunity to help others, and a job they’re passionate about. If helping others ranks as a top priority, research fields that are associated with helping people.
Finally, students should take an honest look at themselves to evaluate and take note of their skill sets, including both their strengths and their weaknesses, Jones says. After all, if college calculus feels like torture, then a field that’s highly math-based, like physics, may not be the right major.

4. Talk to professors and others in your fields of interest
Don’t hesitate to ask questions about potential majors, advises Jennifer Furkin at Lindsey Wilson College in Columbia. She is co-director of the First Year Experience program, which offers assistance to help first-year students succeed in college. “We want to give students ownership of their academics. We want them to see the full picture, that this is their decision, but (to also know) that there are people that they can go to on campus for help,” Furkin says.

If students are interested in a particular major, they should make a point to go to that department and pick professors’ brains about job opportunities in that area. Also, career services offices can often put students in contact with alumni in various fields, so that students can interview them by phone about their jobs—or in some cases even job shadow—to see if a particular major and career may be a good fit.

5. Listen to your instincts
You’ll feel it when a major is a good fit—or isn’t. So trust that instinct. As a little girl, Bellarmine junior Olivia Russell of Louisville used to pretend to be a sports broadcaster by calling the action of games on TV, so her decision to major in communications with an emphasis on sports broadcasting feels almost instinctive, like what she was destined to do, she says.

Sometimes, though, students have to work their way through a few misses before finding a major that fits. Kentucky Wesleyan junior Jennifer Walker-Crawford, an Indiana native, initially took some biology courses, but knew after just one semester that the major wasn’t for her. She took some time to talk to faculty she respected, including Kentucky Wesleyan College President Barton Darrell, about different career options and has settled on accounting as her field of choice.

It’s a decision she couldn’t feel better about: “There’s a difference in the feeling that you get, when you’re (not in the right major and) just going through the motions and you’re not invested in it,” Walker-Crawford says. Now that she’s found her major match in accounting, she has “a sense that what I’m doing is going to help me so much in the future that it doesn’t feel like school work. It feels more like preparation for a professional career,” she says.

Four-year degree not for you? Train in a field that’s in demand

No one wants to choose a major only to find out there are no jobs in that field after graduation day. Students can investigate potential demand for various careers, including potential growth rate and number of projected new jobs, using the Bureau of Labor Statistics’ Occupational Outlook Handbook online at www.bls.gov/ooh.

For students who are eager to enter the job market and know that a four-year degree is not for them, it’s especially important to seek out career training in a high-demand field. They should look for programs like the innovative Technology Training Center at Campbellsville University, which offers certification programs in cosmetology as well as allied health fields, including medical assistant, state registered nurse aide, pharmacy technician, and phlebotomy technician—all fields that can lead to well-paying jobs right away. “We have had wonderful success in students gaining employment following their class and clinical training,” says Carol Sullivan, the Technology Training Center’s director.

“With certification in any track in the medical field, you have a good chance of finding a job,” says Christie Minor, who coordinates its allied health programs. “Right now, nurse aide positions are the most in demand. In the past week alone, three facilities have contacted me to let me know about their nurse aide vacancies.”

The Kentucky Community and Technical College System’s Kentucky FAME (Federation for Advanced Manufacturing Education) program is ideal for students hoping to receive certification in skilled maintenance jobs that are especially in demand across Kentucky’s manufacturing sector. The program is available at KCTCS locations in Lexington, Louisville, Florence, Somerset, Owensboro, and Elizabethtown, with plans to expand to other campuses.

Students apply to the employer-led, employer-driven program, in which KCTCS partners with manufacturers across the state, including Toyota, General Electric, and 3M. Employers select, screen, and interview students who, if accepted, work for them three days a week while attending classes two days a week for five consecutive semesters. Students receive paid, on-the-job experience that complements their classes, allowing them to complete their associate degree in applied science in industrial maintenance technology potentially debt-free, says Dr. Dianne Leveridge, director of technical programs for KCTCS.

The main goal of this Employer-Education Partnership (EEP), she adds, is “to build a talent pipeline that will feed a career pathway within these companies. These students are sponsored by the employer and are given an opportunity to stay at that employer and start their career after they graduate,” Leveridge says. They expect more than 80 employers to be actively sponsoring students by fall 2016. More information is available at www.kyfame.com.

Additionally, at all of its 16 colleges across the state, KCTCS offers technical training programs for many in-demand careers, including welding, construction, machining, and electrical technology. “If people can learn some welding skills, they get a job. There’s a huge demand for welders everywhere, not just in Kentucky but nationally,” Leveridge says. “And machining is the same way.”

Career Cruising
Students who have attended a Kentucky public middle or high school are likely familiar with annual required Individual Learning Plans, or ILPs, through their schools, which give them access to the online college major and career database at CareerCruising.com. The site enables both students and parents to conduct in-depth online investigations of an amazing array of college majors and potential career paths, based on a student’s interests and skill sets. Kentucky public school students in grades 6-12 and their parents can receive access codes to the site via their school’s counseling office.

There are many other informative, easy-to-use online career exploration tools aimed at helping students narrow their college major choice.
Here are a few to check out:
• College majors 101
• My majors
• Big future

Additional sites that allow for career exploration and/or detail up-and-coming or in-demand professions include:
• Bureau of Labor Statistics Occupational Outlook Handbook
• Big future
• Inside jobs
• Career one stop
• My next move