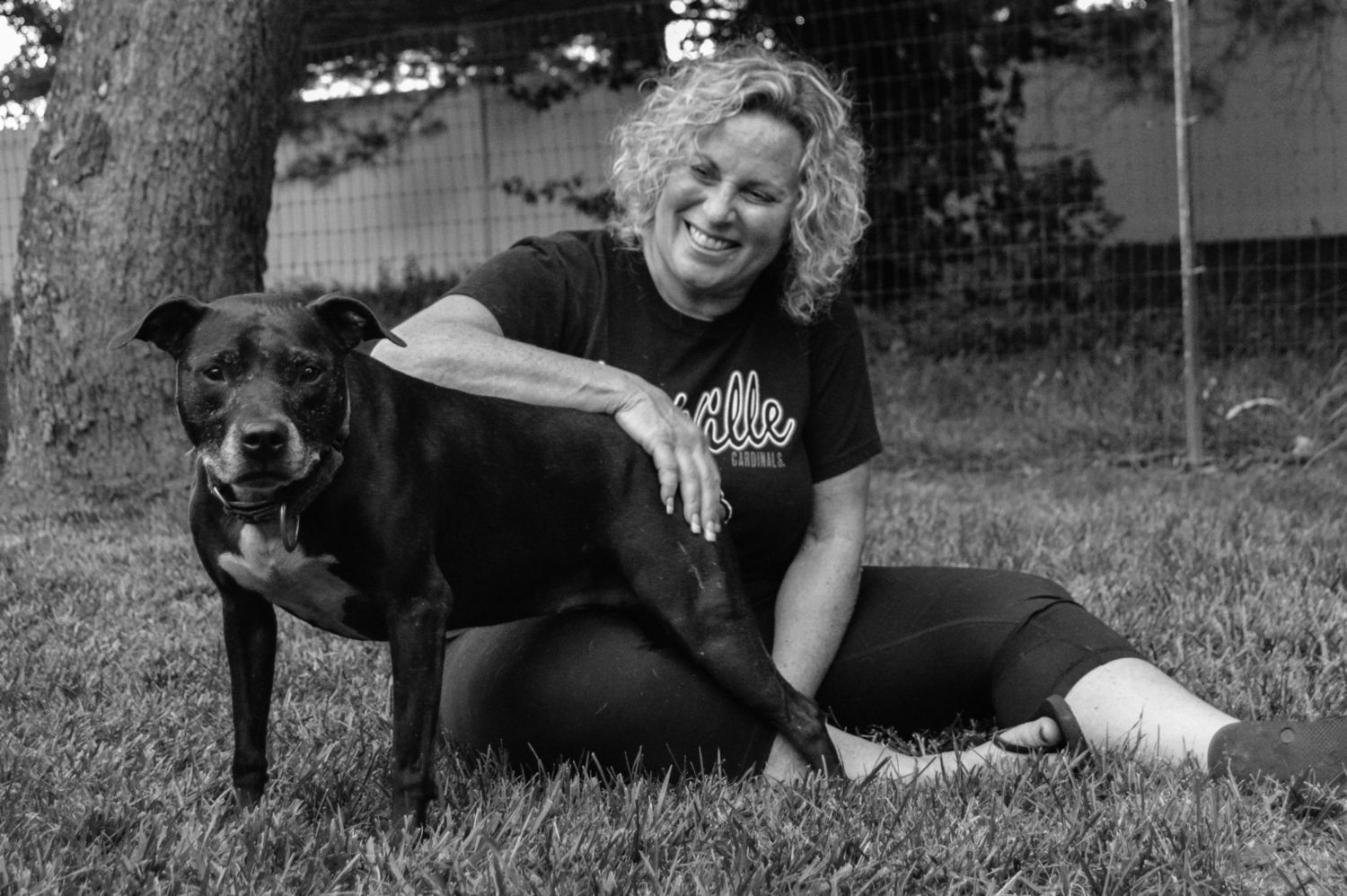 “I’d never seen such ugliness before.”

Animal rescuer and Louisville resident Shelly Phillips-Wright makes this blunt statement about the “Missouri 500,” a dog-fighting raid that happened in July 2009. It was the largest dog-fighting raid to occur in the U.S., involving multiple states, various law enforcement agencies, numerous shelters, and 500 rescued dogs. As a volunteer with the Humane Society of the United States (HSUS), Shelly was deployed to St. Louis as part of this raid to help with these dogs; it was her first dog-fighting case.

The last Creature Comforts column covered the long-awaited passing of a dog-fighting bill in Kentucky. Having been on the “front lines,” Shelly knows firsthand what is done to fighting dogs—now, with the bill passed, raids like the one in Missouri are more likely in Kentucky. Shelly has helped in raids in numerous states since 2009, and will no doubt be part of any Kentucky raids.

The Missouri 500 raid was two years in the making: investigations by federal and local law enforcement were conducted before raids in eight states took place at the same time. Shelly says she had no clue what was about to happen when she was deployed.

“You never know what you might be getting into: HSUS simply tells you you’re needed. I don’t even know where I’m going until I’m given my plane or car reservation right before I’m due to leave. These federal and state cases have to be kept quiet.”

Shelly thought she was being sent to a puppy mill; instead, she became part of something that had never been done before. And saw things she’d never seen before.

“These dogs were on steroids, they were starved, they were missing jaws, eyes, limbs. Some had mentally shut down, they crawled into a ball and shook, had no trust whatsoever.”

Shelly spent two weeks there on her first visit. She triaged the dogs, separating them according to temperament and physical injuries, creating areas for pregnant dogs or particularly aggressive ones.

“I cannot tell you how awful it was,” she notes, trying not to cry at the memory. “We walked down the aisles, and we could hear the crunching noise our shoes made from walking on fleas and ticks.

“There was a lot of chaos—this was new to everyone. Nothing like this had ever happened, it was being covered by the national news, and protocol changed daily.

“Some of these dogs were too damaged to be saved, but some of them? After all they’d been through—the rape stands, treadmills, fighting, starvation—all they wanted was love.”

The dogs were cared for in three warehouses for months, and Shelly returned there 11 times. By the following March, the so-called Pit Bull Palace was finally closed. In the end, 63 percent of the dogs were able to go to rescues and shelters to be adopted, and scores of people were indicted on felony animal abuse or other charges.

Shelly brought three things back with her. One, a sense of purpose.

“After the Missouri 500, helping to rescue fighting dogs became my passion. I started learning about pit bulls, I was able to learn from top people about the breed. I learned that pits need more decompressing after a traumatic incident—that was new to me.”

She also brought back a lovely petite pit named Bella. Now 8 years old, Bella lives the good life with Shelly. Bella was considered a federal case, so Shelly was honored to be allowed to bring her back.

“Actually, Bella chose me,” Shelly laughs. “She was one of the dogs I took out for play time. But she didn’t care about playing: she hugged me, stayed close to me, only wanted me and my time.

“Bella had been ‘rolled,’ a technique used to see if a dog has the instinct to fight. It starts when they are puppies, being encouraged to fight. Bella was on her way to being either a bait dog or fighting dog.”

It took months to integrate Bella into Shelly’s family of dogs.

“Real life was new to her,” Shelly points out. “All she’d known was abuse and a dark, small cage. She still hates car rides: it reminds her of being taken somewhere to do ugly things.”

But to meet Bella today, you’d never know the ugliness this sweet dog has been through. Running in Shelly’s back yard, playing with the other dogs, she’s become what Shelly says is a positive advocate of the breed, showing just how wonderful pits can be, despite their past, despite their reputation. It’s why Shelly continues rescuing today.

“I’m convinced Bella had a purpose—to lead me on to bigger and better things.”

Oh, and the third thing Shelly brought back? The award for Most Dedicated Volunteer in the Missouri 500, given by the president of the Humane Society of Missouri. But Shelly doesn’t dwell on that.

“I just want to help my breed,” she says. “The best recognition is when a dog gets out and is given a real life.

“It’s not about me. It’s about the animals.”