It’s been a big week for Bardstown native Dustin Collins.  His single, Cold Dead Hands, is number one on Billboard’s Hot Single Sales. 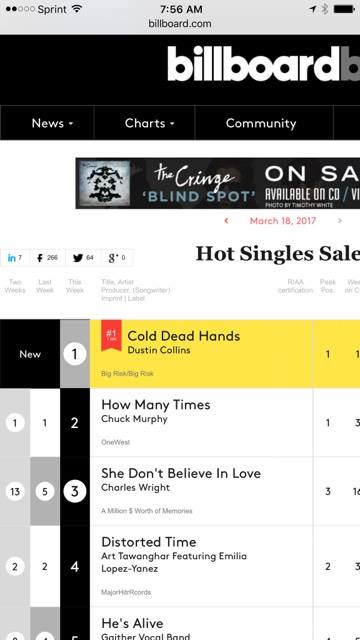 The up-and-coming country star tells Kentucky Living about the song, his career, and what living in Kentucky means to him.

KYL: Just how does it feel seeing your song Cold Dead Hands on the top of Hot Singles Sales?

DC:  It’s incredible. One of the most exciting days of my life.

KYL: The song Cold Dead Hands certainly is a straightforward song with nothing held back. Tell us about the inspiration behind this song?

DC: Yeah, it’s pretty straight-forward. I wrote it more as a statement to say, middle America is now bowing down and that just because certain areas of our country don’t want something. It doesn’t mean that they can shove their policy on us. We have long traditions in this country and this was just my way of saying a lot of us are not interested in giving up or giving in.

KYL: Tell us how living in Kentucky helped define your musical style?

DC: I grew up playing music in Bardstown with my dad, mom, and uncle and we always played around the kitchen table, and camp fire. Old country tunes mostly. But a lot of the banjos and hard stomping comes in from the bands and bluegrass music I grew listening to in Nelson County.

KYL: How have you been able to break through in such a cutthroat business?

DC: It’s always been for me about keeping my head down and pushing through the “Nos” and the people who would want to mislead you and rob you blind. The most important part is to find someone who knows what they are doing and that you trust absolutely to manage the business parts of your career.

KYL: Finally, you are going to be hitting the road, with plenty of stops in Kentucky. What can the people look forward to when they come to your concert?

DC: Yeah, we have been everywhere from Key West to Ohio. We have opened shows for guys like Kane Brown, Granger Smith, Easton Corbin, and Old Dominion. I hope that when people come to shows they are all different. I never want to do the same thing twice. I always want our concerts to be exciting.