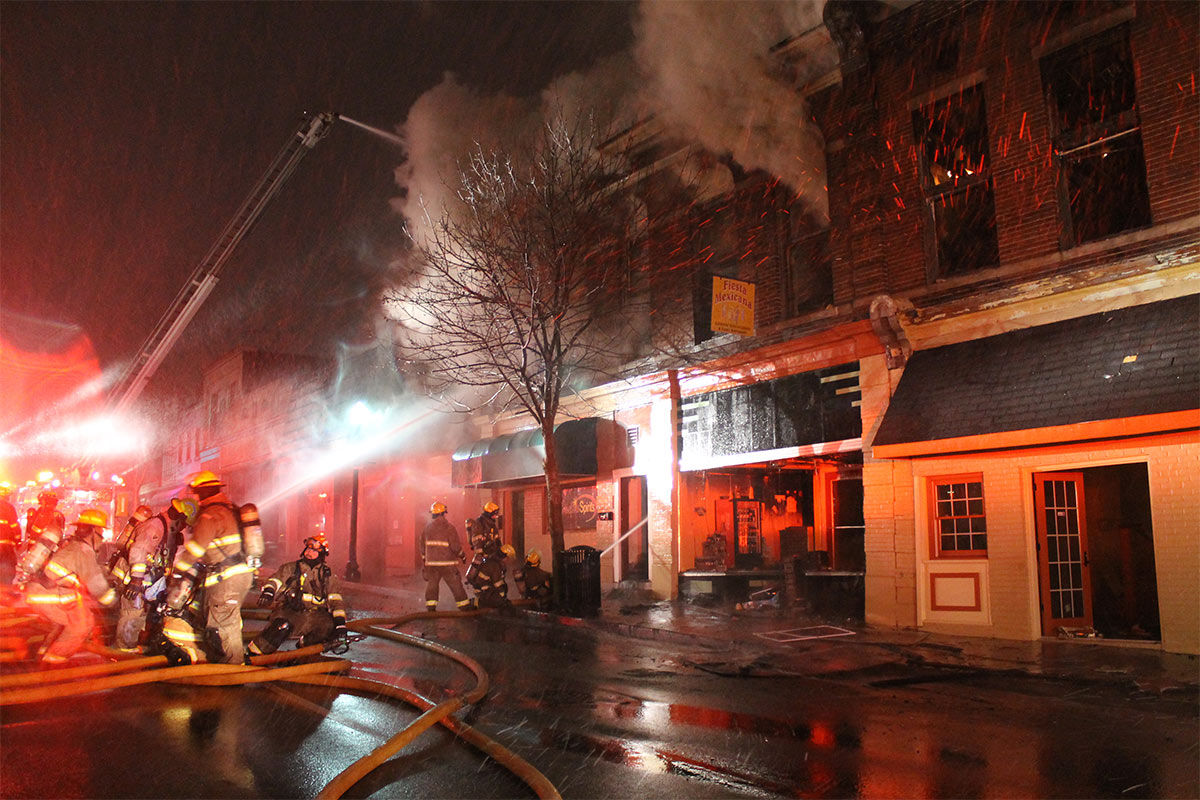 The January 2014 fire death of nine members of a family near Greenville in Muhlenberg County—eight children and their mother—devastated the community and made national headlines.

At press time, 37 Kentuckians had lost their lives in 27 residential fires just this year (January 1 through July 13), according to media reports gathered by the U.S. Fire Administration.

“In the past, our traditional targets for fire safety messaging have been children, seniors over 65, and firefighters,” because those groups have had historically higher fire fatality rates nationally, says Greg Schultz, public education chairman for the Kentucky Firefighters Association and recruitment and retention officer for the Burlington Fire Department.

The problem is, fire deaths in Kentucky routinely also include young and middle-aged adults. “We’ve come to realize that adults age 25–65 are the decision-makers in most families. If they are not on board with fire safety, then the rest of the family living in the home cannot be on board, either,” Schultz says. Recently, the U.S. Fire Administration launched a campaign with the slogan “Fire is Everyone’s Fight” to emphasize that fire prevention depends on all ages.

Fire Chief Michael Morgan in Union, who is president of the Kentucky Association of Fire Chiefs, agrees. “Over the years, we’ve done a pretty good job of reaching children through the schools, and getting fire safety messaging through to them: Don’t play with matches. Stop, drop, and roll. Dial 911. Have an escape plan. And so on,” he says. “But what we’re seeing is that we need to also include adult education messaging, because the fires that we’re seeing (when there is a preventable cause) are more often the responsibility of an adult’s actions rather than a child’s.”

Case in point: This past January, Morgan’s fire department responded to two house fires within days of each other, where both homes were a complete loss. One was the result of a space heater being placed too close to something combustible. “Typically, in those cases, it’s not a result of a malfunction of the auxiliary heater, but rather the misuse or misplacement of the heater,” Morgan says. The other fire broke out when homeowners cleaned their wood-burning fireplace and placed the ashes—which had not cooled—in the garage.

Take a look at these tips from Kentucky fire experts

Chief Shane Crutcher of the Rineyville Volunteer Fire Department in Hardin County recalls investigating a home fire about five years ago that killed two members of his community. “One thing struck me the most,” he says. “After the fire, we heard a small chirping in the distance and discovered that there had in fact been a working smoke detector in their home. But it had been placed in a dresser drawer, surrounded by clothes, where no one could easily hear it.” Since that fire, Crutcher’s department has worked in partnership with Rineyville Elementary School to distribute about 70 smoke detectors to homes without one. Check with your local fire department; some have programs to make smoke detectors available at no cost to those who cannot afford them.

Bottom line: Install smoke detectors inside and just outside of every bedroom in your home, as well as in pathways of exits like hallways and stairways on every level of the home. Detectors should be placed on ceilings or high on the wall, since smoke rises. All smoke detectors more than 10 years old need to be replaced. Check your detectors monthly, and be sure to replace their batteries each fall and spring when you adjust your clocks for the time change.

While you’re at it, install a carbon monoxide detector
Winter months increase the threat of carbon monoxide poisoning, as homeowners turn to auxiliary sources of heat. Introduced into homes when natural gas, wood, coal, propane, or other fuels burn incompletely—or when vehicles or generators are left running in a home’s attached garage—carbon monoxide is known as the “silent killer” since it can’t be seen or smelled. Opt for smoke detectors that also monitor CO levels, or install a dedicated CO detector (models are available for under $50) outside each sleeping area and on each level of your home.

Practice EDITH—Exit Drills in the Home
Sit down with every member of your family and map out at least two possible exit routes from every room of your home. Practice these exit routes often enough that you won’t panic if you need to use them. Be sure all pathways to the exit routes remain clear, and never permanently shut a secondary exit route (something Schultz sees done routinely to the back doors of Kentucky mobile homes).

Establish an outdoor meeting spot and an alternative location, like a neighbor’s home, from which to dial 911. Never go back into a burning house to retrieve your cell phone or to call 911, advises William Hicks, fire chief of the White Hall Volunteer Fire Department in Madison County and program coordinator for Eastern Kentucky University’s Fire Protection and Engineering Safety Technology Program.

Don’t delay in calling 911
Even if you think you can handle a contained fire, such as a chimney fire, call 911 immediately. Chimney fires can get out of control and spread to walls quickly. Schultz says early notification of the fire is especially essential in rural areas, where many departments are volunteer-based and firefighters must respond from home before reporting to the station. 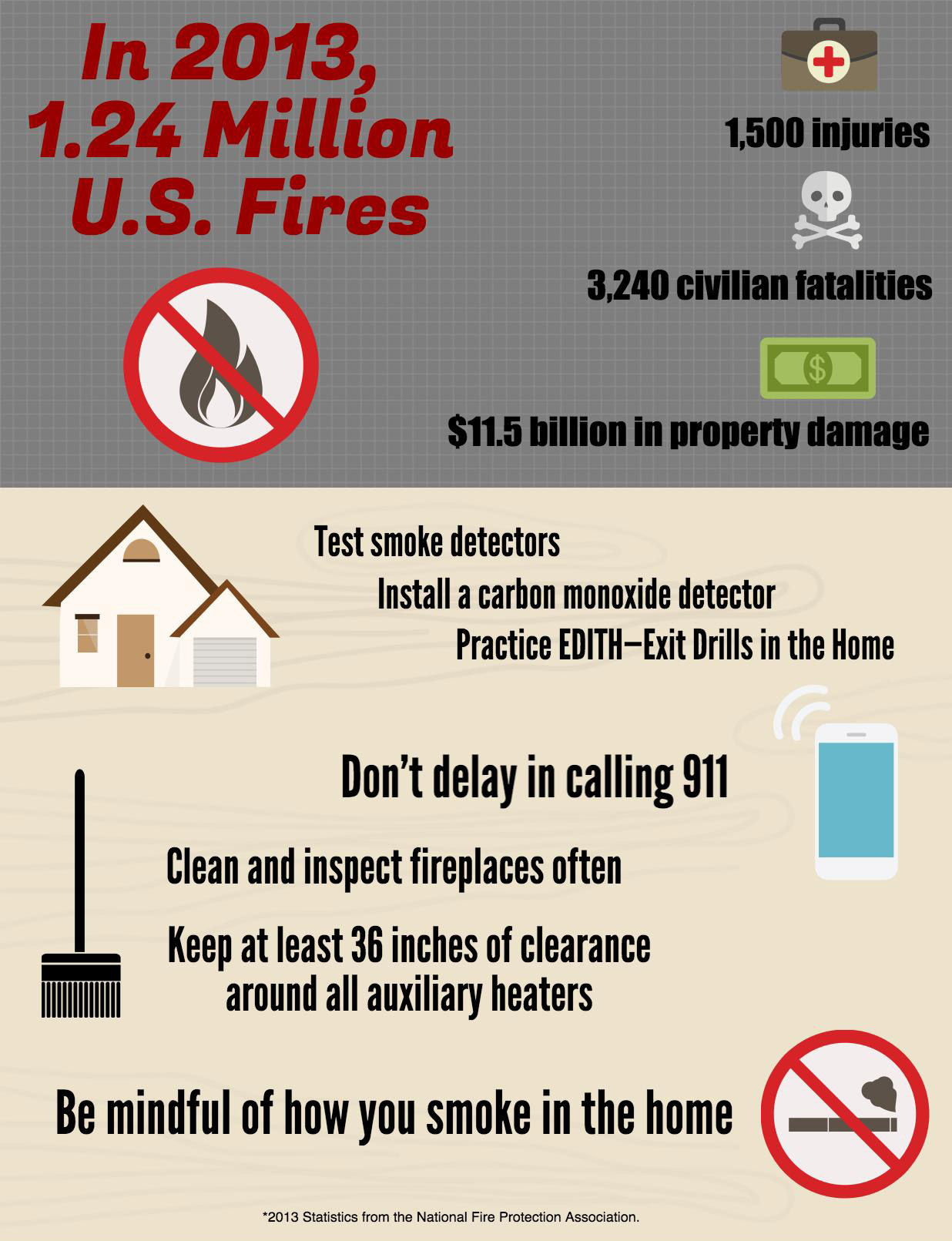 Clean and inspect fireplaces often
To prevent the risk of chimney fires, chimneys should be routinely cleaned and inspected to avoid harmful buildup of creosote, which obstructs the flue, Schultz says. After clearing the grate in your fireplace or wood-burning stove, never dispose of still-warm embers or ashes near your home. Ashes should be deposited only in a metal container, far from the home’s exterior. Never place ashes on a wooden deck, on top of leaves, pine needles, or other natural combustibles outside, or near vinyl siding.

Keep at least 36 inches of clearance around all auxiliary heaters
Be sure to keep at least 3 feet of clearance between any auxiliary space heater and all combustible materials, including couches, bedding, throw rugs, and draperies. “One of our main (fire safety) problems we face in Kentucky is the improper use of alternative heating sources,” Swope, the state fire marshal, says. “We want everyone to allow at least 3 feet of clearance around auxiliary space heaters, and we encourage homeowners to turn heaters off when they go to sleep.”

Be mindful of how you smoke in the home
While cooking is the No. 1 cause of fires in America, smoking materials, i.e., lit cigarettes or improperly disposed cigarette butts, are the single largest incendiary cause of fire fatalities in the U.S. annually, says Swope. Never smoke in bed or while drowsing in a recliner, and be sure to use deep-rimmed, heavy ashtrays that are difficult to knock over, he advises.

Since October, Division of Forestry and KSP officers have used two man-tracking bloodhounds named Chloe and Magic from the forestry camp to try to sniff out and catch arsonists in their tracks.

Officially named the Blood-hound Wildland Arson Investigation Program, the new initiative has already shown impressive results. “Over a 10-year period, Bell County averaged 47 wildland fires a year. But in the first three months of the bloodhound program, they had just one fire,” says Mike Harp, the Kentucky Department of Forestry’s deputy fire chief. “We really believe that significant drop is due to the dog program being based right there in that county.”

Another nearby county had only two wildland fires in the first three months of the program, when it averages 39 a year. Currently, the dogs are available to investigate arson calls in a six-county area near Bell County, though the Division of Forestry already has plans to expand the program.

While no arson arrests have been made yet using the dogs, they have twice successfully tracked individuals present at a fire’s point of origin: once to a man who fled the scene when a brush fire got away from him, and another time to a man who’d happened upon a fire scene and reported it to 911.

“The dog got on his scent and tracked him right back to his front porch,” Harp says. “We eventually verified that he had indeed dialed 911 from the site, as he claimed, but he was amazed that the dog knew he’d been there.”

For now, the dogs are doing their job simply by deterring would-be arsonists. “As soon as we get an arrest of an actual arsonist, it will send shock waves through those counties down there,” Harp says.

“The fire safety programs at EKU have a national and international reputation for being top-notch. We are one of only a handful of universities that offer a fire safety engineering and technology degree track. And our bachelor’s degree program for arson investigation is the only one of its kind offered in the country,” says EKU associate professor James Pharr.

About 400 students currently are enrolled in the degree program on campus, with another 400 taking classes online.

“We love having the face-to-face relationships with our students on campus, but the reach of our online classes is amazing as well. One night I was working with two students online—one was in Anchorage, Alaska, and the other was in Iraq,” Pharr says.

“Our graduates end up in fire protection leadership roles all over the country and the world,” says associate professor William Hicks, the program’s coordinator. “For example, one is currently the state fire marshal in South Carolina. Another is the editor of Firehouse magazine, one of the top periodicals for our industry.”

“Our graduates are literally changing in very positive ways the future of the fire protection and safety fields,” says Pharr. “As one of our students put it, ‘We have three degrees in our program, but one goal: saving lives.’”

Fire Safety Timeline
Learn how quickly a fire spreads and how much time a typical family has to evacuate from the moment a fire ignites. Also, learn the leading causes of house fires, and percentages of homes that had an operational smoke alarm when a fire fatally occurred.

Robin Roenker from the September 2015 issue