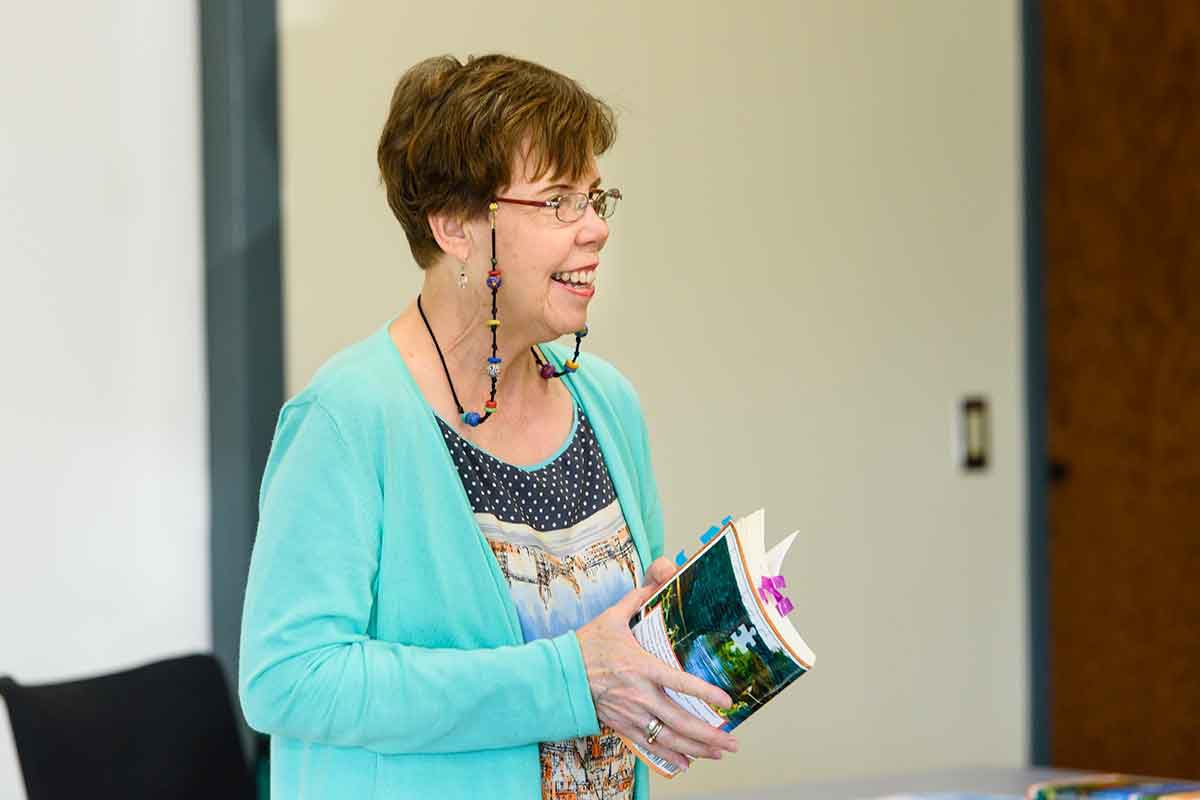 When she was a young girl growing up in Harlan County in the 1950s, George Ella Lyon served as her mother’s special assistant in the weeks leading up to Christmas.

Her mother’s siblings lived in distant places, so the family often had to exchange gifts by mail. Lyon helped her mother pack giant boxes full of presents, and after they were shipped, had another important task—waiting for the gifts from her aunts and uncles to arrive. Sometimes those packages included books.

These memories bring a wistful smile to Lyon’s face now, 60-some-odd years later, as she recalls them over a cup of tea. “Christmas at our house always involved books. And Christmas, like all our gatherings, was also a time for telling family stories. Memories from earlier times become superimposed on new memories, so in that sense your memories are like a poem—they have many layers.”

Perhaps it’s no surprise, then, with a childhood so grounded in literature and the Appalachian storytelling tradition, that Lyon would not only have a writing career that boasts more than 40 books—including novels, poetry collections, young adult literature, and children’s picture books—but that she would also edit an anthology devoted to Christmas in her native state.

Published in 2003 by the University Press of Kentucky, A Kentucky Christmas has become a holiday staple for families across the Commonwealth. But when she was first approached with the concept by then-editor Jennifer Peckinpaugh, Lyon remembers being hesitant. “Their thought was to do 10 short stories, but that didn’t interest me very much. In our next conversations I asked, ‘Could we have some poetry?’ Then I thought, ‘Surely we could have some more genres. More writers. And we could have new people—maybe some whose work hadn’t yet been published in a book.’ And since it was about Christmas, I thought we had to have some recipes. And songs. And a story for children. I wanted nonfiction, too.”

University Press agreed, and Lyon began selecting work from celebrated writers, including James Still, Wendell Berry, Harriette Arnow, Bobbie Ann Mason, Loretta Lynn, Crystal Wilkinson, Silas House, and Jim Wayne Miller, as well as a host of emerging talents. Traditional themes of family and home were featured, as well as those of displacement and poverty that have often marked Kentucky families. Lyon explains that she didn’t want the book to be simply another sentimental holiday collection that ignored the pain often lurking behind the garland and tinsel: “Christmas can sometimes be a terrible time for people. Difficulties in your life don’t stop because it’s Christmas, and the expectations of joy can intensify whatever a person is struggling with.”

Lyon looked back to Harlan County for one such selection, a poem titled Home for Christmas written by her mentor and high school creative writing teacher Kathleen Hill Sterling. “It’s about having to celebrate where you are now,” Lyon says. “Whatever Christmas was before, whatever losses you’ve suffered, however far you’ve traveled, Christmas has to be where you are now—that’s the last line: ‘it has to be here.’”

The poem has been received especially well at the dozens of holiday-season readings celebrating the book that Lyon has participated in over the years. These events at libraries, bookshops, and community centers across the Commonwealth often feature many of the book’s contributors reading their work, as well as music from local musicians. Lyon chuckles as she recalls an early one held at Bohannons’ Books With a Past, a now-defunct Georgetown shop. “We had maybe 10 writers and sold tons of books. They ran out and had to send somebody to the warehouse to get more books because people were buying multiple copies.”

At a similar event at the Laurel County Public Library in London in 2006, one audience member approached Lyon’s book signing table with a stack of 10 copies—all to give as gifts. Peggy Mershon, organizer of the celebration and now the library’s district director, has witnessed the book’s appeal firsthand among her patrons. “For so many, A Kentucky Christmas resonates because it brings back memories of families and their traditions,” she says. “I think a lot of people are looking for ideas of how to make the holidays more meaningful and less commercial, and the collection reminds them of simpler times when people didn’t need much to be happy.”

In a nod to the book’s enduring popularity, the University Press of Kentucky released a paperback version in 2012, giving the book a whole new life. This year it will take on another dimension when the Woodford Theatre in Versailles presents stage adaptations of writings by Anne Shelby, Leatha Kendrick, Frank X Walker, and others that will run throughout December. “The stories feel like ours,” explains adaptor and director James W. Rodgers. “They remind us of where we come from, who we are—an embedded part of ourselves.”

For Lyon’s part, she believes the appeal of A Kentucky Christmas also reflects the fierce pride that Kentuckians have in their home state, an identity forged by stories and topography. “It comes of where we’re located geographically. We’re North and South. We were the frontier at one point. And then we have all these forces that meet here—some of which I don’t think we even have names for—and it produces powerful writers and music,” she says. “There’s a richness and a diversity of history and culture here. And the landscape—the mountains and the rivers. They shape us, and also speak in us, I believe.”

Such reverence for her home has served Lyon well in her new role as Kentucky poet laureate, an honor recognizing her vast body of creative work that was hailed by her literary colleagues. “I couldn’t think of a more deserving person to pass the baton to,” says her predecessor, Affrilachian poet Frank X Walker. “George Ella gives beginners and mid-career writers like myself an example of how to succeed in multiple genres.” Lyon says her two-year tenure, which began with a March ceremony in the State Capitol rotunda, will be focused on encouraging people “to find and tell their own stories.”

“I grew up surrounded by family stories,” she says, again recalling all those Christmases in Harlan County. “Too often, people think that they don’t have any stories or that their stories don’t matter. Yet our stories are the most fundamental parts of us. I want…them to feel the worth and importance of their own stories and of passing them on.”

In the summer of 1993, George Ella Lyon sat down to work on a poem that had been forming in her head as a list—not her typical way of writing poetry, she says.

The snippets were written in response to a poem by her friend Jo Carson, the late award-winning playwright and poet from east Tennessee. Centered around the phrase “I am from,” Lyon began editing her list into a tribute to her family and childhood spent in Harlan County, as well as to the occupations, traditions, and place names of Kentucky.

Where I’m From
I am from clothespins,
from Clorox and carbon-tetrachloride.
I am from the dirt under the back porch.
(Black, glistening,
it tasted like beets.)
I am from the forsythia bush
the Dutch elm
whose long-gone limbs I remember
as if they were my own.
I’m from fudge and eyeglasses,
from Imogene and Alafair.
I’m from the know-it-alls
from the Perk up! And Pipe down!
I’m from He restoreth my soul
with a cottonball lamb
and ten verses I can say myself.
I’m from Artemus and Billie’s Branch,
fried corn and strong coffee.
From the finger my grandfather lost
to the auger,
the eye my father shut to keep his sight.
Under my bed was a dress box
spilling old pictures,
a sift of lost faces
to drift beneath my dreams.
I am from those moments—
snapped before I budded—
leaf-fall from the family tree.

Since its publication, the poem has had a remarkable life, with teachers in particular realizing its potential as a writing prompt. Their thinking goes that everyone has a “Where I’m From” poem buried inside them—and they’ve been proven correct. Lyon regularly receives “Where I’m From” poems from all over the world.

“It truly amazes me,” she says. “People who are in prison. People in refugee camps. England, Germany, Denmark, Spain, Sudan. I got e-mailed from a teacher in China who was using it. I got a whole hardbound book from a high school in Hawaii where the poems were in both English and Hawaiian.”

The credit, she says, belongs to the teachers. “(They) have shown me so much about how to use Where I’m From. I’ve seen teachers have students, who have already written a poem, research a historical figure like Abraham Lincoln and then write a ‘Where I’m From’ poem in the voice of that person. So it’s just a big circle. And I’m lucky to be in it.”

[x_icon_list_item type=”pencil”] Jason Howard from December 2015 Issue [/x_icon_list_item]
Jason Howard is the author of A Few Honest Words: The Kentucky Roots of Popular Music. His work has been featured in The New York Times, The Nation, Sojourners, and on NPR.