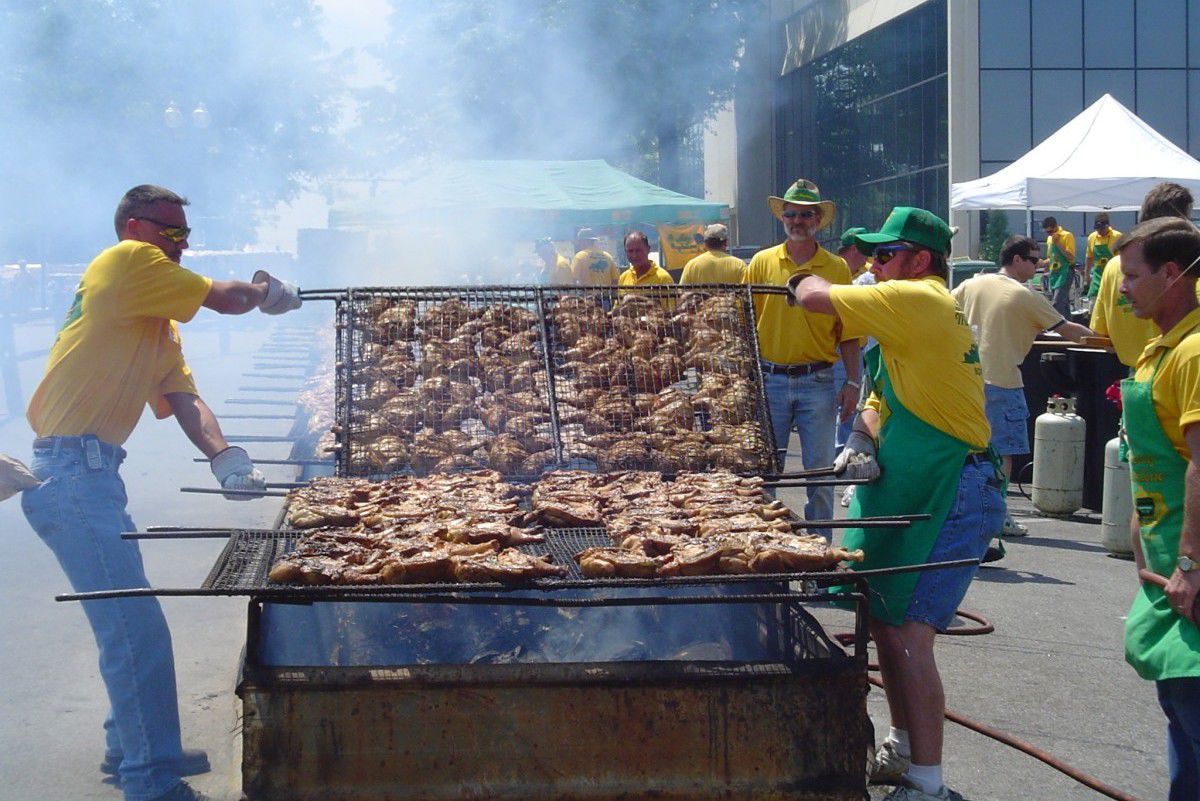 Follow us as we turn up the best tasting barbecue across the state at festivals, cookoffs, and eateries serving up your choice of meat with finger-licking sauce or rub

As in the Civil War, the Q wars pit brother against brother and region against state. Whether you spell it barbecue, barbeque, bar-b-q, BBQ, or just plain Q, that scrumptious dish sparks rabid fans across Kentucky, most of whom swear their way is the only way to cook it, eat it, and sauce it.

The Q issues are limitless: mutton, pulled pork, chicken, or ribs? Vinegar or mustard sauce? Open-pit, gas cooker, or backyard grill? Molasses baked beans or tomato-sauced pintos? Corn on the cob or cornbread? Where does burgoo fit in?

One thing is clear: Kentucky offers opportunities galore to help you decide. Barbecue festivals abound. Part of the proceeds—often a significant part—usually goes to charity.

Every Memorial Day Weekend, thousands of motorcycles rumble into Elizabethtown for BBQ, Blues & Bikes. This year, the kickoff event—the Thunder Into E-Town motorcycle ride—donated the proceeds from its entry fees to the Wounded Warrior Project.

Some festivals, like the International Bar-B-Q Festival in Owensboro, an institution since 1978, feature nonprofit and church-affiliated teams going grill-to-grill to raise money for various local charities and school programs and to win the Governor’s Cup for best barbecue.

Come September, pungent smells from 80,000 pounds of smoking pork and chicken will permeate Paducah for three days at its 20th Barbeque on the River. Some 40,000 attended last year’s event, with $448,000 distributed.

“Our mission is to cook the best barbecue in the world, draw the largest crowd, and raise the most money possible for charity,” says festival co-founder Susie Coiner.

Around 40 teams, some serious big-riggers from Kentucky and out-of-state, vie in hot competition while the crowd can purchase the delicious goods. The festival has become a small business incubator, with some participants starting their own lines of sauces and rubs.

Paducah police officer Will Gilbert and his barbecue teammates, competing as The Regulators BBQ, have won awards at numerous competitions, including Barbeque on the River. The Kevil team now caters and offers a line of its own Regulators BBQ “Kentucky Sauce.” (For more info click www.regulatorsbbqllc.com or call 270-994-1028.)

“We had a barbecue pit on the family farm in Carlisle,” Gilbert says. “My dad gave me his sauce recipe as a birthday gift and suggested entering Barbeque on the River as a fund-raiser for police charities. We won, and it’s taken off from there.”

Only four years old, the Kentucky State BBQ Festival last year was rated a Top 20 Event in the U.S. by the Southeast Tourism Society. Founded by Cindy and Brad Simmons, who own Lucky Dog BBQ, a catering company in Danville, the September event fills Constitution Square with nationally recognized big-rig pitmasters, such as Mike Mills, “The Legend” of barbecue, and Shane Draper of Cunningham—located in far western Kentucky in Carlisle County—whose big rig is “32 feet of barbecue battle wagon.”

“What makes this festival different is that it’s an eating event and not a competition,” Cindy explains. “People get to come and enjoy these celebrity pitmasters’ food.”

Held in Springfield in October, the Jim Beam BBQ Classic is the last of seven Kansas City Barbecue Society-sanctioned events in the Jim Beam Bluegrass Barbecue Showdown that determine the Kentucky Champion.

By its nature, barbecue breeds characters. Micah “Red” Seavers is pitmaster at his family’s Southern Red’s BBQ in the old Pilot Oak Grocery Store in Water Valley in Graves County, serving chicken and 24-hour, open-pit beef brisket, pork, and ribs in this 1940s gas station. (They were the first-place winners of the Kentucky Living 2014 Best in Kentucky “Nonfranchise Barbecue” category.) He laughs. “People say, ‘Man, there’s actually a restaurant in here?’ But our health department score has never been below 97!”

So what’s the secret to good barbecue? A few experts weigh in.

Six-time grand champion at Barbeque on the River in Paducah, James F. Stovall is owner and pitmaster of Larry, Darrell & Darrell in Mayfield. He’s been smoking meats for 30 years. And never in a gas cooker. “In western Kentucky we smoke the meat first over an open pit to get that old-school, hickory wood-smoked flavor,” says Stovall. “You can actually taste the smoke flavor in the meat before you add sauce.”

Western Kentucky University English professor Wes Berry, aka The Hungry Professor, concurs. He wolfed down barbecue statewide while writing The Kentucky Barbecue Book.
“You can use sauce, but why spend 24 hours lovingly smoking a piece…and cover it with sauce?” says Berry, who gained 25 pounds doing research.

Brian Cramer, owner and pitmaster of one of Appalachia’s few barbecue establishments, Pig in a Poke in Prestonsburg and Pikeville, defers to the fact that his barbecued meats are all hand-pulled and side dishes are homemade.

Whatever you pick, Q fans, it’s all good!

BBQ secret recipes
Many of Kentucky’s barbecue restaurants are fondly referred to as “joints” and often become favorite community gathering spots. Few, however, share their secrets, which may be generational.

Kentucky Champion on the BBQ Pitmasters TV show, John Foreman is owner and pitmaster of Old Hickory Bar-B-Q, which began in Owensboro in 1918. He still uses his great-great-grandfather’s recipe for barbecue. And he’s keeping it to himself…”not in a safe,” he laughs. “It’s in my head.”

Another generational pitmaster, Shane Draper is a big-rigger whose granddad owned Draper’s Pit Barbecue in Bardwell. He now competes nationally and won honors at the Memphis in May International Festival.

I remember the faces in my grandfather’s restaurant,” Draper says. “You’d serve people a barbecue sandwich, and they’d take a bite, look up at you, and nod as if to say, ‘You’re still doing it right.’ Hearing that today is one of my greatest joys.”

Two joints, Dave’s Sticky Pig in Madisonville and Hickory Hill Barbecue in Scottsville, have whispered a couple of their recipes below to Kentucky Living readers. Enjoy!

A preferred method is this: Place on smoker, uncovered, and cook about 12 hours at around 225 degrees. We’ve experimented with liquid smoke but it isn’t the same. These beans will come off the smoker with a crust of intense smoke flavor on top. Stir well and let it rest at least an hour, then stir again before serving.

Heat vegetable oil in a skillet over medium heat. Add the onion, garlic, and bourbon. Simmer for 10 minutes, or until onion is translucent. Mix in the remaining ingredients and bring to a boil. Reduce heat to medium low and simmer for about 20 minutes. Run through a strainer and enjoy. The amount of bourbon can be adjusted to taste.