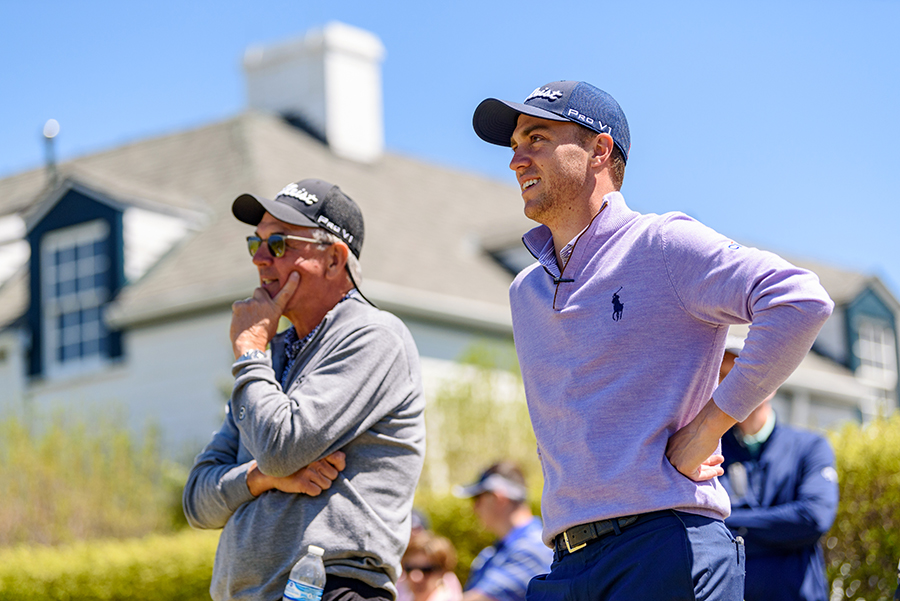 Pro golfers share Kentucky roots and passion for the sport

Call it fore! shadowing: Here are key moments from the childhoods of three Kentucky golf champions:

In Franklin, 8-year-old Kenny Perry spends much of the week waiting for Saturday. His dad sells insurance and is gone during the week. But on weekends, the two of them go to the golf course for their special time, where the father tees up balls for his son for hours, and watches him hit and hit and hit.

In Campbellsville, J.B. Holmes joins the high school golf team—in third grade. He takes a little teasing at first from a few of his much-older teammates, but soon, he’s beating them all and they either cheer or stay quiet.

In Goshen, it’s sunset at the golf course on a humid evening. The driving range is closing, but there is 7-year-old Justin Thomas, whacking balls into the falling night, the arc of his swing almost eerily perfect.

These are the origin stories, in a sense, of the three Kentuckians who have most recently climbed to the top of the professional golf world. To be clear, these three aren’t the first notable pro golfers from Kentucky. Bobby Nichols of Louisville beat Jack Nicklaus for the PGA Championship in 1964 and Gay Brewer of Lexington won The Masters in 1967, just to name two.

At Kentucky Living, we wanted to take the opportunity to appreciate this rare moment when three accomplished Kentucky PGA pros are active, hitting the links and racking up wins and earnings. They’re different ages and at different stages of their careers, but they’re united by an enduring devotion to their home state and to the marvelous and maddening game they learned here.

Those weekend golf outings with his dad stuck with Kenny Perry, 57. “The game got a hold of my soul,” Perry says, “I just loved everything about it.”

That love has endured, even through heartbreak. Perry has twice been within a few manageable strokes of major golfing victories, only to come up short in both the 1996 PGA Championship and The Masters in 2009. “When I lost The Masters, that was devastating. I was 48 years old, probably past my prime, but I was playing some of my best golf.”

VIDEO: Kenny Perry on the key to longevity in pro golf

And he still is. Perry officially retired from the PGA Tour in 2015 (with $32 million in earnings) and currently competes primarily on the Champions Tour, a professional circuit for golfers over 50. Last year, he won the U.S. Senior Open Championship. He also designed and orchestrated Kenny Perry’s Country Creek Golf Course in Franklin, and contributes to enough charities to earn multiple humanitarian awards.

On the course, the biggest highlight perhaps is the 2008 Ryder Cup, when Perry helped the U.S. capture the trophy at one of the sport’s global centerpieces, held that year at Valhalla Golf Course in Louisville. “It was amazing,” Perry recalls, especially since he shared the moment with his dad, Ken, who would pass away in 2014. “My dad was out there in his bib overalls. He came out and gave me a big hug.”

A career interrupted—for the better

Among the people who got bear hugs and back slaps from Perry in the moments after the victory at Valhalla was Ryder Cup teammate and fellow Kentuckian J.B. Holmes.

Twenty-two years Perry’s junior, Holmes was making what would be the first of two winning Ryder Cup appearances, his second coming in 2016. Holmes’ PGA record (four wins, 37 top 10 finishes, $22 million in career earnings) has been affected by his diagnosis with Chiara malformation, a condition the Mayo Clinic website describes as “a condition in which brain tissue extends into your spinal canal.” Holmes, who was experiencing vertigo, had brain surgery in 2011. It took more than a year to feel 100 percent, but Holmes was back hitting balls after about five months. He now says his time away from the game was beneficial. “You learn to appreciate it more. All in all, it was a great experience and helped me grow as a person.”

VIDEO: Holmes talking about his best shot during 2008 Ryder Cup

The University of Kentucky alum remains fiercely competitive—“You’ve got to be,” he says—but offers this advice to amateur golfers who lose their temper after missing a putt: “Have fun. It’s just a game.” Win or lose, Holmes says, he appreciates the cheers he gets from UK fans on courses throughout the country. “Pretty much every week somebody yells, ‘Go, Cats!’”

Sportswriter Billy Reed assesses 24-year-old Justin Thomas’ prospects this way: “He could be by far the most successful golfer ever produced in Kentucky. His potential is really unlimited.” As of this writing, Thomas ranks No. 2 in the world, according to the Official World Golf Rankings, and has already won a major, the 2017 PGA Championship.

Part of Thomas’ success is that same swing that turned heads at Harmony Landing. According to Golf Digest, “At 145 pounds, Justin Thomas is one of the biggest hitters on tour, pound for pound. It’s actually insane how far JT hits it.”

VIDEO: Thomas on growing up on golf

Thomas’ dad, Mike, is the longtime golf pro at Harmony Landing, and Justin’s grandfather, Paul Thomas, an Ashland native, also played professional golf. Mike says his son always had “a tremendous desire to get better. I never had—and wouldn’t have—pushed him. He did that on his own.” From an early age, Justin seemed immune to pressure on the course. “Whenever a situation was tight, he was able to rise above it. Loved the heat,” his father says.

Justin says that heat is at the heart of what drives him to keep playing better golf. “I love that it’s all on you. You can’t rely on other teammates to bail you out; everything that happens is from the work you put in and the decisions you make.”

Thomas knows both of Kentucky’s other PGA standard-bearers well and recently defended Holmes from criticism for slow play at a tournament in January. Thomas said afterward, “I have J.B.’s back all day on that situation.” Of Perry, Thomas says, “KP is one of the nicest and best guys I know; I’ve always loved talking to him and spending time with him.”

Ask Holmes and Perry about their younger colleague and you hear no hint of jealousy, only respect and appreciation. “Justin’s been playing amazing lately,” Holmes says. “It’s fun to watch him.”

Perry says, “I’m proud of him. I text him a lot.” Looking ahead, Perry says, “I hope he stays focused. It’s a long career.”

Thomas seems poised for greatness, though, as Holmes and Perry have learned, the game can be unpredictable. Still, if Kentucky’s youngest golf star ever needs guidance on how to play his way out of the sandtraps of a life in golf, his fellow Kentuckians will be there to help him find his way to the green.

Emma Talley’s Rookie Year: ‘I like where my game is going’