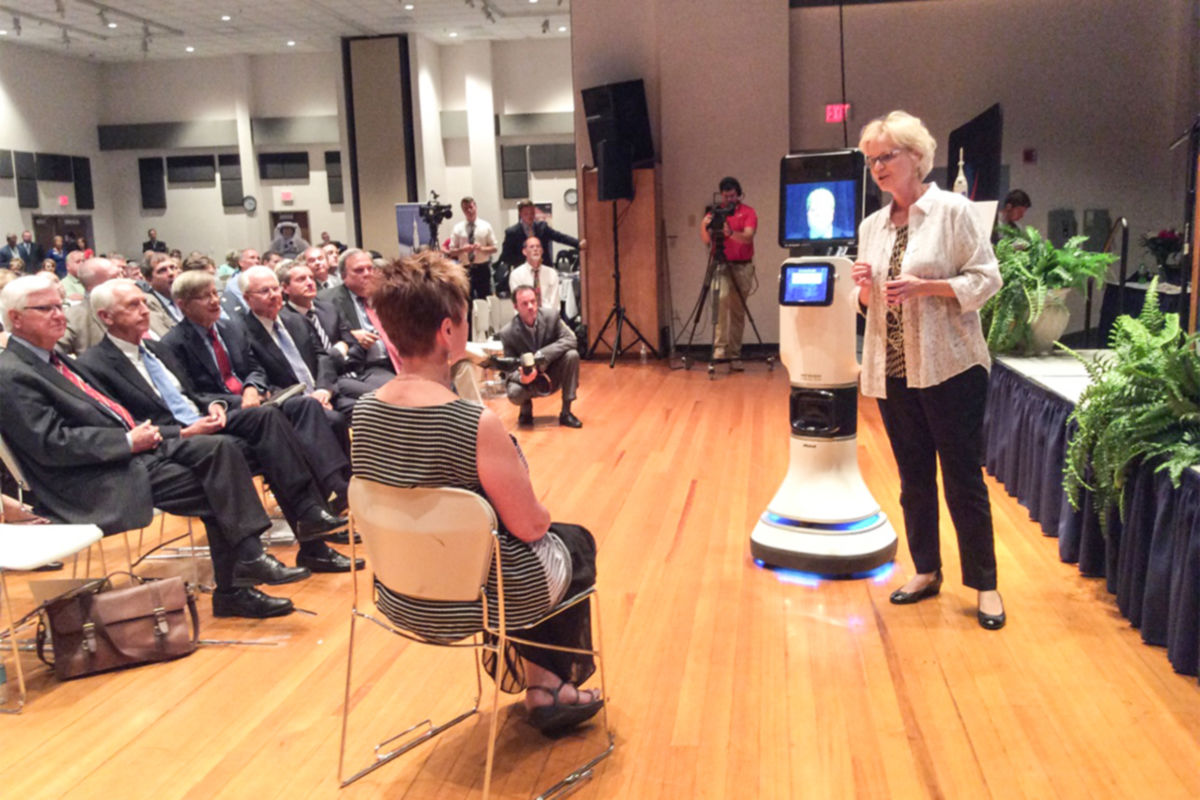 Showing a benefit of high-speed Internet at the kickoff of the KentuckyWired broadband project in August, Dr. Kerri S. Remmel, chair, University of Louisville Department of Neurology, stands next to a robot re-creating a remote stroke victim treatment. The two main speakers at the event, U.S. Rep. Hal Rogers and former Gov. Steve Beshear, watch from the front row.
Innovative project bringing high-speed Internet access to every county in the state

Fiber-optic Internet cables are being strung on existing utility poles along I-75 this winter, to bring faster broadband service to eastern Kentucky as early as this summer. It’s part of an innovative plan to cover the entire state with speedy Internet service by 2018.

“Kentucky has been at the bottom for way too long in not having adequate bandwidth,” says Mike Hayden, program director for KentuckyWired, a part of the Kentucky Communications Network Authority, recently created to manage this statewide high-speed Internet access network. “This should raise us to a national standard, and ultimately put Kentucky ahead of other states and be a national leader.”

The aim is to improve Kentucky’s economy by building a 3,400-mile, state-of-the-art network allowing high-speed access in every county.

At a ceremonial kickoff of the project in Hazard last August, U.S. Rep. Hal Rogers said KentuckyWired “will diversify our economy…It takes away the historic barriers to better jobs.”

The roots of KentuckyWired go back to 2013 with the formation of a group called SOAR—Shaping Our Appalachian Region. Rogers and former Governor Steve Beshear worked together to launch SOAR to explore ways to improve the economy of eastern Kentucky. One of its first recommendations was faster Internet connections.

The estimated $324 million KentuckyWired project will be funded with a proposed budget as follows: $30 million from the state government, $23.5 million of federal funds (some yet to be allocated), $238 million from 30-year bonds, and the remainder coming from private investors.

That bonding arrangement is a key to what makes KentuckyWired unique, because it’s based on a partnership with a private international investment company. The state of Kentucky has contracted with the Australia-based Macquarie Capital to raise the funds and build the network.

“Kentucky has really stepped outside the box,” says Hilda Gay Legg, a longtime consultant on rural broadband and vice chair of Broadband Communities magazine. “It’s the first time a state has gone with a private financial source for a statewide broadband network.”

An important part of understanding the KentuckyWired project is that it will build what is called “the middle mile”—the main trunk line of fiber optic cable. To make it useful, others will have to finish “the last mile” that will actually bring access to homes and businesses, schools, libraries, or others. Since KentuckyWired is an open-access network, the first of its kind in the nation, existing or newly created private or public service providers will be able to tap into the network to serve customers.

KentuckyWired’s Hayden says that as the fiber optic lines become available, the next step is for people across the state to connect.
“The last mile is a most critical component,” says Hayden. “Local communities have to pick up the ball and run with it now.”

Jackson Energy Cooperative based in McKee has been a strong community proponent in bringing high-speed broadband access to Kentucky, by supporting the work of the local Peoples Rural Telephone Cooperative (PRTC) to make Jackson and Owsley counties in eastern Kentucky nationally recognized communities for fast Internet service.

The rating of Certified Gig-Capable Providers is made by The Rural Broadband Association, for providing commercially available speeds of 1 gigabit per second, which the association says is about 100 times faster than what’s now in a typical house.

And that will help Jackson Energy’s members by making the area more attractive to employers, says President and CEO Carol Wright.

“As a co-op we take a lead in promoting economic development,” she says. “Most any manufacturing or technically advanced industry needs high-speed broadband to function.”

Wright supports the latest KentuckyWired effort to build high-speed Internet access for the rest of the state. She says that while Jackson and Owsley counties “have all the boxes checked” to be attractive locations for business, “Fiber optic connections will aid the other 13 counties in our service area.”