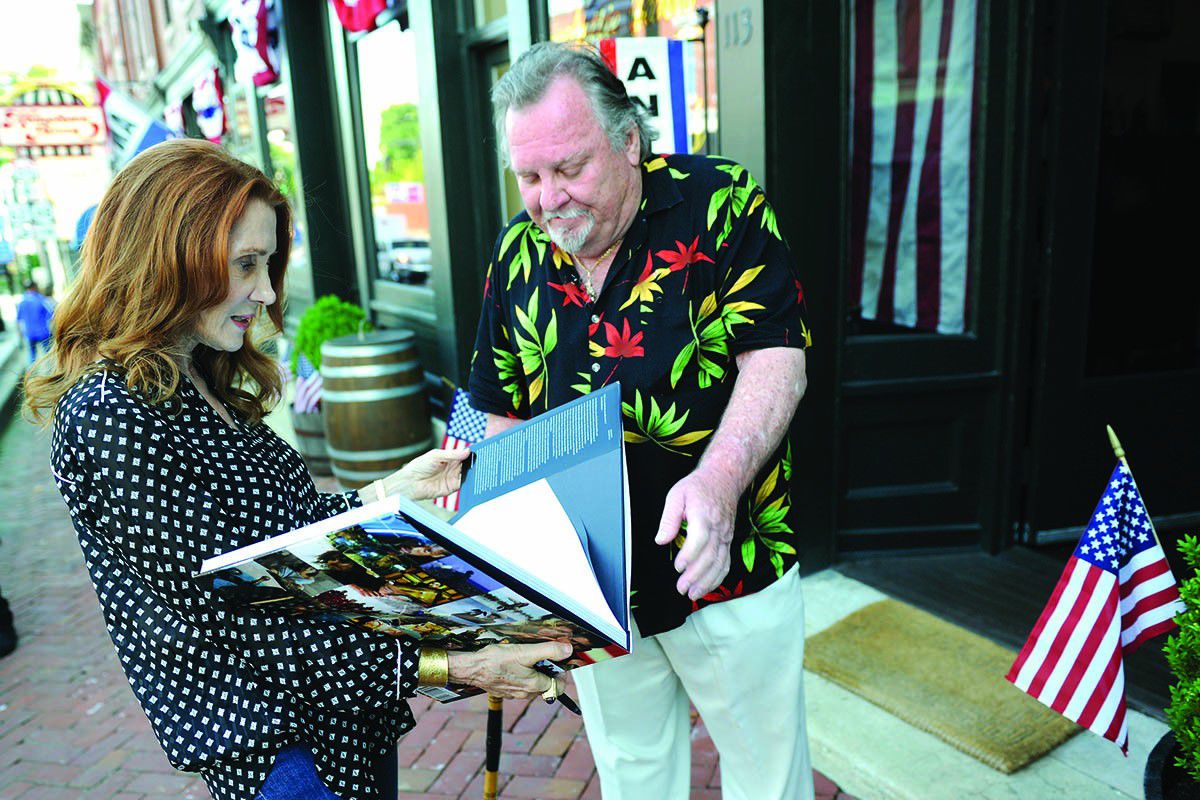 It’s a sunny Saturday in Bloomfield, Kentucky, and hundreds of people are lining up in front of Nettie Jarvis Antiques for the improbable chance to go a little bit Hollywood.

Bloomfield, population 1,038, is built largely around the intersection where KY 162, KY 55, and U.S. 62 meet in eastern Nelson County. On this particular day, however, Bloomfield straddles a kind of cultural crossroads—where city meets country, fantasy shakes hands with reality, and L.A. poses for pictures with KY. In a sense, this is where Linda Bruckheimer has lived most of her life.

She and her husband, legendary film producer Jerry Bruckheimer, are one of Hollywood’s premiere power couples. And they are Salt River Electric members who also own a farm of 1,600 acres just up the road.

This day is ostensibly a book signing for Jerry, who’s helped put together blockbusters like Beverly Hills Cop, Top Gun, and the Pirates of the Caribbean series. That’s him, the thin, soft-spoken man in the back corner of Nettie Jarvis, smiling and signing copies of the book Jerry Bruckheimer: When Lightning Strikes—Four Decades of Filmmaking.

Linda’s the trim redhead a few feet away, whispering detailed instructions to an assistant. This day, however, like Bloomfield’s recent revitalization, is largely a Linda Bruckheimer production, and none of this would be happening if it weren’t for one simple fact: “Kentucky,” Linda says, “is a place I’ve always loved.”
[pullquote cite=”Linda Bruckheimer” type=”left”]”I like dirt roads, scary roads, do-not-enter roads. I take guests on a rich one-hour ride through rolling hills, past signature dry stone walls, stopping at towns along the way to take in Kentucky’s engaging people and scenic countryside—the state’s real attractions.”
[/pullquote]
Linda grew up in a series of houses on Honey-suckle Way in a working-class neighborhood in southeast Louisville in the 1950s. “I remember being 6, 7 years old on that street, riding my bicycle (a Wildcat-blue Schwinn) and wondering where I would go in my life and what I would do.”

The “where” turned out to be Los Angeles, the place Linda Cobb and her family moved when she was 15. “L.A. felt like a completely different world. I had an accent, which was pointed out to me on a daily basis.” She adjusted, though. Changed her hair and clothes. Stopped saying “y’all.” She made her life in California, but didn’t forsake her roots. “A lot of people who move to L.A. want to get away from their family or to lose their identity. That wasn’t what I wanted. I took shape in Kentucky.”

Eventually, she had a daughter, Alexandra Balahoutis, from her first marriage, and also worked in TV production and magazine publishing. When Linda met Jerry at a party, he was already producing films, though his first breakout hit, 1983’s Flashdance, was still years away. They discovered that they shared a love of movies and photography, and they both had roots far from Hollywood. (Jerry had grown up in a blue-collar neighborhood in Detroit.)

While he produced movies and TV shows that broke box office and ratings records, Linda wrote two novels, including the 1999 bestseller Dreaming Southern, about a teenage girl from Kentucky who moves to California. She also decided to support Kentucky writers, partnering with Louisville’s Sarabande Books to start the Linda Bruckheimer Series in Kentucky Literature. Every year, Sarabande publishes one book selected through a special submission process that’s open only to writers who are either current or former Kentucky residents, or whose books are set in the state.

Linda’s enduring connection to Kentucky owes much to her affection for her late grandmother, Alvah “Allie” Aschbacher, who grew up in a hollow called Bull Creek near Barbourville.  Allie was an industrious woman who Linda says, “was always sewing or darning socks or snapping green beans. If she noticed someone wasn’t moving fast enough, she would crack, ‘There’s no hustle in that bustle, is there?'”

Allie also loved to explore Kentucky’s back roads. So does Linda. “I love to just get in the car and drive around.  I don’t have a GPS. I hate that thing. I end up where I end up. That’s how I found Walnut Groves,” she says, referring to the nearly 200-year-old Greek Revival house just outside of Bloomfield that she found during a visit with Allie in the 1990s.  The property needed some attention, some affection, perhaps, and Linda bought it over Jerry’s initial objections. When he saw the place, though, Linda says, “He got a little misty-eyed. He fell in love.”

In the course of getting the house ready, Linda noticed that the empty buildings in Bloomfield’s faded downtown had once been lovely—and perhaps could be again. She has a passion for old buildings and has served on the National Trust for Historic Preservation. She bought building after building, eight in total, including Nettie Jarvis Antiques, which is named for Allie’s mother.

Another restoration project is The Olde Bloomfield Meeting Hall. Decorated with memorabilia that includes Bloomfield history, Cobb family photos, and souvenirs from Bruckheimer-produced movies, the Meeting Hall offers pool tables, a four-lane bowling alley, a soda counter, and a skating rink. Dana Ashley is a Bloomfield resident who sometimes goes skating or bowling with her husband and children there. She says she’s grateful to the Bruckheimers. “It’s really nice to see the town come back to life.”

Bloomfield is particularly lively on the afternoon of Jerry’s book signing. Linda is in full-on hostess mode, talking to everyone—farmers, teachers, children, the old and the young. Kentucky Congressman John Yarmuth stops by. So do Governor and Mrs. Beshear. There are handshakes and hugs. Daughter Alexandra is on hand, too, and says of her mother, “She’s an artist when it comes to detail. She’s passionate about restoring things to their optimal state and creating an environment where people can enjoy themselves. She’s like a mogul, but what she does isn’t commercial. It’s personal.”

Bloomfield on the mapLinda Bruckheimer says that sometimes people in Bloomfield come up to her and say, “Thank you for saving our town.”

“It’s flattering,” she says, “but the truth is that one or two people can’t save a town by themselves.”

“Several of the buildings had been vacant for some time,” Hagan says. “Now they’re occupied and serving customers and that’s helped the town economically.” She says those renovated spaces can also house events that bring people into town. The Olde Bloomfield Meeting Hall hosts Valentine’s Day and Halloween dances as well as civic gatherings and class reunions.

Still, Hagan says, helping Bloomfield reach its economic potential is an opportunity and challenge for all of the community’s 1,038 residents. “We’re working very hard (to promote Bloomfield) because we’d like to see more people traveling through our community,” Hagan says from her office in City Hall, which is located in an old train depot. Agritourism is one avenue Bloomfield is exploring. The town is also planning to create a nature trail around the lake at Bloomfield Memorial Park.

Hagan encourages history buffs to visit Bloomfield, in part because the town is, in a sense, older than Kentucky itself. While the town was incorporated in 1819, the first settlers came here in the late 1700s, before Kentucky separated from Virginia in 1792. One of the houses built then is still standing. In fact, Bloomfield’s entire downtown district is in the National Register of Historic Places, including, among several others, an 1899 Victorian Painted Lady-style house, which is home to historic Eagle Hill Manor bed and breakfast.

To further the town’s historical ties, Hagan worked with the governor’s office to relocate overhead power lines underground and remove the nondescript modern streetlights, replacing them with a set of lights designed to match the aesthetic of the restored 19th-century facades.

On a recent visit to Bloomfield, Kentucky Governor Steve Beshear praised the partnership between the Bruckheimers and the town. “They’ve created a lot of excitement. What they’ve done here has really put Bloomfield on the map. It’s nice to see a small town like this that’s so vibrant.”

Web Exclusive: Linda’s favorite KY spotsLinda Bruckheimer and her husband, film producer Jerry Bruckheimer, have traveled the world for work and pleasure, but Kentucky remains one of their favorite places. “We both love Kentucky,” she says.

The couple has a 1,600-acre farm in Nelson County, not far from where Linda grew up in Louisville. Linda says that sometimes when she meets people in Hollywood or elsewhere who learn about her affection for the Bluegrass State, “They say, ‘What do you do in Kentucky?'” she says with a chuckle. She has answers, though the bestselling novelist prefers to show instead of tell. When she’s hosting friends or business associates who haven’t visited Kentucky, Linda often likes to take them on a little road trip.

“I like dirt roads, scary roads, do-not-enter roads,” she says. If her guests are more accustomed to freeways than back roads, she might take it easy on them and just start with a drive along U.S. 62 between her home in Bloomfield and historic Midway. It’s a rich one-hour ride through rolling hills and past the signature dry stone walls built by hand in the 1800s. Afterward, they might look in a few shops or stop for lunch at one of Midway’s well-regarded restaurants like Heirloom or Holly Hill Inn.

From there, Linda and company might drive through horse country. “Everyone wants to know where the horse farms are,” Linda says. There’s also the Bourbon Trail. Maker’s Mark in Loretto isn’t far, and neither is Woodford Reserve just outside Versailles, both of which offer tours Linda recommends.

However, one of her favorite distilleries—at least to drive past and photograph—doesn’t let visitors behind its walls, at least not yet. “I love Old Taylor Distillery,” she says.

Located in the Woodford County community of Millville, Old Taylor has been closed since 1972, though it’s being refurbished and its ornate, castle-like exterior makes it worth a stop and a picture or two. On tours like these, “I take photographs the whole way,” Linda says. In fact, she’s working on a photo exhibit of pictures she’s taken in Kentucky.

Come dinner time, she might take guests to the Old Stone Inn in Simpsonville, Claudia Sanders Dinner House in Shelbyville, or Kreso’s in Bardstown.

For the most part, Kentucky’s engaging people and scenic countryside are the real attractions, Linda says. Whether she’s playing Bluegrass tour guide for friends or just cruising on her own, “When I come back at the end of the day, I’m as happy as I’ve ever been.”