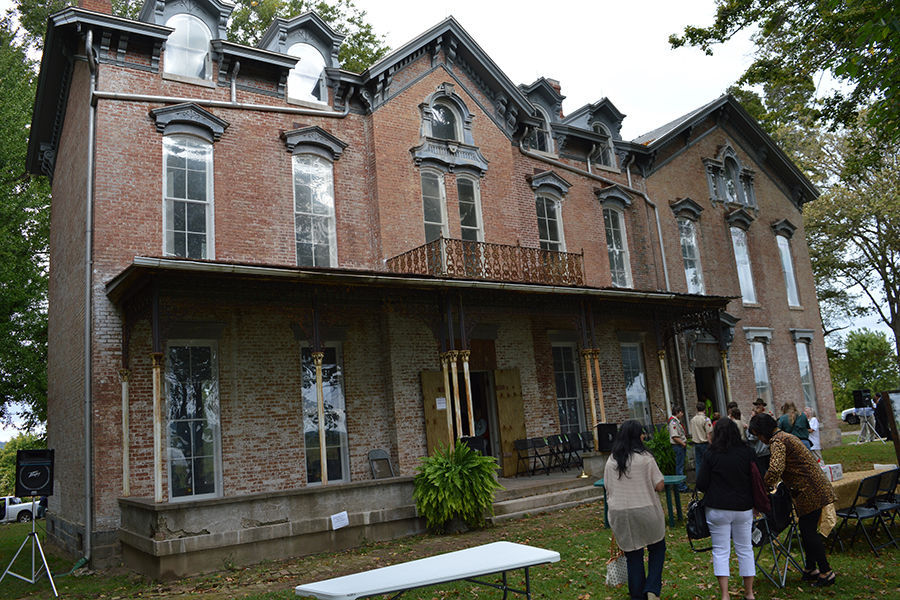 “I know this sounds strange, but it’s the truth,” Susan Dyer says. “I could feel sadness coming from the house. I could also see the beauty this place still has. And I knew something had to be done.”

Dyer is talking about the day in 1997 when she and her husband stopped to take a closer look at a long-neglected 19th-century home on KY 144 in Breckinridge County. It was the home of Judge Joseph Holt, a crucial ally of Abraham Lincoln. Holt’s name may be absent from most history books, but thanks to true believers like Dyer, his home and his legacy are making an improbable comeback.

At last year’s event, more than 2,000 people visited, touring the home and taking in songs of the 1800s, cannon blasts, and a baseball game played by Civil War-era rules (learn more on our website). The keynote speaker for the day was historian Elizabeth Leonard, author of Lincoln’s Forgotten Ally: Judge Advocate General Joseph Holt of Kentucky.

Holt was born on this property in Stephensport near the Ohio River in 1807. Leonard says when Holt was a boy, he liked to read and was quiet, but principled. While attending St. Joseph’s College in Bardstown, Holt was accused by an instructor of plagiarism because he couldn’t believe a teenager could have written something so articulate. “Holt was so angry that he left the school and walked all the way home,” a 70-mile journey, she says.

Holt’s fierce intellect and sense of integrity served him well. After completing his studies at Centre College and making a name for himself as a lawyer, he moved to Washington, D.C., where he served as commissioner of patents, postmaster general, and secretary of war. Holt also worked to keep Kentucky from seceding from the Union. That put him at odds with many of his Kentucky relatives, who shunned him for years.

In 1862, President Lincoln named Holt the U.S. Army’s first judge advocate general (JAG). According to Leonard, “One of Holt’s jobs was to enforce the Emancipation Proclamation.” Holt had been a slaveholder for much of his life, but, says Leonard, “He became a strong advocate for freed slaves both during and after the war.”

Holt achieved his greatest national prominence when he served as chief prosecutor in the 1865 trial of the Lincoln assassination conspirators. Leonard’s book quotes a Harper’s Weekly article that named Holt “among the most illustrious Americans” and a Boston Post story described “The rush of visitors yesterday…to grasp the hand of Joseph Holt,” after Holt had given a speech. Leonard says, “He’s the most important member of Lincoln’s administration to be forgotten by history.”

Raising his profile
Dyer is determined to change Holt’s forgotten status. For 19 years, she’s been a relentless advocate for the man and the house he left behind. She’s spoken to many elected representatives and government entities that might be able to help, from the Breckinridge County Fiscal Court to the U.S. Department of the Interior.

Along the way, responses ranged from unreturned phone calls to “this will never work,” to “keep the faith.” Dyer joined the board of Breckinridge County Historical Society. She also started writing grants, with guidance from the Kentucky Heritage Council. Her efforts have yielded more than $1 million from the state, Brown-Forman, and the National Trust for Historic Preservation, among others.

There’s still work to do. Decaying paint and wallpaper cover the walls of the house’s interior, among other issues. Dyer hopes to have the restoration complete within the next two years.

Even so, schools are starting to book field trips to the house. There’s already been a wedding on the property. The Indiana National Guard held a JAG training session there in March.

Dyer retired from teaching middle school in 2003, wrote her own Holt biography in 2009 (Lincoln’s Advocate: The Life of Judge Joseph Holt), and averages 20-25 volunteer hours a week on the house.

“People ask me what my pay is for doing this. My pay is when I see school buses pull up. When I see children walking through the home,” Dyer says.

She keeps going because, in her words, “This house has a story to tell.”

The old ball game
Part of the celebration at the annual Holt Home Community Day includes throwback features like organ-grinder music, Civil War re-enactors firing a cannon, and a baseball game played by the 1860s rulebook.

The game—known then by other names including “goal ball,” “barn ball,” and “old cat”—is largely unchanged, though modern fans would certainly notice the following distinctions:

Get a closer look at the annual festivities at the Judge Joseph Holt Home.