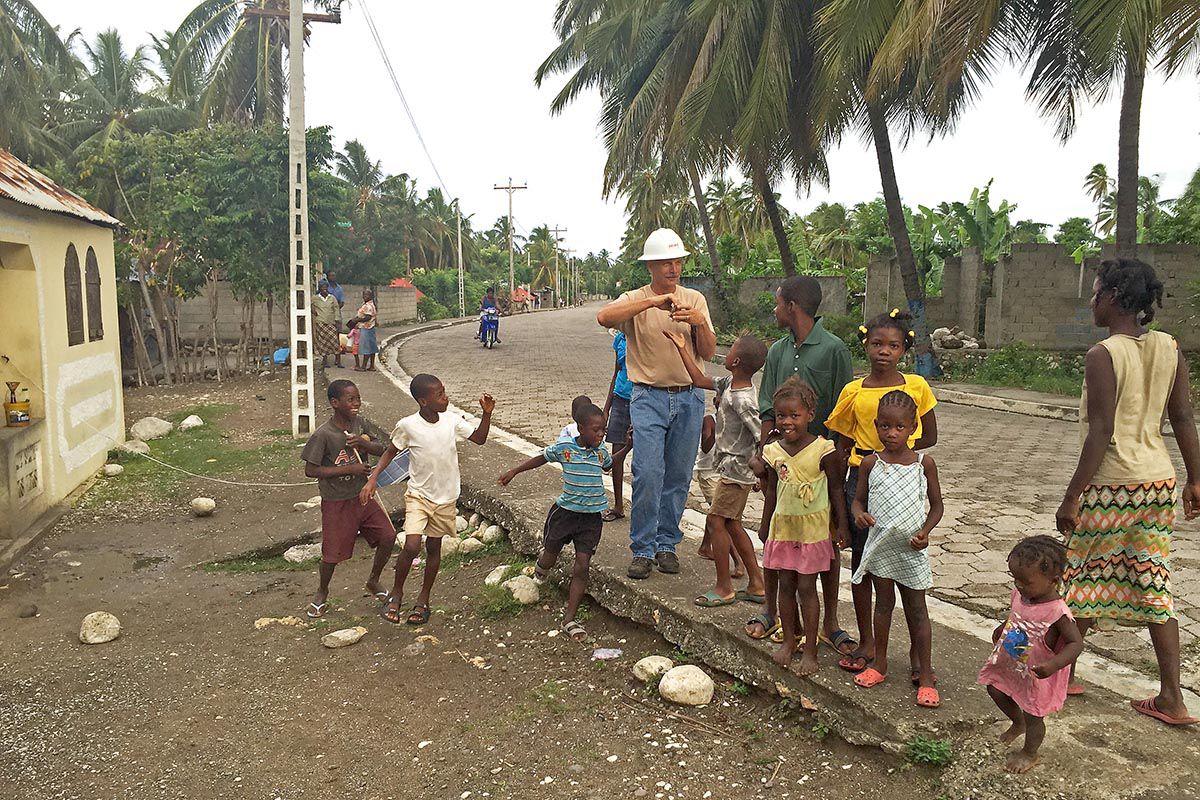 For the children in Coteaux, Haiti, 24/7 electricity is a foreign concept. But seeing American volunteer linemen, like Vince Heuser, vice president of System Operations at Nolin RECC from Elizabethtown, in their town working to bring electricity (and getting treats and toys from them) is becoming a regular part of life. Photo: Tommy Sullivan

[soliloquy id=”5660″]
In late March 2015, three linemen from Nolin Rural Electric Cooperative in Elizabethtown volunteered their time to work hard for families living in three small towns 1,500 miles away from their own.

Chad Denney, Vince Heuser, and Tommy Sullivan spent three weeks in Haiti to help bring safe, affordable, and reliable electricity to the communities of Coteaux, Port-A-Piment, and Roche-A-Bateau, located about 150 miles from the capital, Port-au-Prince. In support of the National Rural Electric Cooperative Association International’s mission to electrify areas in need, the three worked alongside two local linemen to build and upgrade power lines for the newly established electric cooperative in the region, the Cooperative Electrique de l’Arrondisement des Coteaux.

Though Nolin RECC had donated equipment to NRECA International program efforts in the past, this trip was the first time the co-op had sent volunteers for some manpower.

Fellow Kentucky linemen from Owen Electric Cooperative in Owenton helped prepare the Nolin volunteers for their trip. Owen Electric Co-op workers Mark Greene, Matt Greenlee, and Bobby Von Bokern, who volunteered for the project rotation in early January, met up with Denney, Heuser, and Sullivan to talk about what to expect.

“It’s an experience unlike any other I’ve ever had,” said Greene, whose career spans 36 years of line work with Owen Electric Co-op.

Many tasks performed in Kentucky with up-to-date tools and equipment were performed by hand in Haiti. Despite limited resources, the men were able to complete their work.

“The Haitians seem to deal with life so well and work together without the high-tech tools to get the job done,” said Sullivan. “I’m so blessed to have had the opportunity to make a difference in so many ways by helping to provide electricity to these wonderful folks.”

NRECA International efforts have provided 110 million people in 42 countries electricity over the past 50 years, and in southwestern Haiti, the Kentucky linemen from Owen and Nolin worked to increase that number of people.

When construction is complete, a solar-diesel hybrid power generation system will serve more than 1,600 member-consumers in the southwestern Haiti area. Managed by NRECA International, the project is jointly funded by the United Nations Environmental Program, the U.S. Agency for International Development, the Inter-American Development Bank, and the NRECA International Foundation.

Though the work was demanding, grasping the harsh reality of those living in these communities and the levels of poverty was harder for the linemen.

“The distance from my house to Coteaux is 1,524 miles. I think about that distance and the number of luxuries we enjoy every day; and it just makes me appreciate my life, my family, and my community,” says Denney.

The linemen were welcomed into the communities, playing pick-up soccer with kids on roads or beaches. These children, and generations to come, will benefit from better education, safety, healthcare, and economic opportunities from the electric lines that their soccer pals are helping to build.

Helping Haiti
Through its mission to electrify areas in need, NRECA International is not only spreading electricity throughout Haiti — it’s spreading happiness. With electricity, families are opening restaurants and even Internet cafes, leading to more and more economic growth.