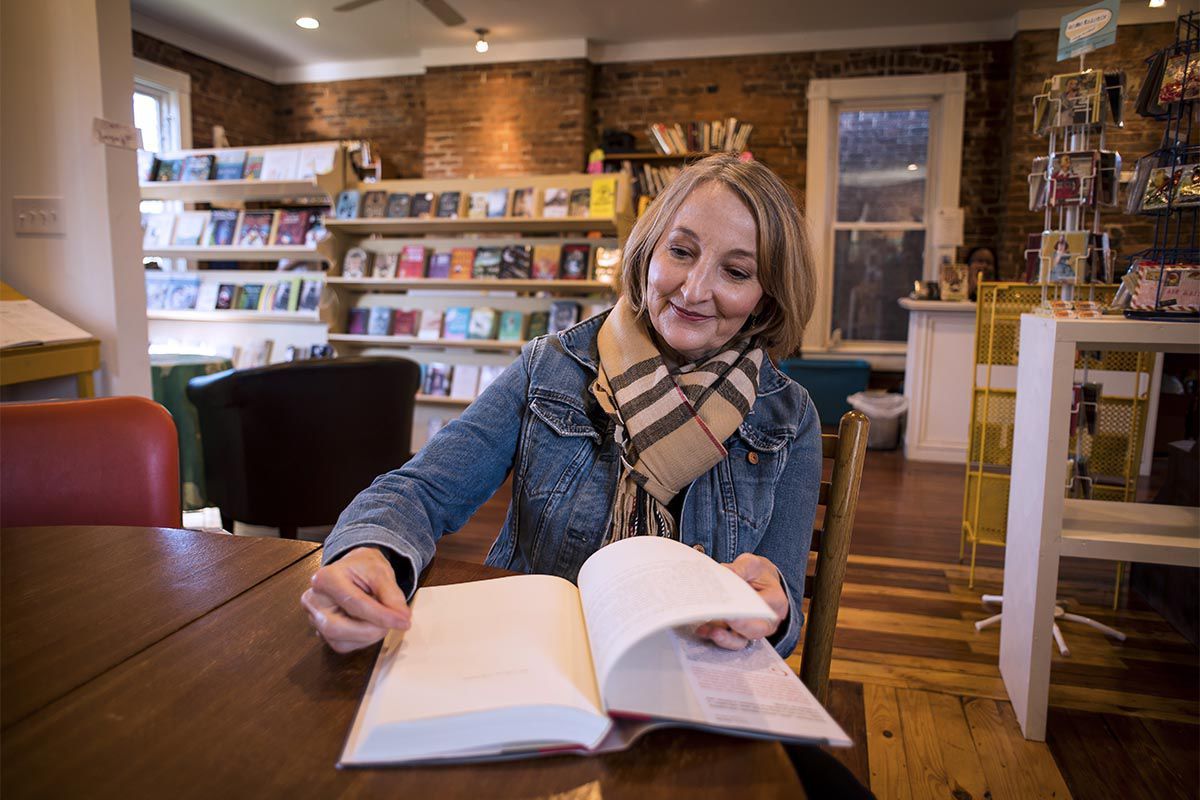 Jayne Moore Waldrop worked as an attorney for nearly 15 years before looking for a more creative lifestyle. With several years as a full-time mother in between, Waldrop found the way to creativity through the low-residency Master of Fine Arts in Creative Writing program at Murray State University.

Kentucky has long been a haven for writers, producing literary talent as thick as a field of goldenrod. Now, in addition to nurturing homegrown talent, the Commonwealth is widely known as a place for educating emerging writers—like Waldrop—from Kentucky and beyond.

Three Kentucky institutions are leading the way. Murray State in Murray, Spalding University in Louisville, and Eastern Kentucky University in Richmond all offer a low-residency (mostly off-campus) MFA in Creative Writing, an increasingly popular degree geared toward students both fresh from undergraduate work and those “in the midst of life,” as Spalding’s program puts it, allowing them to pursue their literary dreams while also juggling full-time jobs.

The programs aren’t for the faint of heart. They are rigorous, requiring a deep commitment to learning literary craft, producing new work, and making constant revisions. They work like this: twice a year, students across a variety of literary genres convene on their respective campuses for nine to 12 days of intense study that includes attending writing workshops—in which work is critiqued by faculty and classmates—lectures about their craft from faculty and visiting writers, and readings.

Back home, students then work individually throughout the semester with a faculty member in their chosen genre, receiving the close, personal attention from a respected author that every budding writer desires. Although designed for students to graduate in two years, the programs typically allow for flexible scheduling of semesters to accommodate changes in students’ lives.

Murray State University
Last year, Murray State’s MFA program celebrated its 10th anniversary, a feat that director Ann Neelon calls “gratifying.” As the only current faculty member there at the launch in 2004, she savors the years building the program and lists many milestones, including Murray’s 2014 ranking as the seventh-best in the nation by Poets & Writers and a Pushcart Prize for an author published in its magazine New Madrid. But for Neelon, the most impressive achievement is more basic: “At Murray, students can still get a superlative MFA education at an affordable price.”

The emphasis on quality made Murray’s program a perfect fit for Waldrop. “(The program) changed my outlook on story, on observation, on being able to step into the shoes of the characters I’m creating to write from that point of view,” she explains. “Sometimes it feels like I’ve got a roomful of imaginary friends hanging out in my office, waiting their turn to speak.”

Murray’s sterling faculty includes award-winning writers, such as Karen Salyer McElmurray, Nickole Brown, Jeffrey Skinner, Lynn Pruett, Elena Passarello, Tommy Hays, Blas Falconer, Gary Jackson, and Julia Watts, who teach fiction, creative nonfiction, and poetry. Watts, the author of 14 novels, says her teaching philosophy is straightforward and tailor-made: “I try to work with each student to reach his or her own individual writing goals. My goal is not to let my own tastes and preferences influence students’ writing, but to help each student develop and nurture his or her own voice.”

Beyond its on-campus residencies each January and July, in 2016 Murray will launch its Ireland Summer Program, a long-held dream of Neelon’s. Based at University College, Dublin, the program will fulfill one of three required literature courses, she says, with additional courses and a full residency being considered as future offerings.

Spalding University
Since the program’s founding in 2000 by best-selling novelist Sena Jeter Naslund and fellow writer Karen Mann, Spalding University has been home to one of the nation’s premier low-residency programs, with consistent top 10 rankings in Poets & Writers magazine and rated among “The Best of the Best” in The Atlantic. “Before the Spalding (program), there was no MFA of any kind in creative writing in Kentucky,” explains Naslund, the program’s director.

Her vision includes degree concentrations in a variety of genres “to create a paradise for serious students and gifted faculty who are also active, published writers.” Those genres encompass fiction, poetry, creative nonfiction, writing for children and young adults, and more recently, playwriting and screenwriting. Among the graduates of Spalding’s earliest classes are celebrated Kentucky writers Crystal Wilkinson, Silas House, and Frank X Walker. Over the years, Spalding alumni have produced more than 300 books, films, and plays.

“The program gave me a new angle from which to examine my work,” says Wilkinson, who now teaches in the program with House and other respected writers, including Kathleen Driskell, Neela Vaswani, Kirby Gann, and Fenton Johnson. “(It) gives you connections to like-minded people, steady deadlines, contacts in the publishing world, and for me it was essential to my growth as a writer.”

Wilkinson seeks to “meet students where they are,” observing, “Writers are often looking for the kind of magic in an MFA program that will take their writing to the next level and get them published, but I try to get students to know what is magical about their own writing and how to reach (their own) magic if it is not there.”

During residencies in May and November, students are housed at The Brown, a plush hotel that borders Spalding’s campus in downtown Louisville. The program also offers a study-abroad residency each summer—recent excursions were in Greece and Ireland—and the opportunity to gain editorial experience at The Louisville Review, a nationally known literary magazine, and the Fleur-de-Lis Press.

Bluegrass Writers Studio at Eastern Kentucky University
When it began in 2009, EKU’s Bluegrass Writers Studio (BGWS) aimed to be a different kind of program—a “hybrid,” says director and professor R. Dean Johnson, allowing “students to enjoy the conveniences of a low-residency program without sacrificing the writing community they’d find in a traditional program.” To achieve this, BGWS implemented a weekly online workshop for students during their off-campus semesters, giving them a forum to critique new work and discuss readings in between residencies. This feature, along with Web-based literature courses that include discussion boards, helps to foster what Johnson calls a “collaborative learning experience” beyond students’ individual work with faculty members.

In Johnson’s teaching—and that of acclaimed writers Julie Hensley, Nancy Jensen, Young Smith, and Carter Sickels—the focus is craft and exploration. “We strive to make our students better writers,” he says, describing how he challenges students to work in more than one genre and attempt hybrid forms to “(expand) their own possibilities.”

This approach attracted Jay McCoy, a poet from Lexington and 2015 graduate. “The program gave me more opportunity to focus time and energy on honing my craft while exploring an expanded width and breadth of writings and readings, from classical to contemporary and across genres.”

At BGWS, those genres aren’t simply confined to the standard literary fields of fiction, creative nonfiction, and poetry that are usually offered in low-residency programs, but also include popular or “literary genre fiction”—such as science fiction—which are treated “as legitimate and compelling forms of literary art,” according to the program’s Web site.

The program’s January residency is based in downtown Lexington. Its summer residency takes place abroad, with destinations like Portugal and Scotland serving to “(dislocate students) from what is familiar and easy” to serve their art. Johnson says the program will also offer a summer residency in the Bluegrass for the first time in 2017.

Applying to these programs
Spalding University’s MFA in Writing Apply online at www.spalding.edu/academics/mfa-in-writing. The application deadline for the fall semester is August 1; for spring and summer, the deadline is February 1.

Murray State University’s MFA in CREATIVE Writing Apply online at www.murraystate.edu/MFA. April 1, 2016, is the application deadline for those interested in beginning the program with the July 2016 residency.

Bluegrass Writers Studio at Eastern Kentucky University’s MFA in CREATIVE Writing Apply online at www.creativewriting.eku.edu. Completed applications are due at least three weeks prior to the scheduled beginning of any semester. However, students applying to begin during a summer residency should submit their applications by March 31 of the same year.

University of Kentucky builds on its literary tradition
In the fall of 2014, after years of planning, the University of Kentucky offered its own MFA in Creative Writing degree in a traditional, full-residency program. It promises to build on the deep literary history at the university, which claims luminaries such as Wendell Berry, Bobbie Ann Mason, Jane Gentry Vance, James Baker Hall, Guy Davenport, Nikki Finney, and Kim Edwards as past teachers in the English Department.

Directed by Julia Johnson, the new program “places equal emphasis on fostering the artistic process of the MFA student, as well as his or her literary study and related creative or scholarly work,” according to its Web site. Students have the option of concentrating their studies in one genre—fiction, creative nonfiction, or poetry—or taking a cross-genre track, studying with writer Gurney Norman, creative nonfiction writer and poet Erik Reece, novelist Hannah Pittard, and former Kentucky Poet Laureate Frank X Walker, among others.

First-year fiction student Gary Thomas Smith, a native of Virgie in Pike County, is currently working with Pittard and plans to study with novelist and short-story writer Manuel Gonzales in the spring, with the goal of “building a strong body of work.” With writing, classes, and teaching English composition, Smith says he’s busy, but loving the experience. “It forces you to consider what you really want to achieve,” he says. “For me, it’s stressful but still worthwhile. I’m reminded that writing is beautiful, important, and that it’s a world that I want to be a part of.”